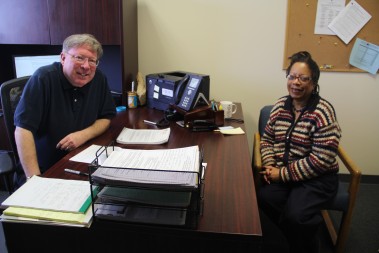 FORT WAYNE — With the uncertain economic situation in the U.S. many are finding it difficult to find adequate employment, especially those considered to be part of the over 55 senior population. Fortunately, Catholic Charities in the Diocese of Fort Wayne-South Bend currently offers a program to address just that. Senior Community Service Employment Program (SCSEP) offers assistance to eligible low-income seniors, age 55 and older, in finding employment opportunities by building confidence and skills through temporary paid on-the-job training in community service positions.

Chris Smith, SCSEP project director, says the program currently serves 103 participants across six counties, including Adams, Allen, Dekalb, Huntington, Whitley and Wabash, who have found the program not only through word of mouth but through informational fliers distributed throughout the community and online as well.

Funded by grants through the Department of Labor, participants whose skills and interests are matched to paying community jobs are considered employees of the Title 5 job-training program.

For acceptance into the program, applicants must be 55 or older and live at 125 percent of the federal poverty level. Those with a domestic violence or crimes against children criminal record are not eligible for the program.

Smith says the program has assisted seniors in the 55 to 75 year old range with the oldest being 88. Following the top priority of placing veterans and those with disabilities for the program, Smith says, “Then the most in need are those with low literacy skills, limited English-speaking skills, the homeless or at risk of being homeless.”

After completing an application and the interview process, Smith analyzes the information and matches the qualified applicant with a host agency that will benefit both. Host agencies are required to be government or non-profit organizations to participate in the program and currently include schools, libraries, social service agencies, hospitals senior centers and museums. St. Vincent de Paul and Urban League are only two of the network of agencies with which Smith works.

SCSEP participants typically work 20 hours each week at $7.25 an hour. The hands-on training hours last from six to nine months and do not provide benefits. Participants must apply for unsubsidized employment through their stay in the program. “We want to get them in, train them and then get them unsubsidized jobs. Then we can bring someone else in. It’s a real program— hands on. A very workable deal,” says Smith, adding that many host agencies hire the trainees as permanent employees.

Participants can utilize the program for up to four years. “But we like to try and keep it around a year,” notes Smith. Catholic Charities also offers assistance with computer skills so participants can apply for jobs online.

The SCSEP, formerly known as Senior Aides, was founded in 1976 at Catholic Charities, Smith reports, with the idea to “get seniors out and active in the community with pay to help them financially.”

“It was a social welfare program then, but has evolved to job training to get a job,” says Smith, noting that he provides his clients with resources and referrals, and bus passes as well. “We want them to be successful as Christ would have us do. … We treat these people with dignity and respect. … This is a ministry — very practical,” he says.

Some participants find themselves moved from one job to another when issues arise. “Many haven’t worked in a long time. We take baby steps — always looking for the right fit,” says Smith. “We’re patient but persistent.”

Eliza Jackson is one success story of the SCSEP. A native of Fort Wayne, Jackson worked at Superior Essex for 31 years eventually as an administrative assistant. After a lay-off in 2009 she found herself in the unemployment line, too young for retirement. Temporary employment helped pay the bills but she felt trapped. “I stumbled over the (SCSEP) on the computer,” says Jackson, who admits when she saw the age requirement she hesitated because, “I didn’t feel like I was a senior.”

Following her application she received a call and an interview and felt it was the right move at the time. She was matched first at the Women’s Bureau where she used her administrative skills for a year. United Way was a second match where she stayed for two years. “Then I rotated to Catholic Charities and in less than a year I was asked if I was interested in permanent work,” says Jackson.

Currently Jackson works four days a week, three as a case manager for SCSEP and one in Resources and Referrals. “I enjoy it. I stay busy. I like the people I work with and enjoy working with the clients. … To find something you like doing! Everyday I say, ‘Thank you, Lord, for my job!’” she says, adding enthusiastically, “It’s a great program!”

Smith notes that as the program evolves, he is always looking for new participants as well as new host agencies. “If they are looking for talented, experienced, trustworthy people, call me,” he says.