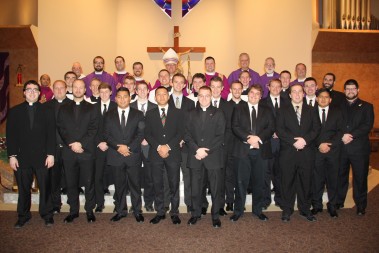 By Tim Johnson and Kay Cozad

FORT WAYNE — Seminarians of the diocese gathered with their parents at St. Elizabeth Ann Seton Parish in Fort Wayne on Dec. 22 for a pre-Christmas celebration hosted by the Serra Club of Fort Wayne.

At the Mass before the luncheon, Bishop Rhoades spoke of Mary’s Magnificat, the day’s Gospel. The Magnificat is a canticle that priests and seminarians pray every day at Evening Prayer.

“When we pray the Magnificat, we join with Mary in praising God for His mercy,” Bishop Rhoades said. “We say with Mary that God ‘has mercy on those who fear Him in every generation.’ We say with Mary that God ‘has come to the help of His servant Israel, for He remembered His promise of mercy, the promise He made to our fathers, to Abraham and his children forever.’ In a sense, the Magnificat is a hymn of praise of God’s mercy.”

“Twice Mary recalls God’s mercy, both in the past and in the present and future,” Bishop Rhoades added. “In fact, she says that His mercy is from age to age, from generation to generation. This includes our generation! God’s mercy endures. His loving kindness, His mercy, endures forever, as we pray in the psalms.”

Bishop Rhoades said, “Pope Francis, like Pope St. John Paul II, recognizes that we need to focus on this attribute of God because the world is in such great need of God’s mercy. In the midst of sin, oppression, poverty, war, violence and terrorism, we need God’s mercy. As in days of old, we pray that God will come to our aid, that He will remember His promise of mercy.”

Bishop Rhoades said it is good to ponder the words of the Magnificat “and make them our own.”

He told the seminarians, “You are preparing to be instruments of God’s mercy as priests of His Son, the Son who is the face of the Father’s mercy. All of us, priests and lay faithful, are called to be witnesses to this mercy.”

At the luncheon following the Mass, Barb and Tom Neizer of St. Elizabeth Ann Seton Parish, joined their son Daniel who is in his fifth year at Mount St. Mary’s in Emmitsburg, Maryland. Barb said of the celebration, “It’s just a beautiful witness to see all of them together and to see how blessed our diocese is with young men discerning and to see the beautiful family support with both the priests and the parents. It’s just wonderful!”

Tom added, “It’s rare when we’re able to see all the group together with their parents especially this time of year at Christmas. It’s a real joy. And everyone is so happy!”

Father James Shafer, pastor of St. Elizabeth Ann Seton, is pleased that the parish has six seminarians and anticipates more.

“Seminarians are a big part of our parish community,” Father Shafer said. “We showcase our seminarians as much as we can.”

“We keep them up in front of the people,” Father Shafer said. “The people pray for them. The people in this parish love these guys. In many different ways they show that love for our seminarians.”

“I think anything we can do with the seminarians as a parish is tremendous and a privilege,” Father Shafer noted.

Another of the six St. Elizabeth seminarians is Jay Horning, a second-year theology studies seminarian at Mount Saint Mary’s in Emmitsburg, Maryland. He said, “I think the beauty of this luncheon is not just to bring our families together, which is a blessing for me. My family is not Catholic. They get to experience some of the Church and see what it is like. It makes it a little bit easier for them.”

He was also thankful for the Serrans, “who pray for us constantly,” Horning noted. “Knowing that we have these prayer warriors back home, makes being away at school a little bit easier to bear.”

Gabriol Alvarez and his family had traveled from Elkhart where they are parishioners of St. Vincent de Paul Parish to be a part of the day’s celebration along with their son Jonathan. He is in his second year of seminary training at Pontifical College Josephinum in Columbus, Ohio. Alvarez said, “It’s exciting, you know, to be with all the families and it’s really nice for me being with my son at this time of year.”

Sandy and Scott Kruse, parishioners of St. Vincent de Paul Parish in Fort Wayne, joined their son Caleb, who is also in his second year at Pontifical College Josephinum. Sandy felt being at St. Elizabeth Ann Seton Parish for this celebration was a gift. “Especially this Year of Mercy — it’s a time of forgiveness. And just sharing the time with other seminarians and their families. We’re very appreciative that the diocese does this.”

Seminarian Nathan Maskal, who is from St. Charles Borromeo Parish, Fort Wayne, is doing a pastoral year at St. Mary of the Assumption Church in Decatur and has two years of studies ahead of him.

“This is a chance for us to meet the Serra Club, who are kind of our benefactors and support us throughout the year,” Maskal said. He also appreciated the Mass with Bishop Rhoades and the opportunity to catch up with the seminarians who do not all study at the same location.

Dominic Garrett, a seminarian in second-year college at the Josephinum in Columbus, Ohio, said, “I think it is nice to get together with all the seminarians, coming back after a long semester, getting together and catching up with everybody.”

Garrett was also thankful his parents Jason and Sharon Garrett could join him for the Mass and luncheon.

Sharon Garrett said, “It’s exciting to see how our Church is growing. We have so many young men opening their hearts to serving the Church in such a way that no one else can.”

She said that in the fall, the parents of seminarians began meeting once a month — at the suggestion of Father Andrew Budzinski, vocation director — in a casual environment.

James Andrews, a Serra Club member and organizer of the luncheon, told Today’s Catholic that Serra Club hosts this luncheon in appreciation for the seminarians. “We support them from the day they start (studying in seminary) until the day that they are ordained. We are behind them, we are praying for them, we keep in constant communications.”