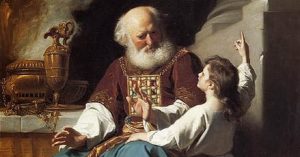 The First Book of Samuel is the source of the first reading for this weekend. Originally, First and Second Samuel were one volume. At some point in history, an editor divided them into the two volumes, so two volumes appear in Bible translations today.

As the title of these books implies, the central figure is Samuel, a prophet active centuries before Christ. Prophets were highly revered throughout the history of the chosen people. They were seen as God’s special representatives, but also personally very holy and devoted to God.

At times, prophets resisted their calling initially. Such was the case of the great prophets, Isaiah, Ezekiel and Jeremiah. However, after all was said and done, they accommodated themselves to God’s will and accepted the call to be prophets. These figures were admired because the call to be a prophet was seen precisely as a call, as a call from God.

In this weekend’s reading, God calls Samuel. This occurs according to God’s plan. Samuel is open to hearing God, indeed ready to hear God, but Samuel cannot hurry the divine plan.

St. Paul’s First Epistle to the Corinthians supplies the second reading for this weekend. Many of the Pauline writings have their luster in their clear revelation of the bond between true believers and Jesus. Jesus was the Son of God, but also human, in a mystery theologians call the Incarnation.

Truly committed Christians, in faith and baptism, are inseparably bound to Jesus, both in a shared human nature, but also in the divine life given believers by Christ. This supernatural bond, the very keystone of personal salvation, requires Christians not only to be of spiritual faithfulness, but bodily faithfulness as well. They must not allow themselves to fall into carnal sin.

Instructing the Christian Corinthians in this fact seems, for some, to be excessive for Paul. However, it should be remembered, Corinth was known near and far as a virtual capital of lewdity and vice.

St. John’s Gospel furnishes the last reading. It is a story about the decision to follow Jesus by Simon, later known as Peter, and Simon’s brother, Andrew. In the story, Jesus intrigues Andrew and Simon. They follow Jesus. The Lord invites them to be apostles. They recognize Jesus as Messiah. Jesus calls Peter to a new life, even giving him a new name, Cephas, often translated as Peter.

The Church, in the majesty and glory of its liturgy, in a profound gaze into the reality of Jesus, born in Bethlehem, recorded for us in the Gospels, called us all to celebrate the birth of Christ at Christmas.

The Church revealed to us on Christmas that Jesus was the son of Mary and therefore a human, as she was only human — despite her unique holiness and singular place in the divine plan of redemption.

Two weeks later, it celebrated for us the feast of the Epiphany, revealing to us the fact that Jesus, born in Bethlehem, was divine, the Son of God, and that redemption is God’s gift for all people.

So, these past several weeks have been times in which the Church, with the greatest joy and hope, has told us about the Lord. He is the Savior of the world!

Now, the Church asks us in the readings this weekend to consider how personally we shall respond to these marvelous facts. By the mere fact we are of the Church, or at least interested in God, we are being touched by God’s grace. God calls us. He offers us eternal life in Christ.

How should we respond? St. Paul gives very concrete advice. Samuel, Peter and Andrew are examples. We must follow Christ, the one and only way to true life and peace.