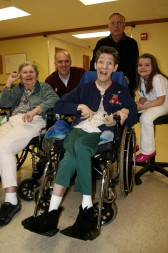 SOUTH BEND — When Richard LaSalvia and Daniel Philpott first walked through the doors of Cardinal Nursing Home to inquire about visiting the residents, the staff was happy to welcome what it figured would be another short-term round of volunteers. LaSalvia and Philpott were interested in establishing a South Bend branch of the Community of Sant’Egidio, an international lay movement that seeks to evangelize the poor through prayer and friendship.

With this vision in mind, they began spending time at Cardinal once a week, as LaSalvia describes it, simply “to make friends.”

Over 12 years later, LaSalvia and Philpott are still visiting their friends at Cardinal every week, together with the others who have joined them along the way. At the outset, the community was primarily comprised of Notre Dame students and professors, but it has also drawn members of local churches and parishes over the years.

While the Community of Sant’Egidio is now present in more than 73 countries worldwide, it began in Rome in 1968 with a group of high school and college students. Inspired by the Gospels and the example of St. Francis of Assisi, the students gathered for prayer and went out to meet those living in the slums.

The impoverished elderly were the first people the students encountered on the outskirts of Rome, so from the beginning the community has understood the impact of social isolation and sought to overcome it through friendship and shared prayer with the elderly in cities around the world.

LaSalvia and the Sant’Egidio community of South Bend have found their mission at Cardinal to be simple, but powerful.

“When we go to Cardinal, we meet Jesus in the elderly and we embody the good news of Jesus to them,” he says.

Among the nearly 100 residents at Cardinal are many who have no family and seldom receive visitors. LaSalvia says they have known residents who spent 15 or 20 years in the facility before passing away. The community has organized several memorial services over the years for residents who die without family to remember them.

Faithfulness to the elderly, LaSalvia says, is key to the community’s mission. While other volunteer groups have come and gone, Sant’Egidio has stayed.

The relationships the community has built at Cardinal transcend volunteer work, he insists.

When one resident of Cardinal passed away several years ago, LaSalvia says, his family found a drawer full of postcards that members of Sant’Egidio had sent him over the years. “They were so amazed. They came up to us at the memorial service and said, ‘James really did have friends!’”

“This is not volunteering,” LaSalvia says, “It’s friendship for life. It’s about creating a space to meet the elderly and to be transformed by them. Because they are the ones who change us; they evangelize us.”

Pope Francis, whom the Community of Sant’Egidio identifies as a “pastor from the periphery,” has spoken extensively about the dignity of the elderly and their role in the Church.

Sant’Egidio takes the biblical figures of Simeon and Anna as models for the encounter between the old and the young. The friendships formed at Cardinal over the years, LaSalvia says, are marked by lessons shared between the generations.

“It’s really beautiful to see how the elderly there are still practicing their Catholic faith,” says Angela Philpott, 8. A beloved young friend to many residents at Cardinal, she has been visiting the nursing home with her dad since she was 3. At a young age, she learned she could make a difference in alleviating the isolation of the elderly.

“It’s like the story about Jesus and the lepers. Other people didn’t care about them, but Jesus did,” Philpott explains. “The people at Cardinal are lonely and so when we go visit them, they feel loved.”

In addition to the weekly visits at Cardinal, Sant’Egidio holds a monthly prayer service at St. Matthew Cathedral, where parishioners are invited to join its mission of evangelizing on the margins.

“Our hope is to make people aware that social isolation is an important issue, because our population is aging,” LaSalvia says. He believes parishes should be taking up the cause of ministry to the elderly, as public institutions will become increasingly short on resources in coming decades.

“It’s about working towards a culture of life — not just the beginning, but also the end of life.”

LaSalvia was drawn to the Community of Sant’Egidio because it offered a path for lay people to radically live their faith, taking the Gospel to those most in need, all within the context of work and family life.

“It’s a way of living the Gospel without having to go anywhere. There’s a periphery in every city. You can go to the poor people of Buenos Aires, or the poor of South Bend and Fort Wayne. Prayer and friendship with the poor is a beautiful way to live God’s love and mercy in our daily life.”