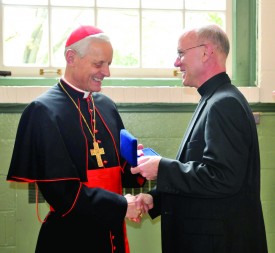 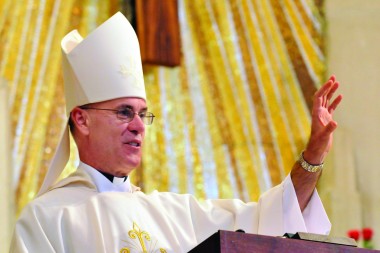 Bishop Kevin C. Rhoades gives the homily at the Archdiocese of Washington’s 21st annual Rose Mass, held March 18 at the Church of the Little Flower in Bethesda, Md. The annual Mass seeks God’s blessings on those who work in health care.

BETHESDA, Md. — Today’s Catholics can look to the saints as role models as they stand up for religious freedom, and as they care for the poor and sick in the healing professions, participants at the Archdiocese of Washington’s March 18 Rose Mass were told. The annual Mass — held to seek God’s blessings on those in the health professions — and the luncheon that followed were sponsored by the John Carroll Society, and held at the Church of the Little Flower in Bethesda, Md. Washington Cardinal Donald Wuerl was the principal celebrant of the Mass and Bishop Kevin C. Rhoades of the Diocese of Fort Wayne-South Bend was the homilist.

At the luncheon Cardinal Wuerl asked attendees who they would choose to be the patron saint of religious freedom. After mentioning several possible candidates throughout history, the cardinal asked consideration of St. Patrick, the 5th-century bishop and apostle of Ireland whose feast day was celebrated the day before the Rose Mass.

“The faith proclaimed by Patrick is the faith that comes to us from the Apostles,” said Cardinal Wuerl. “He’s one choice (as the patron saint for religious freedom) because of his courage to speak the truth, his fidelity to the Gospel, to the Church and to the pope,” in the face of what today would be described as an indication in the polls that he would not be successful. “His vision was, we can get beyond this political expediency (of this time) and build the kingdom of God.”

Cardinal Wuerl in his remarks alluded to the U.S. Department of Health and Human Services’ mandate, which would redefine what it means to be a religious organization and what constitutes ministry. While most houses of worship would qualify for a religious exemption, institutions such as Catholic hospitals, universities and social services would be forced to provide employee health plans that would pay for sterilizations, abortion-inducing drugs and contraceptives.

The nation’s Catholic bishops have strongly opposed the mandate, saying it threatens the religious freedom of Catholic institutions by forcing them to violate Church teaching.

Cardinal Wuerl noted that the nation’s Catholic bishops would be issuing a major document on religious freedom.

Washington Cardinal Donald Wuerl presents the John Carroll Society Medal to Bishop Kevin C. Rhoades, who was the homilist at the Mass. The medal is the highest honor bestowed by the John Carroll Society, a lay Catholic group of the Archdiocese of Washington that sponsored the Mass. The society of Catholic professionals and business men and women is named for Archbishop John Carroll, who in 1789 became the first Catholic bishop of the new United States, heading the Diocese of Baltimore, which at that time included all 13 original states.

The cardinal praised the witness of St. Patrick, who brought Christ and His teaching to the people of Ireland, enduring hardships over four decades, but ultimately converting them to the faith. The cardinal said St. Patrick’s example of living for Jesus and sharing the faith with others epitomized what it takes today to stand for religious freedom: “Don’t be afraid. Proclaim the Word (of God). Stand up for the truth. Be my (Jesus’s) disciple, even if it is not popular.”

The archdiocese’s 21st annual Rose Mass was held on the fourth Sunday of Lent, Laetare Sunday, when the vestments worn by the celebrant are rose colored. After Communion, the cardinal thanked the health workers for bringing Christ’s love and healing to those whom they serve.

In his homily, Bishop Rhoades noted that Laetare comes from the Latin word for “rejoice,” and Christians today should find joy in God’s love for them, a love reflected in Jesus’ death and resurrection. “How should we respond to this radical love of the Lord?” Bishop Rhoades asked. “A new way of thinking and acting should result from our personal encounter with the crucified and risen Christ.”

Those who work in the health professions today can look to a saint canonized 25 years ago — St. Giuseppe Moscati, a devout Catholic and early 20th century Italian doctor, medical school professor and pioneer researcher in the field of biochemistry — as a special patron saint.

“From his personal encounter with the Lord, St. Giuseppe Moscati was able to witness to the love of God, to live the truth of his faith every day in his care of the sick. His works manifested to all the light of Jesus Christ,” the bishop said.

Bishop Rhoades noted how the doctor, during his years in medical school and later as a teacher, kept his faith in an antagonistic environment, and he said that today’s Catholic medical students can draw strength from his example as they bear witness to their faith and stand up for the dignity of human life in all its stages and oppose abortion and euthanasia, as they defend the truth about human sexuality and as they study and defend Church-approved natural methods of regulating fertility.

Dr. Moscati “saw his patients as persons with a God-given dignity… In a word, he loved his patients, including the difficult ones. He saw Christ in the face of the sick and suffering,” the bishop said. He noted how the doctor regarded the poor and homeless as “his favorite patients. He would never accept any fee from them. Often when he would write a prescription for a poor person, he would put the prescription in a sealed envelope and secretly enclose money for the poor person to pay the prescription.”

Bishop Rhoades praised the Archdiocese of Washington’s Archdiocesan Health Care Network founded in 1984, in which participating health care workers offer their specialties in service to the poor and uninsured. He said that service, like that of St. Giuseppe Moscati, “is a witness to the Gospel, a witness to the love of Jesus for the poor and suffering.”

In concluding his homily, Bishop Rhoades noted how Dr. Moscati regarded his work as a vocation, a calling from God, and he said the future saint’s work was strengthened by his deep prayer life. The saint went to Mass every day and prayed before he cared for each patient, before he taught each class, and before he did his research. Bishop Rhoades encouraged the health care workers to weave their faith into their work.

“Your work in health care is indeed a vocation of dedication to and love of neighbor. … You are called to be living images of Christ and His Church in your loving care of the sick and suffering,” the bishop said.

At the Rose Mass luncheon, the John Carroll Society — a group of Catholic business men and women and professionals — presented Pro Bono Health Awards to three health care workers for their service to the Archdiocesan Health Care Network, which is administered by Catholic Charities and provides millions of dollars in free outpatient care to thousands of people in need through the generosity of volunteer nurses, doctors, dentists, podiatrists and area hospitals.

Also at the luncheon, Bishop Rhoades received the John Carroll Society Medal, the group’s highest honor. The society is named for Archbishop John Carroll, the nation’s first Catholic bishop, who was appointed in 1789 to head the Diocese of Baltimore, which at that time included all 13 original states.