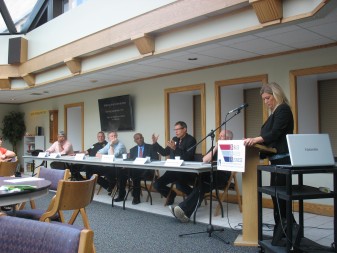 FORT WAYNE — An immigration reform roundtable was held at First Wayne Street Methodist Church in downtown Fort Wayne on Aug. 28 to foster a solutions-focused conversation. Faith leaders, law enforcement and business owners — Bibles, Badges and Business (BBB) — engaged in a discussion about immigration reform and why it’s important to these three sectors for Indiana’s economy and diverse communities.

Bibles, Badges and Business is a project of the National Immigration Forum, Washington, D.C., and the National Immigration Forum Action Fund. Similar coordinated roundtables are being held throughout the country for attendees to learn about the issue and become more educated about immigration reform as well as encouraging U.S. Congressional members to talk about the issue and, hopefully, vote for some common-sense solutions.

Angela Adams, Bibles, Badges and Business Midwest regional coordinator and an Indianapolis attorney, served as moderator and introduced the panelists, who spoke about why immigration reform is important to their particular sector.

In his remarks from the panel, Society of the Divine Word Father Lloyd (Sam) Cunningham, parochial vicar of St. Patrick Church, Fort Wayne, referenced the U.S. Conference of Catholic Bishops who support comprehensive immigration reform. Father Cunningham said the bishops’ reform proposal provides a path to citizenship for undocumented persons in this country. The proposal includes a worker program to permit foreign‐born workers to enter the country safely and legally and would help reduce illegal immigration and the loss of life in the American desert. The proposal contains positions that preserve and strengthen family unity, provide legal avenues for low-skilled immigrants working in the U.S., restore due process for individuals caught up in the immigration system and promotes efforts that will address the root causes of immigration, such as poverty and persecution.