Right to life participants march through the streets of downtown Fort Wayne as witnesses for life at the 39th annual Allen County Right to Life rally and march on Saturday, Jan. 19.

“And we as the Christian church have such a message. It is the message of the Gospel of Jesus Christ,” Lamb added.

And Lamb’s favorite thing to say is the “Gospel of Jesus Christ is the most positive, and the most powerful, life affirming, life changing message in the universe.”

The message, Lamb said, is tailor-made for issues of life and death, for pain and suffering, for issues of regret and grief and guilt.

“Christians have a positive and powerful message ‘To Speak’— the Gospel of Jesus Christ,” Lamb shared with Today’s Catholic. “It is tailor-made for the life issues.”

“We need ‘To Speak’ it to one another in the church so that more will see that these issues are more than political, but also spiritual,” he said. “We need to properly motivate more people to get out of their comfortable pews and into the public square. Then we need ‘To Speak’ to our society and bring our Christian influence to bear in a reasonable and loving manner, but never leaving behind the Word of Truth of the Gospel, for it alone has the power to bring true and lasting change. People with changed hearts will change society.” 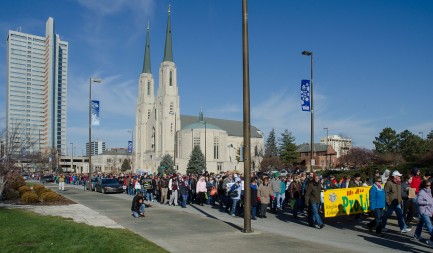 Human life has value because every human being is the work of God’s hands, Lamb noted in his address to the nearly-filled-to-capacity University of Saint Francis Performing Arts Center in downtown Fort Wayne.

“Every human being has value because every life is someone God desires to call into an eternal relationship with Him and hold them by the hand,” Lamb said, “created by God’s hands, redeemed by Christ’s hands stretched out on the cross, and someone desires to hold His hand — that is what gives value to life, that is what gives value to every life — be it an embryo in a petri dish or grandma in a care center. And nothing else matters!”

Lamb offered encouragement to rally participants by reflecting on David and Goliath.

He reflected when the ruddy shepherd boy David asks, “Who is this uncircumcised Philistine that he should defy the armies of the living God?”

“When you defy life, you defy the Creator, the Redeemer and the Sanctifier,” noted Lamb.

“But it’s not the death of the giant that concerns us today, it’s the giant of death,” Lamb said. “And he is defying us.”

Lamb spoke of the political stone — to vote our convictions. He spoke of the activist stone, the service stone, the education and the witness and prayer stones — all stones to take down the giant.

It wasn’t the stone the defeated Goliath, noted Lamb, for David used Goliath’s own sword for the defeat of the giant.

The Knights of Columbus led march participants to the E. Ross Adair Federal Building where those in attendance heard the heart-wrenching testimonies of those who experienced the harm of abortion and told their stories through the Silent No More Awareness Campaign.

“Today’s crowd (of an estimated 1,700) demonstrates that the citizens of Allen County are committed to defending innocent, human life,” said Humbarger, event organizer. “This march has been annually occurring for 39 years. As long as our country condones abortion, you will find us marching for life. We are taking a stand and sending a message to our government that life is worth protecting.”

Humbarger added, “We will not take a moratorium on social issues as long as innocent babies are dismembered and discarded with surgical waste. All innocent human life has worth and deserves protection. Forty years of legalized abortion is 40 years too long.”