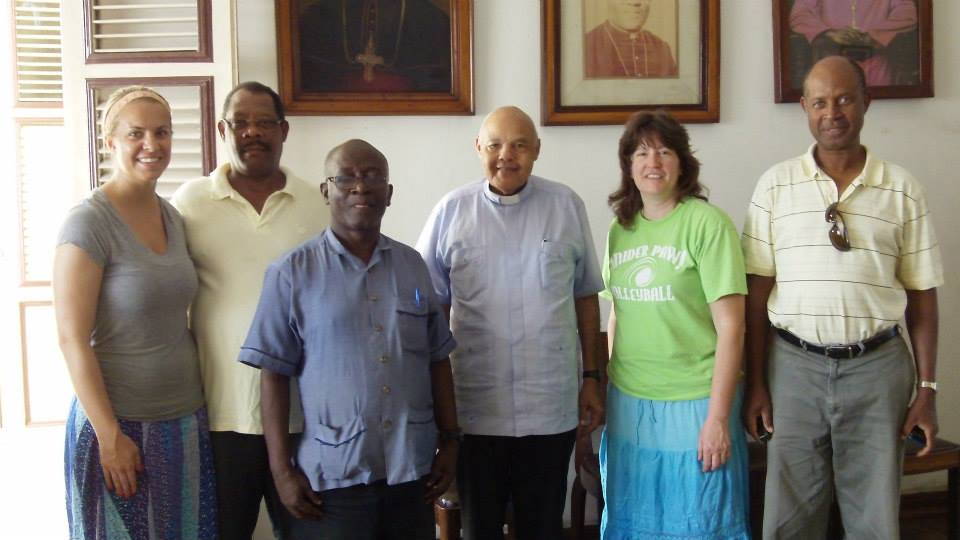 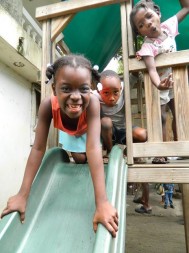 Orphan Dalouse is all smiles at the top of a slide. Her parents died in the 2010 earthquake. Since her grandmother couldn’t feed her, she gave her to an aunt who used Dalouse as a restevek (slave child). When she arrived at the orphanage, Dalouse had been badly beaten and had not eaten in days.

FORT WAYNE — Six University of Saint Francis students and their faculty advisor, Dr. Amy Obringer, along with a few others connected with the university, are back in Fort Wayne following another heartwarming journey to Haiti early last month working for 10 days in their adopted Our Lady of Perpetual Help Orphanage at Robillard, a rural area about a six-hour drive north of Port-au-Prince.

“We feel called to help this orphanage,” said Obringer in an article published in the Dec. 16, 2012, issue of Today’s Catholic following a similar trip to Haiti last year. For the past three years, through its Formula for Life (F4L) fundraiser each spring, USF has been the orphanage’s most consistent and main supporter. Last fall’s F4L campaign exceeded the goal of $50,000. And along with this year’s 5K walk/run, which so far has raised an additional $10,000, more than $60,000 recently was given to Father Andre Sylvestre, the beloved founder of the orphanage, for construction of the first building on the 15-acre site.

Tens of thousands of citizens living in the poor Caribbean country are still suffering from the devastation of Hurricane Katrina in 2005 and the catastrophic earthquake that struck the capital city Port-au-Prince in 2010.

Currently, the orphanage consists of 27 children and three “mama’s — who give love and compassion to the children — all living and eating in a small, rented ranch-style home.

“There’s no room for any more orphans,” Obringer indicated, describing the extremely crowded conditions with 17 girls all living and sleeping in one room with similar conditions for the boys. A preschool teacher instructs the younger children in the garage area while the older children are driven to and from an elementary school about a mile away.

Father Andre’s dream is to house 100 to 150 orphans on the campus in three or four residential units, each housing 40 children and staff. Not only would the units serve as home and family for the children, but the complex eventually would include a vocational school, library, health clinic, chapel, adult literacy center, community room and possibly a center for a congregation of sisters who would manage the orphanage after Father Andre — in his mid-60s — is gone.

The campus also will include an area for gardening and farming with a beginning market area for selling goods and services, a playground and soccer fields,” said Rachael Bornhorst, a USF student who journeyed to Haiti last year.

“Father Andre wants the children to learn a vocation to support themselves when they leave,” she added.

In addition to running the orphanage, the diocesan priest oversees a large parish and a school of 500 children, and has his own counseling practice with some 14 appointments per week. With the diocesan priest in Haiti, Obringer and the students in Fort Wayne and the architect in Muncie, it’s difficult to coordinate details, Obringer indicated. The architect, Tony Costello, is a retired Ball State University professor and a close friend of Father Andre, a graduate of the Muncie school.

“It’s interesting how things fall into place,” she continued. When Obringer and USF student Amanda Pedro first arrived on the first of two flights, they spent some time talking with Father Andre at the new site.

“As we tried to figure out how to hire a construction crew leader, Father Andre recalled that the local diocese employed two engineers, so he called Archbishop Louis Kebreau. Normally, the engineers are in Port-au-Prince but they just happened to be in our area,” she continued. “We got to meet with the archbishop and the engineers, and after they do a structural analysis of the land, we can expect construction to begin in June. It couldn’t have been better! And the archbishop offered the engineers’ expertise for free!

“We staked out that first building,” Obringer said, “indicating where it belongs on those 15 acres. We used some tape measurers and hammered in stakes with stones and rocks while some Haitian men cut through the twigs and overgrowth with machetes, trying to understand us as to where paths needed to be.”

The USF visitors also helped till up a garden where the older students can plant corn, onions, peppers and squash. “Dealing with some mean red ants was the biggest obstacle of that project,” Obringer said.

“Once the crops start growing, the older kids will learn to work with the land and it could possibly turn into a vocation for them,” Bornhorst related. And some of the girls may have the chance to get into nursing since there’s a university nursing school close by, she indicated.

On this her first visit to Haiti, USF student Jessica Heulsman and other students spent a day working with two Haitians molding concrete into cinderblocks. “It’s exhausting, hard work,” she said. Usually, the two men make about 3,500 blocks a week. They will be used to erect a 15-foot-high perimeter wall around the entire 15 acres. 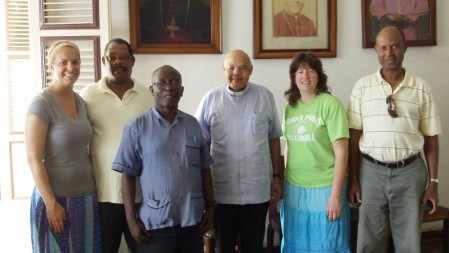 “Our next project is to raise $80,000 for a multipurpose building to house a kitchen, chapel and school,” Obringer said. “Another need is to hire teachers to come in or get them means of transportation to the school.

“Since we’ve got the momentum going we’re going to continue our fundraising efforts all year long by giving talks, being in the news and getting the word out.” Monetary donations are accepted at any time by contacting Obringer at [email protected] or by calling (260) 399-7700, ext. 8210. Readers also can “like” Formula for Life on Facebook.