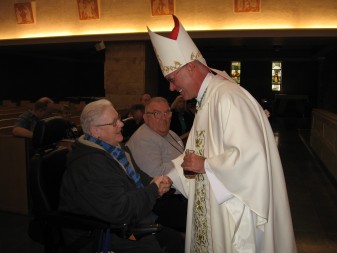 FORT WAYNE —  It was a special day of reflection and fellowship for those in attendance at the Retreat for Persons with Disabilities held at St. John the Baptist Church on Saturday, Oct. 1.

The retreat, in its fifth year, is designed for all levels of ability and offers catechesis, a shared meal and Mass.

This year the retreat was a little different in comparison to those held previously, said Pinkie Louden, St. John parishioner and facilitator of the day. Louden, who is herself confined to a wheelchair, called this year’s retreat for the disabled an “abbreviated retreat.” But even with the relaxed time frame the day was packed with special features.

The retreat began with registration at 9:30 a.m., followed by a special Mass at 10 a.m. celebrated by Bishop Kevin C. Rhoades, in St. John the Baptist Church. His homily focused on the feast of St. Therese.

Although St. Therese lived only 24 years, she was declared one of the great teachers of the Church by Blessed Pope John Paul II. The pope referred to her as an “expert in the science of love.”

Bishop Rhoades referred to St. Therese’s own suffering — the death of her mother when Therese was only four years old; the death of four siblings; the mental illness of her father.

But Bishop Rhoades reminded the 50 people present for the retreat to do as Therese did — offer suffering for others and continue to be witnesses of love, witnesses of hope.

Following the Mass the retreatants, ranging in age from early 20s to 70s, were delighted to move to the St. John Parish activity center where, along with the bishop, they were welcomed to a banquet table laden with luncheon foods. Fruit salads, meat and cheese trays, donations from Pizza Hut and Chick-fil-A, along with donated cookies and various homemade desserts made a satisfying meal to share.

Louden said, as organizer of the retreat, she does not ask for money from the parish and is grateful to all who donate their time, talent and treasure to provide food and service for the day. The 12-member committee that assists Louden with the retreat is mainly comprised of St. John parishioners and volunteer their time and energy each year, along with parents and benefactors, to make the retreat for the disabled a success.

Louden was especially appreciative of the bishop’s presence there this year and said, “He’s so approachable. … He seems to be really interested in people with disabilities. It’s so good for him to interact with the kids.”

The participants, whose disabilities range from physical to intellectual to spiritual, were an attentive audience when Bishop Rhoades spoke with them personally during lunch.

Bob Odell, a member of Most Precious Blood Parish in Fort Wayne, had polio in 1949. He now has post polio syndrome and has been in a wheelchair since 1988.

Christine Lybrook, a member of St. Vincent de Paul Parish, Fort Wayne, was born with cerebral palsy and weighed two pounds at birth. She organized a similar retreat — after which the St. John retreat is modeled — at St. Vincent Parish. Lybrook fell a couple of years ago and is no longer able to walk.

Following the shared meal, Deacon James Fitzpatrick was on hand to offer a reflection on the Blessed Mother, Our Lady of Sorrows. He spoke of the suffering of the Blessed Mother and connected it with personal sufferings, especially those of the disabled.

Deacon Fitzpatrick said, “The Church must minister to all of its members and those with disabilities are not to be excluded. The Blessed Mother is our mother. She is the mother of all of us, not just some of us.” Each retreatant received a medal, meditation pamphlet and holy card from Deacon Fitzpatrick.

Of the retreat he said, “This retreat allows those with challenges to be ministered to in a way that befits their abilities. Just as we minister to the young, old, sick and the healthy, so must the Church do so for these men and women, who also hunger for a deeper knowledge of their faith.”

After discussion of the Blessed Mother there was time for the participants to play Bingo, a favorite activity among the group. Donated prizes included stuffed animals, religious items and gloves.

The Retreat for Persons with Disabilities is not only a day of spiritual reflection and fellowship but also a call to get involved. Louden said, “I’ve been trying to get the disabled more involved in the parish. We hope this gets them up and going. They are so much an important part of the Church — just like everybody else.”