One year shy of 50 years in the priesthood, Father William Sullivan will bid farewell to the active ministry. That’s not to say that he wasn’t honored when the parish council at St. John the Baptist in New Haven, his final priestly assignment, asked him to return next year for his 50th anniversary.

Ordained in 1972, Father Sullivan admitted he was the last remaining member of his graduating class at Mount St. Mary’s Seminary of the West in Cincinnati, Ohio, the others having passed on or left the priesthood. Looking back on nearly 50 years brings to mind the happy memories of the parishioners he has served, most notably “the joy of being with people on their spiritual walk … to have been with them from birth to death.” 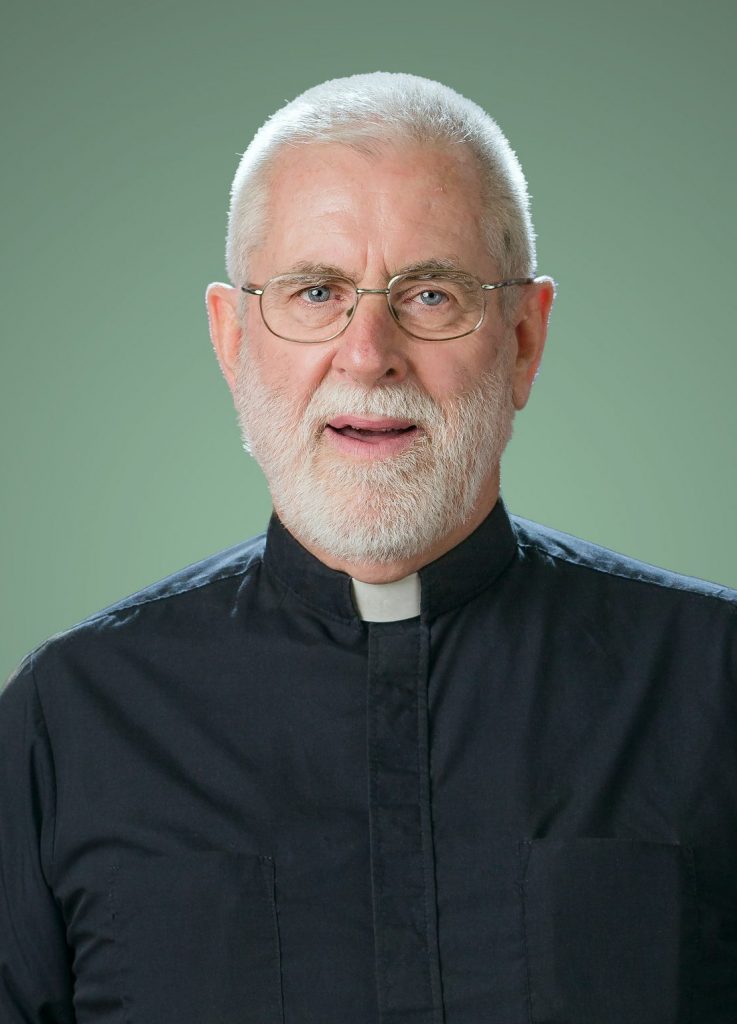 After being ordained by Bishop Leo A. Pursley, Father Sullivan was assigned to St. Jude Parish in Fort Wayne. He then taught at Bishop Dwenger High School for four years, additionally acting as chaplain. He went on to serve at St. Joseph Parish, Fort Wayne, then St. Monica Parish, Mishawaka, St. Thomas the Apostle Parish, Elkhart, and finally St. John the Baptist Parish, New Haven.

He joked that because he is a graduate of Bishop Luers High School in Fort Wayne, his family disowned him during his four years at crosstown rival Bishop Dwenger. He also joked that he was known as the gym-building priest within the diocese for a time, having supervised the building of the gymnasiums at St. Joseph and St. Monica. Fortunately, St. Thomas had just completed their gym when he arrived, breaking the trend.

Born in Massachusetts and raised in Maine, Father Sullivan has a healthy dose of the Irish on both sides of his family. His father chose to move to the Midwest to give his five children, of which Father Sullivan was the oldest, a proper Catholic education.

Father Sullivan remembered the dedicated faith life in his household during his formative years. “My dad went to church almost every morning, and I can still see my mom sitting in her chair saying her rosary.”

He began his Catholic education at St. John the Baptist in Fort Wayne and became part of the third graduating class of Bishop Luers. He was inspired by the deep spiritual life of the Franciscan priests who taught there at that time.

“I told my mother one day — I think I was a junior — ‘I’m thinking of becoming a religious brother.’” Her response was, “‘Why be half a priest?’”

Though he had considered joining the Franciscan order, he was accepted by the Diocese of Fort Wayne-South Bend instead. On the day of his ordination, he remembers receiving a phone call from a man wanting to speak with “Deacon Sullivan.” It was one of his classmates who was ordained earlier that day in Florida, calling to jab at him that he had been ordained a priest first.

The Franciscans might have lost him to the diocese, but one of his former teachers at Bishop Luers, Father Florentine, gave the homily at Father Sullivan’s first Mass.

He considers himself blessed to have worked with and been mentored by Father (later Monsignor) Edward Hession and Msgr. William Lester.

“People would call them probably two of the giants of the diocese, and I was fortunate enough to be there with them. You go to their funerals and the places are packed, so you know they made an impact.”

He hopes his own contributions have left an impression on the people to whom he has ministered. “I still hear from some people in the parishes. I think as the years go on, those kind of slow down a bit,” he admitted, though he recently received a card from a former parishioner, thanking him for the impact he had made on their family. “That gives you a little zip.”

Another joy has been the young seminarians and priests who have been assigned to his parish through the years. “I hope they learned something; I learned a lot from them, too.”

For the first 15 years of his priesthood Father Sullivan was also the Catholic Youth Organization moderator and handed out trophies in every sport in 15 years. “That was a joy,” he said.

Hospital ministry was paramount in his vocation. When his mother was hospitalized with an injury and her parish priest only visited her once, he vowed to make care of the sick a priority.

While at St. Jude, he ministered at Parkview Hospital across the street. He is planning to resume visits to homebound parishioners again soon.

Of his priestly life, he shared, “I’ve been with people from womb to tomb and hopefully been a source of strength for some of them. You know you’ve made some people happy; you’ve clashed with a few people. I honestly think I’ve been trying to do my best, so that’s kind of where I am right now.”

Father Sullivan’s retirement plans include travel and simply being available to those who might need his aid in little ways, along with attending diocesan functions such as ordinations and meetings. When Deacon Michael Ammer, a son of St. John the Baptist Parish, asked Father Sullivan to vest him at ordination, “I was very moved by that. I said I’d be honored.”

Forty-nine years is a long time to learn, too, and Father Sullivan shared some the advice he has acquired over the years with the young men stepping up to fill his shoes. “Be a man of prayer. … If you don’t have that source, you’re empty. There has to be that connection.”