In a lifetime of accomplishments, keeping a promise to her parents has been the most gratifying for Dr. Carolyn Yauyan Woo, retired president and CEO of Catholic Relief Services. She will be the guest speaker at the 2020 Servus Omnium lecture presented by the University of Saint Francis on Tuesday, Feb. 25 in the USF Robert Goldstine Performing Arts Center, 431 W. Berry Street. 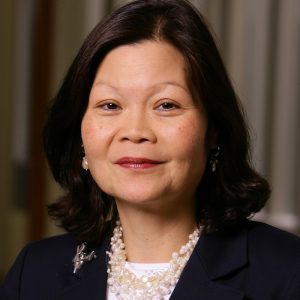 Woo, who has made her mark in higher education and as president and CEO of Catholic Relief Services, grew up in Hong Kong. Her parents fled there from China to escape World War II and the Communist regime. The fifth of six children, she was the youngest of four daughters. Her father expected her two brothers to become a doctor and a lawyer.

Despite being well educated, her father had no plans to educate his daughters. “I grew up in a time when girls were not valued,” Woo said. Her mother received her schooling from a tutor, and Woo and her sisters went to a school operated by Maryknoll sisters of Ossining, New York.

“They gave us a strong academic background and helped us understand our own voice, and they lived their faith with boldness and joy. Their attitude was always ‘we can handle this, because God is with us.’”

Those early lessons in living faith boldly have served Woo and have helped her serve others.

Her early education gave her a hunger to keep learning. When her 12 years with the Maryknoll sisters came to an end, she was determined to go on to college — something none of her sisters had done.

“My sister worked for TWA in the office, so on Saturdays I went there to help her. I was her human collator,” she chuckled, pointing out that in those days there weren’t machines to copy and collate printed materials.

Helping her sister in the Hong Kong TWA office gave her an opportunity to meet a professor from Purdue University.

“I had never heard of Purdue and had no idea where Indiana was in the United States,” she said. But when he assured her that at Purdue she could study anything she wanted, Woo set her sights on West Lafayette.

There was no money for her to continue her education, so she fund-raised. Woo said that although her family was not wealthy, the children had a nanny who scrupulously saved her meager pay and invested in gold when she could, and with the help of her older siblings and the nanny Woo was able to raise enough money for one year of tuition.

“My father was totally against my leaving,” she said.  He wanted his youngest daughter to remain in Hong Kong to provide companionship and to help support the family.

“They were Chinese. They did not have Social Security. They had children,” Woo said. But she promised him that she would always provide what she could to the family.

Arriving on campus, Woo realized she had limited time and resources to spend on her education. Anxious to learn as much as she could, she took 42 credit hours that first year.

She became very homesick. “So, I went to daily Mass at the Newman Center.”

St. Thomas Aquinas Catholic Center at Purdue became her home. “They fed me,” she said, spiritually as well as physically and emotionally. “Any goodies that people brought in… cookies, cakes, pies, they shared with me. I studied there all day.”

She also met her future husband there. “He was a graduate student and I was a freshman. God was looking out for me.”

And God continued to take care of her.

The day she was to learn if she had received the scholarship, she got out of class at 11:20 a.m. If she went to 11:30 a.m. Mass, she realized, she wouldn’t be able to find out about her scholarship until after 1 p.m. because the office closed for lunch at noon.

“My chances of getting that scholarship were very tiny. I decided that since I was probably going to get bad news, I should just delay it until 1 p.m. and go to Mass. After Mass I stayed in the chapel and had a long talk with God. I just told him that I thought it was not fair that it was so much harder for girls to get an education. Then God surprised me.”

Woo not only got the scholarship for a second year but continued to earn full scholarships that made it possible to pursue her doctoral studies at Purdue.

“I was a student at Purdue for seven years — from freshman year through my PhD.”

But that wasn’t the end of her association with Purdue University. After marrying and spending two years in business, Woo returned to the school and eventually rose to be associate executive vice president for academic affairs.

When the University of Notre Dame tapped her to lead the Mendoza College of Business, she made the difficult decision to leave the safety of Purdue and start a new venture. “It was a very hard decision. I had my community at Purdue.”

But move she did, and during her 14 years at Notre Dame, Mendoza became the top business school in the country.

Along the way, Woo said her conviction that faith is critical to strong business increased.

When an opportunity to serve Catholic Relief Services as president and CEO arose, she again made a difficult decision to leave a life she loved — including her husband and sons. “I said I would serve for five years, and I knew I would be traveling a lot.”

She moved to Baltimore and lived “very simply” in a one-bedroom apartment while learning the intricacies of international fundraising. “CRS was very good at crisis fundraising, but they needed more than that to sustain their work.”

Woo admitted that she “knew the least of anyone who worked there” about what CRS staff members worldwide face daily. But she learned, and aided in growing the organization into a healthy service agency.

During all of this, Woo also launched the Principles for Responsible Management Education for the United Nations Global Compact and formulated the first two Vatican Impact Investing Conferences, in 2014 and 2016. She also coordinated the dialogue on the environment between energy and investment company CEOs at the Vatican in 2018. Even so, Woo’s proudest moments have been humble ones.

“I promised my father I would take care of my family and I did!”

And, she said, throughout her career she was able to give up what was safe do the work “that I was called to do.”

Woo will speak on “Business as a Force for Good” at the breakfast event, beginning at 7 a.m. Tickets are $10 in advance and $15 at the door, with tables available for $80 in advance. Bishop Kevin C. Rhoades will offer a blessing and opening prayer.