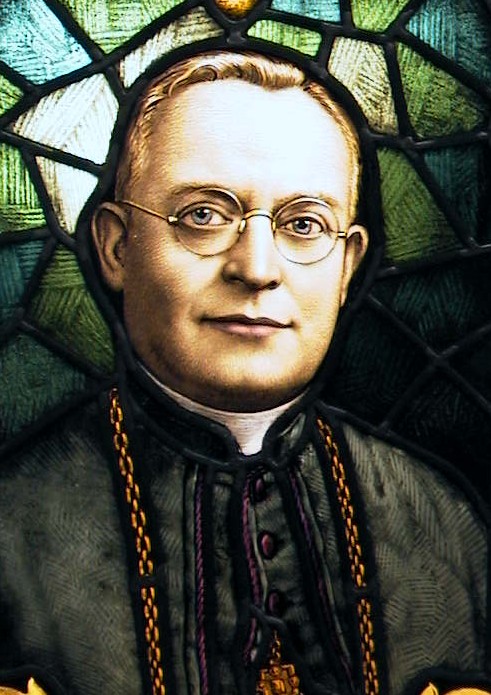 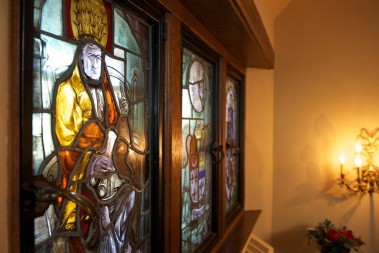 The home still contains stained-glass images of saints, Bishop Noll’s coat of arms and his sister, Sisters of Providence Sister Rose Beatrice. Five stained-glass windows with images of former bishops of the diocese were removed a few years ago and are displayed in the Cathedral Museum in the Archbishop Noll Catholic Center downtown.

FORT WAYNE — Four months after Bishop Leo A. Pursley was installed in February of 1957 as the sixth bishop of Fort Wayne, he began living in a 13-room, fashionable brick and stone Tudor home built in 1927 on amble property at 4101 Taylor Rd. Perhaps its great mix of trees, grassy areas and rolling topography was the reason he named the property “Maryoaks.”

At the time of Bishop Pursley’s installation, the diocese observed its 100th anniversary. Three years later the local diocese was renamed the Diocese of Fort Wayne-South Bend after four northwestern counties of Indiana were removed from the diocese to form the Diocese of Gary.

When Bishop William E. McManus was installed in October 1976 as bishop of Fort Wayne-South Bend, he thought the mansion too large for his needs. In addition, the home needed many costly repairs. He moved to a modest ranch-style home in the Woodhurst subdivision, donated to the diocese, now occupied by Bishop John M. D’Arcy, bishop emeritus.

Since that time Bishop Pursley’s Tudor Revival has been remodeled extensively and now consists of 5,518 square feet of living space above ground with another 2,878 square feet below ground, of which 1,250 square feet are finished. There are six bedrooms — one of which is the master suite with a sitting-dressing room — five full baths and two half-baths.

In addition to spacious living and dining rooms, the residence includes a kitchen and breakfast room, two foyers, a solarium, butler’s pantry, a formal office/library, several sitting areas, a den, both game and billiard rooms, a wet bar, wine closet, walk-in safe, three staircases, five fireplaces and two, two-car garages, one attached. The architectural details have been preserved, placing this magnificent mansion on the National Register of Historic Places. The home recently was on the market with a listing price of about $1 million.

Even though the mansion has grown to be a bit too ostentatious for a bishop’s residence, three religious stained-glass windows remain in the home from the time Bishop Pursley lived there. And they blend beautifully with the many leaded-glass windows seen throughout the two-story abode. One window appears to contain an image of Bishop Pursley, while another depicts his coat of arms.

This incredible mansion sits high on 9.218 acres with a recently added pool, pergola and bathhouse. A small, private path from the landscaped backyard leads to Towpath Trail, connecting the property to the Fort Wayne/Aboite Trail systems. Also, Noll Park is close by, offering more than nine acres of wooded grounds and undeveloped area near the home.

Incidentally, Noll Park is named after Archbishop John F. Noll, the fifth bishop of Fort Wayne, who along with his predecessor, Bishop Herman J. Alerding, established residency in the general area from 1925 to 1956 at 1415 W. Washington Blvd. in the West Central Neighborhood. The renovated 104-year-old home is known locally as “the bishop’s house” and it, too, contains remnants of the ordinaries that lived there. The Noll Mansion, as it’s also called, still houses stained-glass images of saints, Bishop Noll’s coat of arms and his sister, Sisters of Providence Sister Rose Beatrice.

Five stained-glass windows with images of former bishops of the diocese were removed a few years ago and are displayed in the Cathedral Museum in the Archbishop Noll Catholic Center downtown. In addition, there are Italian murals depicting the Stations of the Cross and silk embroidery of the Madonna and Child over the entry door. Finally, there is an ornate chapel on the second floor with a cross on the roof.