The following is a response from Bishop Kevin C. Rhoades to remarks made by Pope Francis in the movie, “Francesco,” which have been widely discussed. 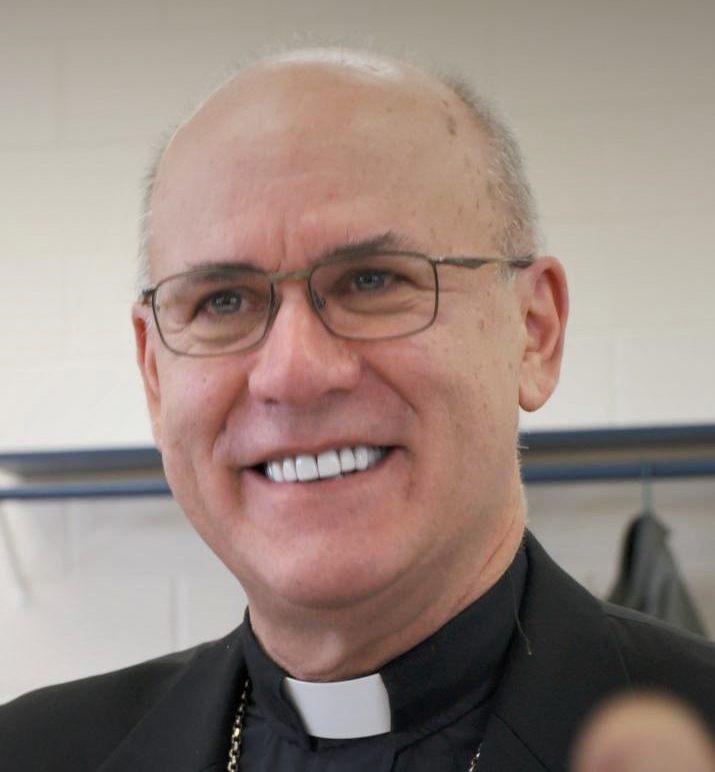 FORT WAYNE — A quote about civil unions from Pope Francis included in a brief passage in a new documentary about his pontificate entitled “Francesco” made headlines around the world last week. The Holy Father’s words were mostly applauded by those who support same-sex marriage and criticized by those who oppose same-sex marriage. Many were just confused by the pope’s words in the documentary. Since the Vatican has not yet issued a clarification, I have decided to offer my own interpretation because many of the faithful of our diocese have asked me for an explanation. Perhaps later, or even before this article goes to print, the Holy See will offer a clarification.

These are the words of Pope Francis quoted in the documentary: “Homosexual people have a right to be part of a family. They’re children of God and have a right to a family. Nobody should be thrown out or be made miserable because of it. What we have to create is a civil union law. That way they are legally covered.” 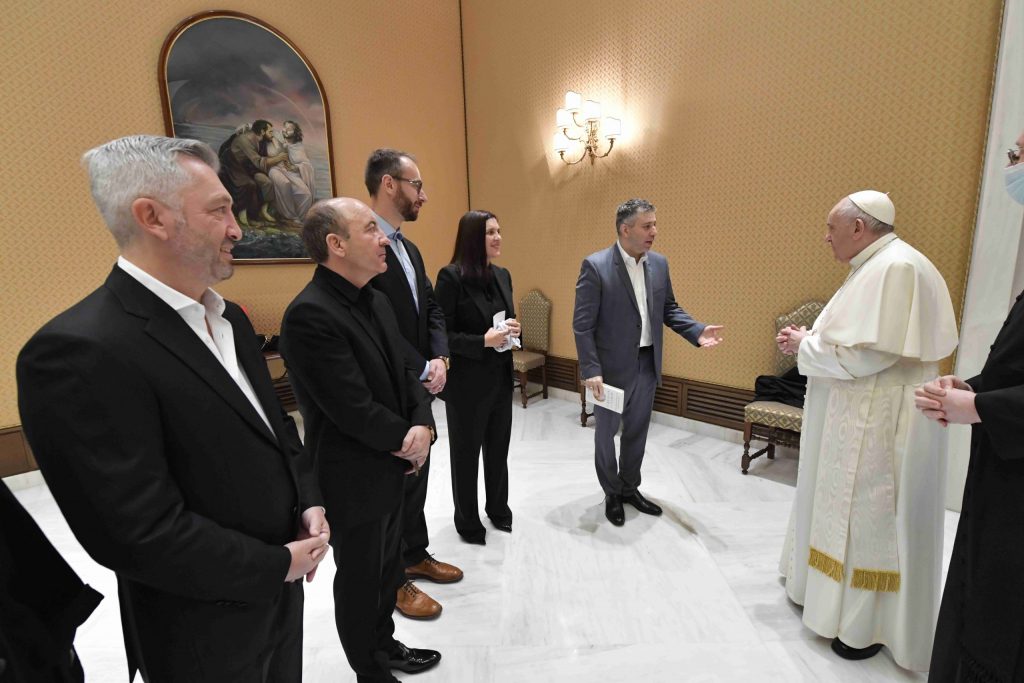 Pope Francis greets filmmaker Evgeny Afineevsky and others involved with the production of the documentary, “Francesco,” before the papal general audience at the Vatican Oct. 21, 2020. (CNS photo/Vatican Media)

Pope Francis said these words in 2019 during an interview with a Mexican television network. I have learned that the documentary joined together answers of the pope to two different questions in the original interview, which partly explains the confusion. The first question had to do with the integration into the Church of people living in irregular situations. The Holy Father answered by mentioning how homosexual persons should never be rejected or excluded by their own families. That is what Pope Francis was referring to in the first three sentences quoted in the documentary about homosexual persons “having a right to be part of a family, etc.” Basically, they should not be rejected or excluded by their own family or by the Church. Of course, this reflects the teaching of the Church. The Catechism states that persons with same-sex attraction “must be accepted with respect, compassion and sensitivity.” They should always be loved unconditionally.

The last two sentences in the above quote were the pope’s answer to another question in the Mexican television interview, a question about same-sex marriage. The Holy Father responded that “it is an incongruity to speak of homosexual marriage,” and then said, in the snippet shown in the documentary: “What we have to create is a civil union law. That way they are legally covered.”

It is important to note that Pope Francis has always opposed same-sex marriage. As archbishop of Buenos Aires, he spoke strongly against a proposal to legalize same-sex marriage in Argentina. He spoke of same-sex marriage as an “anti-value and an anthropological regression.” As pope, he has many times spoken of marriage as the union of man and woman. In his apostolic exhortation, Amoris Laetitiae, he wrote: “There are absolutely no grounds for considering homosexual unions to be in any way similar or even remotely analogous to God’s plan for marriage and family.” 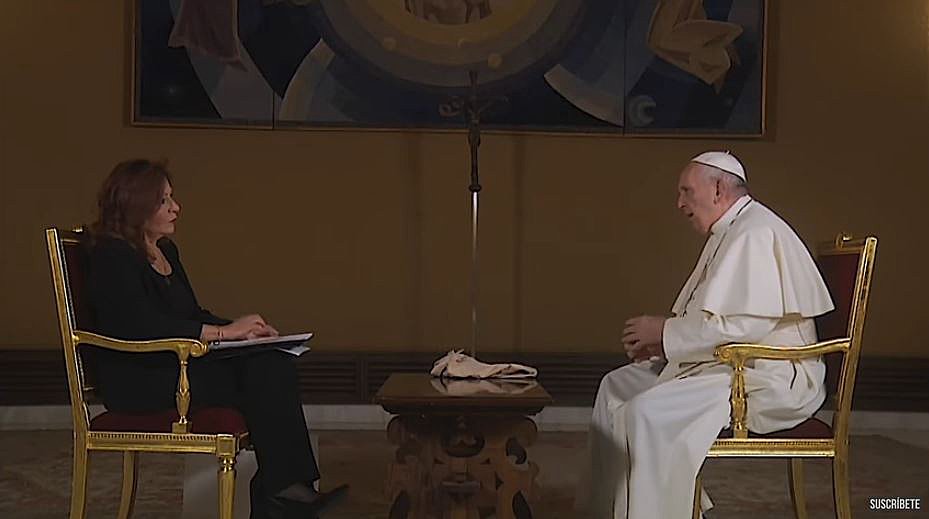 Pope Francis speaks with Valentina Alazraki of the Mexican television station Televisa during an interview that aired in May 2019. A clip, apparently cut from the interview and shows Pope Francis talking about civil unions, is used in the documentary “Francesco” by Evgeny Afineevsky. (CNS screenshot/Noticieros Televisa via YouTube)

But what about civil unions for homosexual couples? When he spoke out against same-sex marriage in Argentina, Pope Francis did not speak out against civil unions for same-sex couples. As pope, he said the following in a newspaper interview in 2014: “Marriage is between a man and a woman. Secular states want to justify civil unions to regulate different situations of cohabitation, pushed by the demand to regulate economic aspects between persons, such as ensuring health care. It is about pacts of cohabitating of various natures, of which I wouldn’t know how to list the different ways. One needs to see the different cases and evaluate them in their variety.”

It seems that Pope Francis is open to some kind of civil union or civil “living together” (the word he used in Spanish is “convivencia,” not “union”) for cohabitating adults. Perhaps he has in mind something different from the homosexual civil unions criticized in the 2003 document from the Vatican Congregation for the Doctrine of the Faith. Perhaps Pope Francis is in favor of a civil arrangement that gives certain benefits to two people who live together and share domestic responsibilities. This would not be based on a presumed sexual relationship nor be giving legal recognition to homosexual unions per se. It would just be giving some civil protections and benefits (e.g. hospital visitation rights, health care insurance benefits, social security survivor benefits) to two adults living together and dependent on each other. This could include two elderly siblings or two friends living together. It would not be the recognition of such a relationship as equivalent to marriage. In fact, Pope Francis wrote in Amoris Laetitia that “de facto or same-sex unions may not simply be equated with marriage.”

I am still hoping that we receive a clarification from Pope Francis or from the Vatican regarding the quote in the Italian documentary “Francesco” about civil unions. Everyone should be clear that there has been no change in Church teaching about marriage or about homosexuality. The teaching of the Catechism has not been changed and the directives of the 2003 Instruction from the Congregation for the Doctrine of the Faith remain in effect. Besides, the Holy Father does not exercise his official teaching office or change Church directives through television interviews.