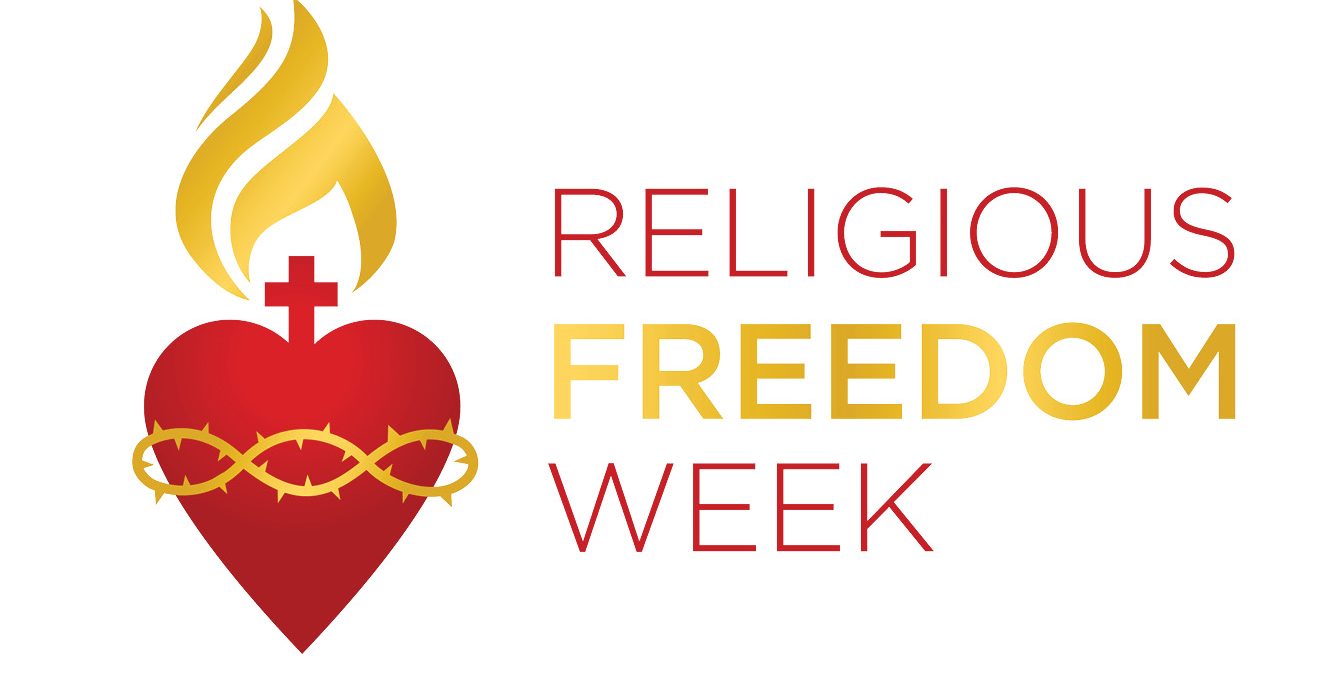 WASHINGTON — Religious Freedom Week, “For the Good of All,” takes place from June 22, the Memorial of Sts. Thomas More and John Fisher, through June 29, the Solemnity of Sts. Peter and Paul. Join Catholics across the country to pray and act for the freedom to serve faithfully and with integrity.

Pray that governments would respect the consciences of the Little Sisters of the Poor and all Christians who care for the sick and vulnerable.

For centuries the Church has carried on the healing ministry of Christ by building institutions dedicated to medicine and accompaniment of the dying. Indeed, the Church invented the hospital as it is known today.

Orders like the Little Sisters of the Poor serve elderly, low-income Americans of all backgrounds. But the Little Sisters’ work is at risk because of lawsuits brought by the states of California and Pennsylvania against the expanded religious and moral exemption to the HHS mandate, and Catholic hospitals are constantly defending themselves against lawsuits and government orders that try to force them to participate in harmful procedures, such as sterilization, gender reassignment surgery and even abortion. It is unthinkable that the Catholic Church would undermine its mission to heal by destroying innocent life and harming the persons for whom it is are called to care.

June 23:  Respect for houses of worship

Pray that people of all faiths would be free to worship without fear of attacks and harassment.
Houses of worship provide spaces for people to step back, often with fellow believers and pray. The rise in attacks on these places is an attack on religious freedom. Gunmen in churches, synagogues and mosques terrorize faith communities. In Europe and North America, churches have been desecrated. Priests all over the world have been killed, even while celebrating liturgies. The problem is not limited to attacks on Christians. Over 50 people were murdered in two mosques in New Zealand, while there have been several attacks on synagogues here in the U.S. in recent years. Mosques and synagogues have been vandalized, while there has been a rise in attacks on Jews and Muslims who are simply going about their daily life. These kinds of attacks are assaults on the image of God.

First, take time during this week to pray a decade of the rosary, fast from a meal or spend time before the Lord in the Blessed Sacrament, offering up the act as a sacrifice in reparation for sins against human dignity. Then support increased funding for the FEMA Nonprofit Security Grant Program, which provides grants to nonprofits, including houses of worship, to improve security. While Catholics should hope, pray and work for a country where people can worship without fear, they can also take practical steps to protect churches, mosques and synagogues, including by contacting their legislators.

Pray for the freedom of the Church in China, and that the rights of all religious minorities would be respected.

Under the Chinese Communist Party, Chinese citizens have limited religious freedom. Since 2013, religious persecution has intensified under a government campaign for the “sinicization” of religion — an effort to have religions conform to government-sanctioned interpretations of Chinese culture. Muslims have suffered grievous human rights abuses too: Since 2017, 800,000 to possibly 2 million ethnic Uighur, Kazakh, Kyrgyz and Hui Muslims have been arbitrarily detained in mass internment camps. Other religions are impacted by the government’s “sinicization” campaign including the estimated 12 million Catholics in China. While the Vatican has reached a provisional agreement with China on the issue of episcopal appointments, reports of persecution by the Chinese government persist as underground churches are closed and their priests detained, crosses destroyed, Bibles confiscated and children under 18 forbidden from attending Mass and receiving religious instruction.

Solidarity with people of faith in other countries begins with learning about their struggles. Stay informed by signing up for the USCCB’s religious liberty newsletter, First Freedom News.

Pray that children waiting to be placed in a loving home and the caregivers who selflessly serve them will find strength and support from the Church.

Caring for ‘the orphan’ is a demand of the Gospel. Over the centuries, the Church has put this work of charity into practice by building adoption and foster care institutions. Today the opioid crisis has put a strain on the foster care system. Yet while more children are waiting to be placed in families, faith-based child welfare providers are being targeted for closures because of their religious convictions. In places like Illinois, Massachusetts, California and D.C., the service providers who have a track record of excellence in recruiting and assisting foster families have already been shut down. In Michigan, sexual orientation/gender identity activists have gone out of their way to challenge Catholic Charities, and Philadelphia Catholic Social Services is taking the struggle to continue to foster children to the Supreme Court. Worse still, in recent years, states that have worked to protect faith-based adoption and foster care have found themselves targeted by powerful corporations looking to appeal to SOGI activists.

Pray that the freedom of the local churches on the U.S. southern border will be respected.
Efforts to construct a barrier on the southern border have met resistance from the Catholic Church in Brownsville. The proposed barrier would run through land owned by the diocese, so the federal government would have to take the land in order to build the wall or fence. Freedom of the Church means that the Church cannot be impeded by the civil authorities from engaging in her mission. That mission includes ministry to those fleeing violence and poverty. As Bishop Daniel Flores of Brownsville told the Wall Street Journal, “I don’t want to use church property to say that no matter how dire your life is, you cannot be received here. …The government is going to have to take the land. The church is not going to give it them.”

Support the freedom of the Church. The Religious Freedom Restoration Act has provided persons of all faiths with protection against government intrusion.  Promote the freedom of religion today by encouraging legislators to protect all people of faith and do no harm to RFRA.

Pray that Catholic schools in the U.S. would be free to teach the truth about God and His creation.
Education is central to the Church’s mission. In fact, one of the spiritual works of mercy is to teach. In the U.S., the Catholic school system grew out of necessity, due to the wave of 19th century Catholic immigrants who felt unwelcome in the public school system. Since then, Catholic schools have been significant anchor institutions in many neighborhoods, benefitting even those who are not their students. Catholic leaders have played a leading role in ensuring that all children have access to quality education. Education is what Catholics do, and an America without Catholic schools is unimaginable. Catholic schools need the space to operate in accordance with Catholic convictions if they are to continue to be a source of vitality for society.

Pray that God would show the people of the Central African Republic the way to peace and reconciliation.
The Central African Republic is one of the poorest countries in the world. A total of 2.9 million people, out of a population of 4.9 million, depend on humanitarian assistance. In 2012 a coalition of rebel groups, called the Seleka, from the predominantly Muslim North launched a rebellion that deposed the president. To counter the Seleka armed groups, nonMuslim rural communities strengthened traditional self-defense militias, called anti-balaka. Even though the conflict started primarily over political power and access to natural resources, the Seleka and anti-balaka forces resorted to banditry and attacks on unarmed Muslim and Christian civilians, making religious identity a driving force. During this civil war, Evangelical Pastor Nicolas Guerekoyame, Catholic Archbishop Dieudonné Nzapalainga and Imam Omar Kobine Layama led an interreligious movement to counter rising hatred with reconciliation, and violence with peace.

The USCCB and Catholic Relief Services labored alongside the religious leaders in the CAR and together helped launch the Central African Interfaith Peacebuilding Partnership. The Partnership supports trauma healing, peacebuilding practices and other programs to help young people to learn skills, access small scale loans and start farms and businesses. The Church also provides humanitarian aid to the thousands of wounded and displaced victims.

Consider participating in this work by donating to CRS.

Pray that God would give the grace to remember the dignity of all and invite others to do the same.
The strong Catholic tradition of social teaching compels believers to be actively engaged in the building up of their communities. This is achieved by being involved in the political process — and yet today, many shy away from such involvement because national and local conversations are filled with vitriol and harsh language, often directed at people themselves. This kind of attack, no matter the reason, only serves to further divide communities. What is needed is good, honest, civil dialogue.

Interested in learning more about civil dialogue or about how your community can engage in civil dialogue more often? Join USCCB’s Civilize It Campaign to help promote dignity beyond the debate. Visit civilizeit.org for more information, to take the pledge or plan an opportunity for local civil dialog.

Information provided by the U.S. Conference of Catholic Bishops