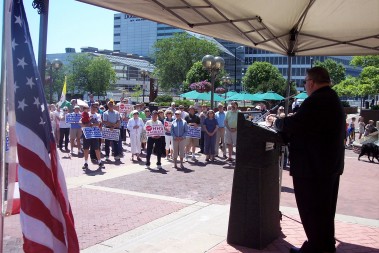 SOUTH BEND — The Stand up for Religious Freedom Rally at noon on June 8 drew a large crowd to the Jon R. Hunt Plaza downtown. People of all ages — senior citizens, workers on their lunch hours and young families — stood in the sunny plaza to show their opposition to the federal Health and Human Services (HHS) mandate requiring employers to provide insurance coverage for immoral health services.

Before offering the opening prayer at the rally, Msgr. Michael Heintz, rector of St. Matthew Cathedral, read a letter from Bishop Kevin C. Rhoades of the Diocese of Fort Wayne-South Bend, explaining the importance of defending religious freedom and thanking all those who are praying and standing up for this freedom. On May 21, the diocese joined 42 other Catholic entities and dioceses in filing a federal lawsuit in defense of religious liberty.

The main speaker at the rally was Gerard Bradley, a University of Notre Dame law professor who specializes in constitutional law and law and religion. Bradley told the crowd that Cardinal Timothy Dolan of New York was right when he said the HHS mandate was an “unprecedented intrusion on religious liberty.” He said that the difference between the Obama administration and those who oppose the HHS mandate is not a simple misunderstanding, but rather are a “fundamental disagreement about the meaning and the scope and the importance of religious liberty in our country.”

Bradley continued: “Religious liberty is about whether we are going to live in a country where the culture, the law, the public institutions, are set up in a way that we can be people of faith, especially whether our children and grandchildren will have an opportunity to be people of faith.”

While the HHS mandate alludes to “contraception,” Bradley warned that abortion, especially chemical abortion, could be added as a covered service under the mandate. He said that contraception is only part of a wider agenda that includes abortion, sexual freedom and same-sex “marriage,” all issues that will clash with religious liberty in the coming years. 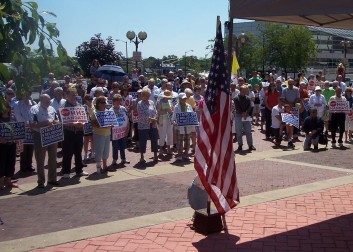 A large crowd of citizens gathered in South Bend’s downtown to express their support for religious freedom and to hear speakers at the June 8 Religious Freedom Rally.

He noted that since 1789 (when the U.S. Constitution went into effect) the view was that religious liberty benefits the country because religious people tend to be virtuous, and virtuous people tend to sacrifice for the good of the community and realize that they are part of one nation “under God.” Thus the attitude of government was to do all it could to let religion flourish.

However, he continued, the view now, manifested by the HHS mandate, is not to ask “How can the government help religious institutions … do what they do even better?” Rather, the view now is “Get in the way of our agenda, you are road kill,” Bradley said, warning that the country is at a turning point regarding religious liberty.

South Bend was one of 140 U.S. cities where Religious Freedom rallies took place on June 8. Thomas Uebbing is the South Bend rally captain.