WASHINGTON (CNS) — As people throughout the U.S. self-isolate and retreat from daily life amid the COVID-19 pandemic, priests and women religious have become beacons of hope globally as they mobilize in unconventional ways.

From church parking lots to hospitals, the digital space and even from the sky, Catholic religious are making their presence known to an anxious global populace.

“Jesus Christ created a community during his time on earth and it is the priests, the religious women and men, who are called in a special way to give of themselves to their community,” said Father Mark M. Morozowich, dean of theology and religious studies at The Catholic University of America in Washington and a priest of the Ukrainian Catholic Eparchy of St. Josaphat in Parma, Ohio.

“In times like today, when we have this deadly pandemic that threatens the world, we are called as Christians to engage in ways we hadn’t considered before, but we’re still called to engage,” he said.

This call is what inspired Father Anthony J. Manuppella, pastor of St. Gianna Beretta Molla Parish in Northfield, New Jersey, to board a small plane at the Atlantic City International Airport March 15 with a monstrance holding the Blessed Sacrament and a statue of the Blessed Mother and fly the perimeter of the Diocese of Camden, New Jersey, blessing the people below who are facing the pandemic. 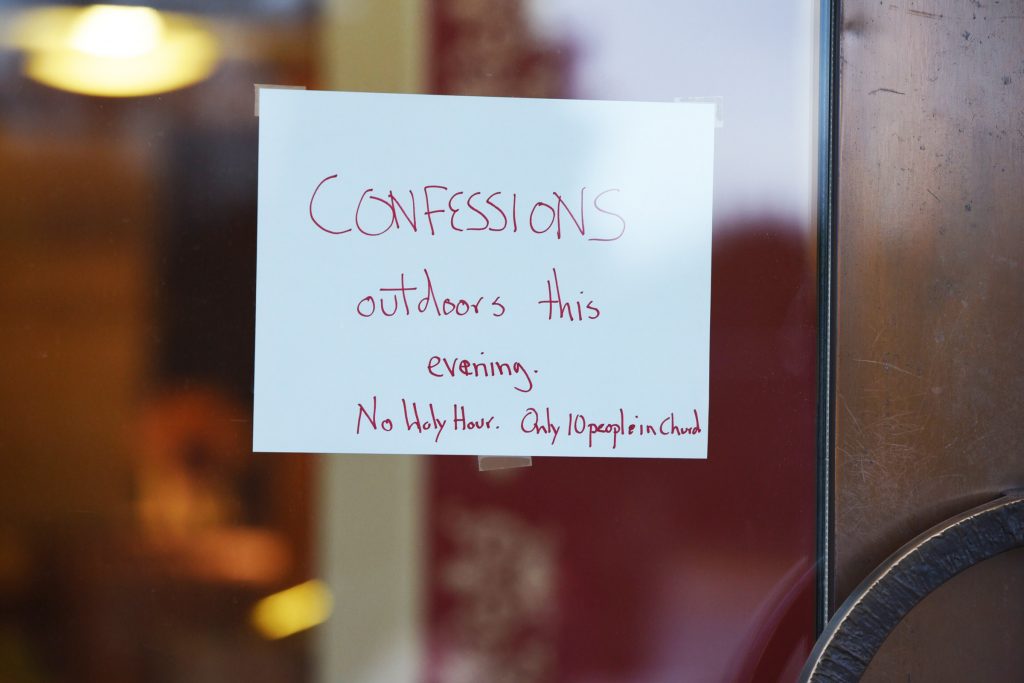 A sign on the door of St. Leo the Great Church in Fairfax, Va., March 18, 2020, lets parishioners know of changes amid the coronavirus pandemic, including confessions being offered outdoors. Catholic leaders say Lent during a pandemic can offer the faithful extra time to pray and reflect during the season leading to Easter. (CNS photo/Zoey Maraist, Arlington Herald)

Father Manuppella was following the example of past papal processions of the Blessed Sacrament during plagues that ravaged world populations in past centuries.

“So, in that same tradition, instead of walking in procession with Jesus, we’re going to fly with him around the perimeters of the whole diocese,” Father Manuppella said shortly before boarding his flight. “So that way we can pray that Jesus will bless, heal and we pray that this coronavirus will be contained, will be stopped.”

Historically people have turned to religion in times of adversity, but that’s been made difficult when churches around the world are suspending public Mass, eliminating the physical presence of faith communities.

“It’s important that we’re safe during these times and to observe social distancing to limit the spread of this virus,” Father Morozowich said. “It’s why priests and women religious are becoming creative in how they bring the presence of Jesus Christ to people, while observing that safe distancing.”

Catholics in Manitowoc, Wisconsin, had an opportunity to participate in adoration of the Blessed Sacrament and the sacrament of reconciliation March 22, in a way that followed Green Bay Bishop David L. Ricken’s March 20 directive that there be no public gatherings of 10 or more people, in compliance with federal and state recommendations.

Adoration was held in front of a second-floor window of the school at St. Francis of Assisi Parish, which faces the parking lot, allowing Catholics to witness it without ever leaving their cars and with a safe distance to prevent the spread of coronavirus.

Father Jose Lopez and Father Bill Evans, parochial vicars at the parish, also heard confessions from inside its Life Teen building. From separate rooms that included screened windows, they were able to create makeshift confessionals where people could drive up or walk up to one of two windows: one covered with paper for private confession and the other not covered.

Jacque Welsh, a member of St. Mary Parish in Greenville, Wisconsin, drove one hour to attend the adoration.

“This is one of the few places that I could actually find that still has adoration,” Welsh said. “It means everything. Doing it online and the webcams and everything is good, but with us not being able to take the Eucharist, even this much, it’s just everything.”

The digital space has offered Catholic leaders a venue to reach millions of isolated Catholics worldwide.

Archbishop Alexander K. Sample of Portland, Oregon, led a 1 p.m. rosary March 19 on Facebook Live, just as Pope Francis and Catholics around the world were praying the same prayer amid the coronavirus crisis, according to a report in the Catholic Sentinel, newspaper of the Archdiocese of Portland.

After the 20-minute rosary with the luminous mysteries held in the chapel at the Archdiocese of Portland Pastoral Center, the archbishop turned to the camera and made an appeal for Catholics in western Oregon to pray the rosary daily. He said the prayer would offer “powerful assistance” to the region and the world.

“We put ourselves in the hands of the Blessed Mother,” he said, and then prayed for the sick and dying, world leaders, health workers and first responders “who are seeking to keep us safe.” 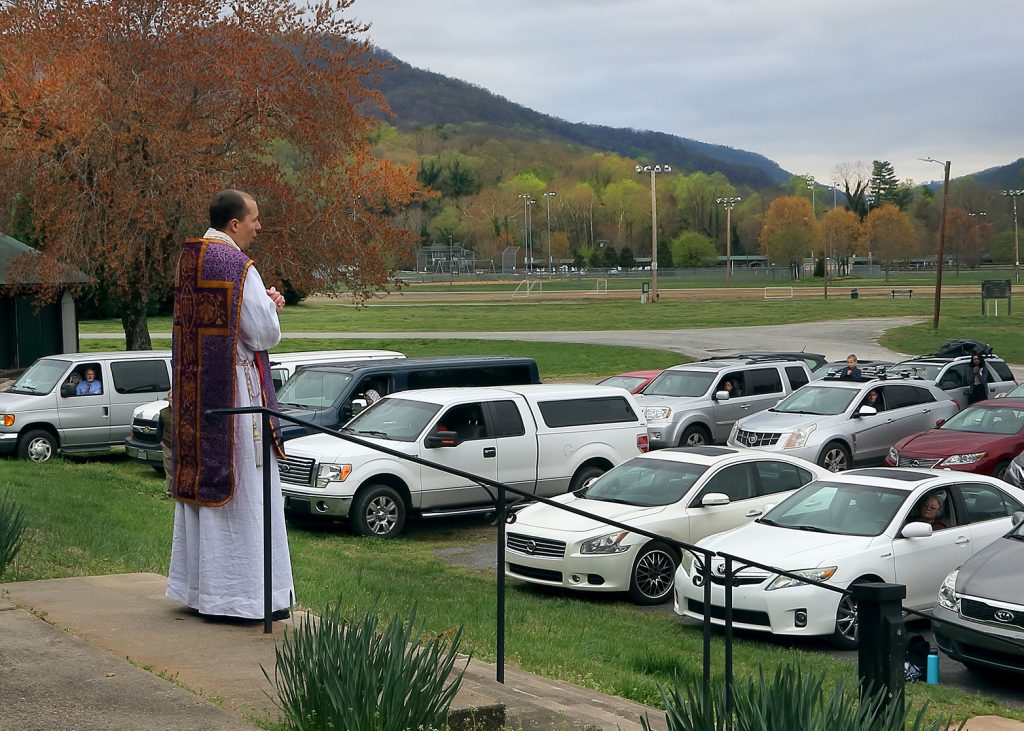 Some of those health workers are women religious who are working as doctors and nurses in hospitals around the world, caring for those who have contracted COVID-19.

The Daughters of St. Camillus, dedicated to nursing the sick and elderly as part of their charism, run several Italian hospitals and have been on the front lines since the dawn of the pandemic, risking their own health in the process.

“We Daughters of St. Camillus make a fourth vow, in addition to the three classic vows of poverty, obedience and chastity: that of serving the sick even at the cost of our lives,” said Sister Lancy Ezhupara, secretary-general of her order, in an interview with Vatican Radio.

“Priests and women religious dedicate their lives to the community of Christ, so they are called to risk and push the boundaries to be there for those in need,” Father Morozowich said. “We have to respect good guidelines, but it’s our duty to make sure no one in the Christian community is abandoned.”