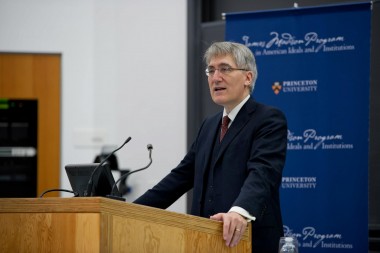 Robert P. George, the McCormick Professor of Jurisprudence and Director of the James Madison Program in American Ideals and Institutions at Princeton University, will be the speaker following the Fort Wayne Red Mass at the Cathedral of the Immaculate Conception in early October.

FORT WAYNE — Robert P. George, the McCormick Professor of Jurisprudence and Director of the James Madison Program in American Ideals and Institutions at Princeton University, will be the speaker following the Fort Wayne Red Mass at the Cathedral of the Immaculate Conception in early October. The talk and a dinner will be held following the Mass in the Archbishop Noll Catholic Center in downtown Fort Wayne. The evening is hosted by the Diocese of Fort Wayne-South Bend and the St. Thomas More Society in Fort Wayne.

Bishop Kevin C. Rhoades extends an invitation to lawyers, judges and civil government officials in the Allen County and surrounding counties area to attend the Red Mass at the Cathedral of the Immaculate Conception on Wednesday, Oct. 2, at 5:30 p.m.

His talk after the Mass is entitled “What Marriage Is … and Isn’t?”

“I will explain what marriage is, and what it isn’t,” George said in an email interview with Today’s Catholic. “I will also explain why government has a legitimate interest in marriage and why law rightly recognizes and supports marriage. Finally, I will explain why it is so critical to the common good for law to define marriage correctly — that is, in line with the truth of what marriage actually is.”

He is a recipient of the United States Presidential Citizens Medal and the Honorific Medal for the Defense of Human Rights of the Republic of Poland. His other honors include the Canterbury Medal of the Becket Fund for Religious Liberty, the Sidney Hook Memorial Award of the National Association of Scholars, the Philip Merrill Award of the American Council of Trustees and Alumni, and the Bradley Prize for Intellectual and Civic Achievement.

A graduate of Swarthmore College, where he was elected to Phi Beta Kappa, he holds a J.D. from Harvard Law School, an M.T.S. from Harvard Divinity School, and a doctorate in philosophy of law from Oxford University. He has received honorary doctorates of law, letters, ethics, science, divinity, humane letters, civil law and juridical science.

George addressed being a conservative heavyweight in the liberal environment of Princeton University. “I enjoy being what a cover story of the Princeton Alumni Weekly magazine called me: ‘The Heretic in the Temple,’” George said. “Orthodoxies have their place, but that place is not in secular academic discourse. I take it as my job to question such orthodoxies when they form. I want to make sure that students form their opinions on the basis of reasons and arguments — not trends and fashions.”

George’s interests include bluegrass music, English literature — especially of the 18th and 19th centuries — and fishing.

A Red Mass will be celebrated in the South Bend area at the Basilica of the Sacred Heart at the University of Notre Dame on Monday, Oct. 7, at 5:15 p.m.

Bishop Kevin C. Rhoades, the Notre Dame Law School, the Department of Political Science, the Interdisciplinary Program in Constitutional Studies and the members of the Red Mass Committee extend an invitation to lawyers, judges, law and political science students and civil government officials to attend the ancient rite.

The celebration will be followed by a reception at the Eck Hall of Law, Eck Commons on the second floor.

Contact Helen Austgen at
[email protected] to attend.
The Mass is open to the public.