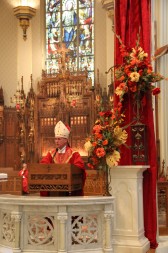 Bishop Kevin C. Rhoades speaks to legal professionals at the Red Mass held at the Cathedral of the Immaculate Conception on Oct. 2.

FORT WAYNE — Lawyers, judges and civil government officials in the Allen County and surrounding area were invited to attend the Red Mass at the Cathedral of the Immaculate Conception on Wednesday, Oct. 2. Bishop Kevin C. Rhoades was the celebrant.

The evening, that has become an annual tradition in Fort Wayne, was hosted by the Diocese of Fort Wayne-South Bend and the recently formed St. Thomas More Society in Fort Wayne. Those in the legal profession and law students in South Bend celebrated on Monday, Oct. 7, at the Basilica of the Sacred Heart on the campus of the University of Notre Dame. Participants included students and faculty of the law school, the Department of Political Science and the Interdisciplinary Program in Constitutional Studies.

Do not be conformed to this world

At the Red Mass, Bishop Rhoades spoke in his homily about St. Paul’s urging the faithful not to be “conformed to this world” but to live true freedom that is obedience to the will of God.

“You who are members of the legal profession do the Church and the world a great service as you bear witness to Christ in your profession, living and proclaiming the true freedom St. Paul is talking about, the freedom that is founded in truth, the freedom that comes from obedience to God’s will,” Bishop Rhoades said. “You are called to remind others that the only foundation capable of sustaining our democratic republic, a true culture of freedom, is what the Founders of our nation called ‘self-evident’ truths. In doing so, you are heeding the counsel of St. Paul not ‘to be conformed to this world’ since a distorted notion of freedom has done much damage to our culture. You do a great service by witnessing to the truth that obedience to God’s commandments, particularly the natural law and objective moral values, is the pathway to genuine freedom and also the source of true happiness.”

St. Paul’s admonition, “not to be conformed to this world” has special relevance and urgency in the current cultural context “in which skepticism about the very existence of ‘moral truth’ and an ‘objective moral law’ is quite prevalent,” he said.

The bishop said this attitude is quite common in many academic and political circles. People can feel pressured by forces, which contradict the things they know in their hearts to be true, like the truth about the nature of marriage.

“We face many cultural pressures in today’s society that promote false notions of freedom and equality while we try to uphold the moral law that is inscribed in our very humanity, the moral law that we can know by rational reflection, obligations that are universally true and binding, like the obligation to respect and protect all human life,” Bishop Rhoades said. “Upholding moral truth is seen by many as intolerance or as an abrogation of freedom (think, for example, of the rhetoric of pro-choice advocates). But this mentality distorts freedom, making it merely an assertion of one’s will.”

Bishop Rhoades spoke about how the U.S. Bishops are vigorously fighting the unjust HHS mandate as a matter of religious liberty and freedom of conscience.

“We are defending the dignity of conscience,” he said. “Conscience is that holy place where God reveals to us our true good. It is important that people understand that conscience is not the mere assertion of personal will. Consciences must be formed so as to discern what corresponds to the eternal, objective and universal divine law, something human reason and intelligence is capable of discovering. So the freedom of conscience we seek to defend is never freedom from the truth. It is freedom in the truth.”

As lawyers, judges, professors and students of law or political science, Bishop Rhoades said, “the Church needs you to be servants of the truth about the human person and about marriage, defenders of human dignity, and promoters of authentic human freedom, including religious liberty. You can help to rebuild the moral foundations of a genuine culture of freedom. I believe the future of our nation depends on a culture that adheres to the moral truths and values without which our democracy is imperiled.”

He spoke of St. Thomas More, the patron saint of those in the legal profession, and an example and model of moral integrity.

“He was absolutely faithful to his civil duties, and through his fidelity to his conscience, brought the values of the Gospel to the civil sphere,” Bishop Rhoades said. “Because of his fidelity and his refusal to violate his conscience formed by moral truth, rejecting any compromise, he was beheaded.”

“He was a martyr of freedom, authentic freedom based on truth. He shows us the primacy of truth over power and goodness over utility,” he added. “He was a martyr for the primacy of conscience, firmly grounded in moral truth. He inspires us by his fidelity to the truth that is more important than success, popularity or prosperity. It is upon such fidelity to irrevocable principles that the dignity of the human person and the justice of civil society depend. St. Thomas More was the king’s loyal servant, but God’s servant first. At this Red Mass, we invoke his intercession.”

‘What Marriage Is … and Isn’t’

Following the Mass, Robert P. George, the McCormick Professor of Jurisprudence and Director of the James Madison Program in American Ideals and Institutions at Princeton University, spoke via teleconference at a dinner in the Archbishop Noll Catholic Center.

His talk was entitled “What Marriage Is … and Isn’t?”

He spoke of marriage as a comprehensive sharing of life, a union at the bodily and emotional levels. His talk also explored how marriage is structured by norms of conduct and why marriage is a matter of public concern, rather than a purely private relationship.

George, along with Sherif Girgis and Ryan T. Anderson, co-wrote the book, “What Is Marriage? Man and Woman: A Defense” that identifies and defends reason for the historic consensus that no society had seen marriage as anything other than a conjugal partnership, a male-female union. The book, published by Encounter Books, is available at the Cathedral Bookstore for $15.99, and shows why redefining civil marriage is unnecessary, unreasonable and contrary to the common good.