The Solemnity of the Annunciation of the Lord falls on March 25, precisely nine months ahead of Christmas, the Solemnity of the Nativity of the Lord. This day commemorates when the angel Gabriel appeared to the Blessed Virgin Mary and relayed to her the message from God that she was to give birth to the Savior of the world, Jesus Christ, through the Holy Spirit. Of her own free will, Mary could have rejected this proposed path, but she didn’t. Her acceptance of God’s will is a powerful testimony of faith for all ages, and is cause for celebration.

Bishop Kevin C. Rhoades celebrated Mass for the Annunciation at St. Pius X Church in Granger, and the occasion was made even more special with the presence of approximately 200 student singers from the Diocese of Fort Wayne-South Bend. The group is Pueri Cantores, a Catholic organization with roots in the Vatican itself. Their purpose is to bring others to the Church through sacred music. 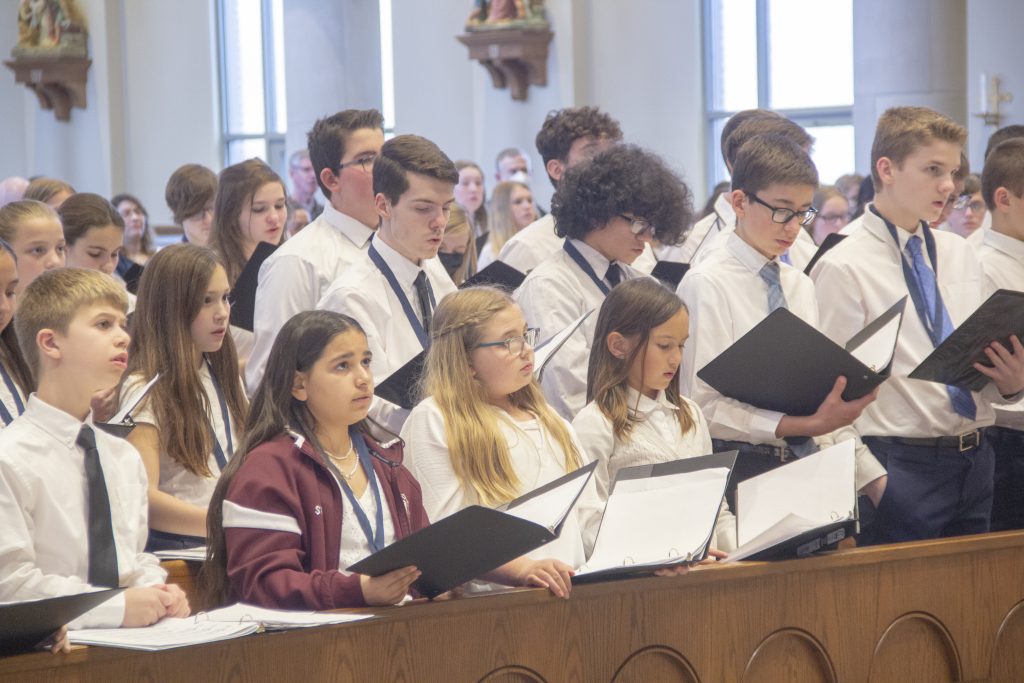 Catholic students from around the Diocese of Fort Wayne-South Bend performed at St. Pius X Church in Granger on March 25 during the Mass celebrated for the Solemnity of the Annunciation of the Lord.

The choir performed during the Mass in English, Latin and Spanish. They also sang prior to the rosary recited for an end to the Russian-Ukrainian conflict and the Act of Consecration to the Immaculate Heart of Mary. All three events were live streamed for the entire diocese, with the rosary and consecration occurring at the exact same time around the world in communion with Pope Francis and the Catholic Church.

Jeremy Hoy, Director of Liturgy and Music for St. Pius X Church, conducted the singers that day. Pueri Cantores is Latin for “young choristers,” he explained. With pride, Hoy also went on to describe the choir’s interworking details and the young participants’ hardworking natures.

Fourth-graders through high school seniors displayed their musical abilities in the singing group. In addition to diocesan homeschoolers, represented schools included all four Catholic high schools, both Elkhart grade schools and a handful of schools in Fort Wayne and South Bend and the surrounding areas. 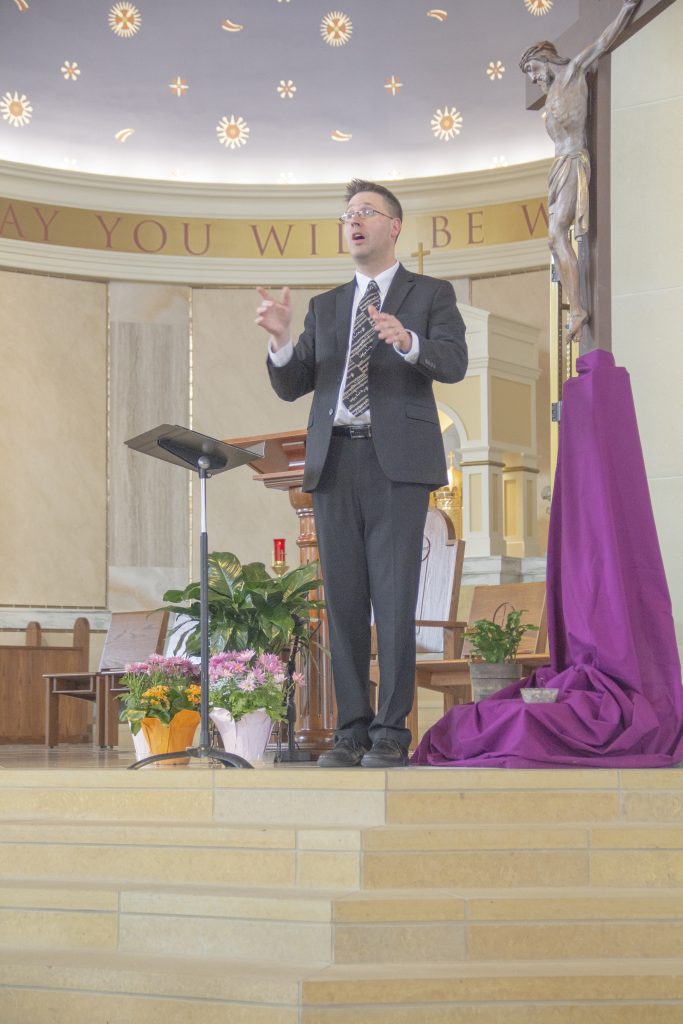 Of the many pieces presented during the Mass, Hoy described one in particular as the day’s masterpiece – a rendition of Paul Manz’s “The Angel Gabriel from Heaven Came,” arranged by T.A. Ohnesorge. This was sung during the preparation of the altar, as well as during the consecration.

The piece was a five-part harmony that was impressively comprised of two soprano groups as well as alto, tenor and bass groups. Echoing the words of both Gabriel and Mary, Pueri Cantores professed the Solemnity’s meaning through a beautiful array of angelic vocals.

Hoy spoke highly of the young vocalists. “I am amazed at what these students accomplished today,” he said. “They were very attentive the whole day and really worked hard on the things I asked of them. I am very proud of them!”

Bishop Rhoades began his homily by praising the singers’ charismatic musical talents. He then explained the importance of the day’s Solemnity. “We are celebrating today the greatest event in human history,” he emphasized. “Why do we say that? It is because today, God became man.”

The bishop explained the many ways in which God’s humble love was on display. As opposed to being born in the luxurious city of Rome, Christ was born in the small town of Bethlehem. And Mary, his mother, was no upper-class aristocrat or royalty; she was a young, newly betrothed virgin.

Transitioning from Christ’s conception to Mary’s, Bishop Rhoades further explained her unique role in history as she had no stain of original sin. He then focused on the wording used at the beginning of the Hail Mary. “We repeat [the] words of the angel Gabriel so often: ‘Hail Mary, full of grace, the Lord is with thee.’ That’s exactly what Gabriel said to Mary – that was his greeting to her … If you listen to the Gospel, he said, ‘Hail, full of grace.’”

“Hail” means “rejoice,” he continued, as all Christians are called to do on that day. The Incarnation, he said, brought the faithful eternal life by delivering them from sin and damnation.

“Even though she didn’t understand completely, she trusted God’s word that she received as a message from the angel,” the bishop said. This acceptance of God’s plans as well as her lack of sin is why the Catholic Church honors Mary so dearly; she is the Church’s “pillar of faith.” 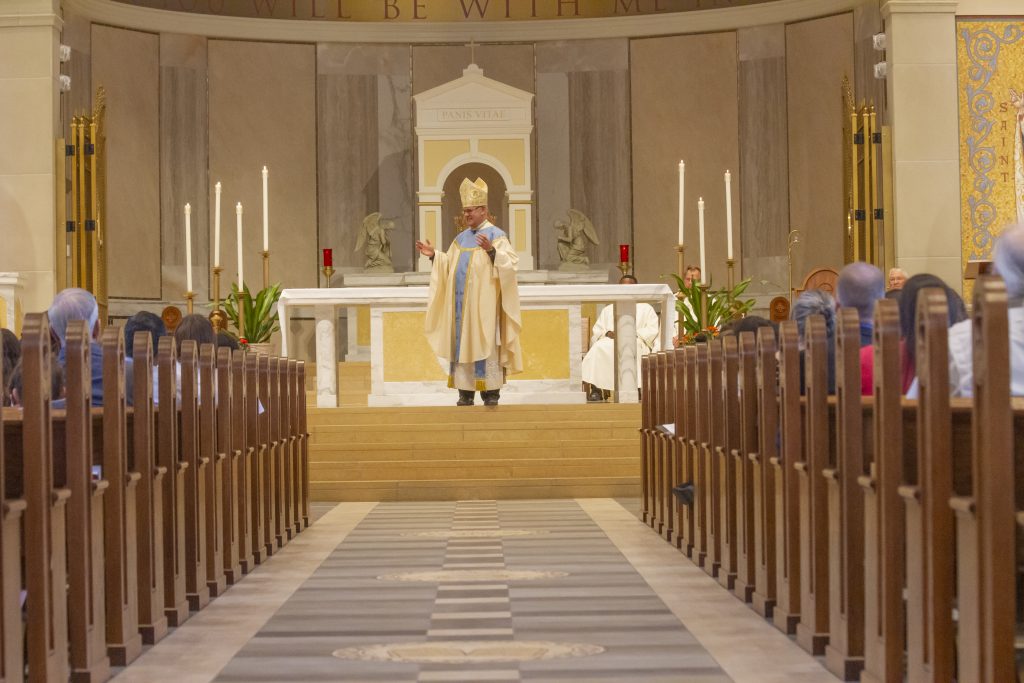 Bishop Rhoades concluded by recounting his own journey of accepting God’s will. Initially, a vocation to the priesthood wasn’t his definite path, he said, and he even considered the vocation of marriage.

“And I remember, I was praying and there was a statue of the Blessed Virgin Mary … and I could imagine her saying, ‘Lord, do with me what You will. Behold, I am the handmaid of the Lord. Let it be done to me according to your word.’” Taking this to heart, he prayed Mary’s fiat, her “yes” to God, which means “let it be done.” It was then that Bishop Rhoades understood God’s call for him to become a priest – he experienced joy and peace with this path.

“Because, you know, in God’s will is our peace,” he said. Like Mary, he instructed those present and watching over live stream to “be obedient to God’s will.” And doing just so, by practicing the charism that God had bestowed upon them, Pueri Cantores sang as Bishop Rhoades concluded the Mass.