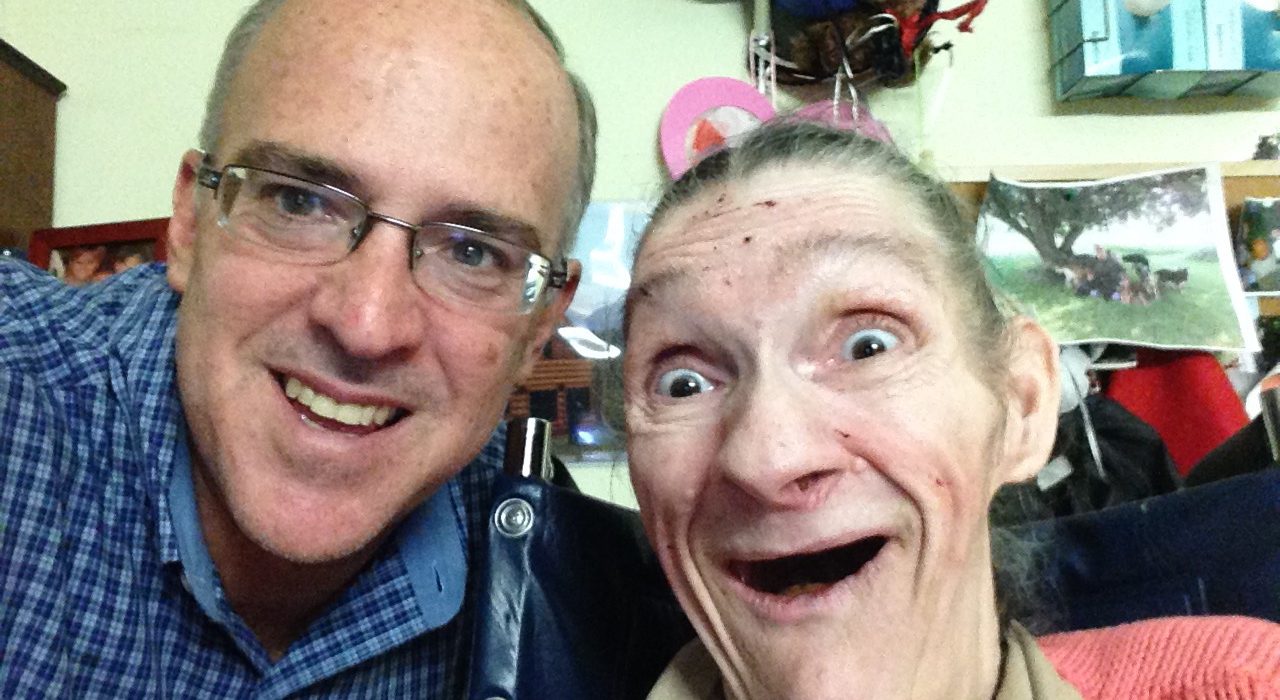 On one of the busiest street corners on South Bend, Eddy and LaSalle, stands a building that most speed by as soon as the light turns green. Ironically, many of the people in that building move at the opposite pace, one small shuffle or push of the wheelchair at a time.

There is a hidden holiness the building’s “Cardinal Nursing Home” sign: a beauty and passion for life that quietly flourishes in the residents whom the Sant’Egidio Community simply calls “friends”.

Sant’Egidio began in Rome in the 1960s simply to live the Gospel in friendship with the poor. The community has spread through of the world and is best known for aiding the Peace Treaty of Mozambique after a bloody civil war. In September of 2002, a South Bend community of the famous international group was formed.

Stroke victim Nancy Dowlut, at right, is one the seniors who resides at Cardinal Nursing Home in South Bend and to whom Dan Philpott and other members of the Sant’Egidio Community minister regularly.

Professor Daniel Philpott was one of the four men who found the local Sant’Egidio Community. “In the poor we find Jesus himself, as the Gospel of Matthew records him explaining in Chapter 25. We love the poor because Jesus loves the poor with such a special love that He dwells in them,” he said. “Besides friendship, we come without agenda or program. It’s very simple. We don’t call it ‘ministry’ or ‘service’ or ‘volunteering’; rather, it is simple friendship. We try to be with them and get to know them in all of their particularity. … We have visited them in the hospital. We have gone to their funeral when they die. We pray with them. We are often surprised by the mutuality of the friendship. They give us gifts, or say something nice to us, or simply share a smile — and we go home rich.”

The members lead weekly prayer, the daily prayer of the church, and facilitate a monthly Mass at Cardinal. A beautiful tradition in the Sant’Egidio Community is that a book is kept of friends who have died, with photos and stories, so that they may be remembered. In the case of Cardinal Nursing Home residents, many of these friends were left or forgotten by their families, very poor and never had a visitor to remember them.

Visiting Cardinal Nursing Home is not a “check-off a box” or a drudgery obligation for members of the community; they think of it as a friend’s home whom they want to visit, and friends whom they miss and love. This love is transformative.

Nancy Dowlut’s life is one that transformed Philpott.

Dowlut was born in South Bend in 1949, a parishioner of St. Patrick Church. A “committed Catholic and person of faith,” she still remembers her first Eucharist with Father Drielsko in 1956, when she was 7 years old. She attended Navarre Elementary, St. Patrick School, Washington High School and then studied mechanical engineering at IUSB and IU Gary. Very bright, she studied Russian both in high school and college. Nancy then worked for Shell Oil, with oil exploration, traveling to Louisiana. She received a master’s degree in physics and soon afterward married James Dowlut and went to live in North Liberty. There she went to school again and studied library science and became a public librarian.

For 20 years Dowlut lived on a farm and worked as a librarian until suddenly when she was 55, she had a stroke. A condition she was born with, spinal meningitis, had possibly reoccurred. Her mother cared for her and she recovered slightly but then relapsed into her current condition. For the past 13 years Dowlut has not been able to speak or walk. Her hands, which cared for so many books of knowledge, are now bent and twisted.

She met the Sant’Egidio Community simply because her feet were cold, as her slippers kept falling off. A member of the community bought her some slippers to keep them warm. Wanting to get to know her, and despite the verbal language divide, Judy Coros from the community devised a board of letters and pictures. Dowlut could point and spell out words, while charades and gestures filled in the gaps. This allowed a bud of a friendship to blossom.

Philpott describes his friendship with her as well. “In Nancy I have had the gift of coming to know an extraordinary person…. Nancy has a picture of my family with my daughter as a baby on her shelf. Coming to know her as a dear friend, I have learned to communicate with her easily and without words. Albeit through many episodes of misinterpretation, I can often tell what she is saying through her gestures. I can tell when she is frustrated, mischievous, affectionate, or ready to end a conversation and get some rest. She is popular with the nurses and the other residents, remarkably communicating affection to them. …  I often find myself at the receiving end of her expressions of love.”