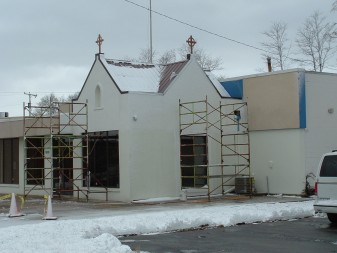 The Life Center, located next to the South Bend abortion business, which is in the process of interior remodeling, will hold an adoration chapel and offices for Saint Joseph County Right to Life, 40 Days for Life, Natural Family Planning, Rachel’s Vineyard (post abortion forgiveness and healing) and Holy Family Catholic Adoption Agency.

SOUTH BEND — “Roe v. Wade is a legal fiction made up out of whole cloth,” Holy Cross Father John Patrick Riley declared. He preached the homily at the prayer service, which was part of the Jan. 20 annual South Bend area Knights of Columbus Right to Life march and program.

Father Riley said that abortion is not a matter of the arguments made back and forth about freedom of choice, constitutional law, legislation or appointing the right judges. “It’s a matter of life and death. It’s about the simple acceptance of life or the toleration of killing, pure and simple,” he said.

He explained that it is a spiritual battle, a struggle against selfishness and sin or the acceptance of life in faith. He noted that Pharoah ordered the extermination of newborn Hebrew males to protect himself from a perceived threat to his power. Herod did likewise in ordering the slaughter of the Holy Innocents. Father Riley held up Mary as the perfect model of the acceptance of life in faith.

He encouraged his listeners to persevere in the struggle for the right to life, affirming that, “For God all things are possible.” He urged that efforts continue to offer extra help to women having difficulty accepting the gift of life.

Fred Everrett, co-director of the diocesan Office of Family Life, gave the principal talk. He noted that America has changed since Roe. v. Wade. Prior to its imposition most states’ laws permitted abortion only as a last case resort to save the life of the mother. Forty years later, Everett said, it is likely that if Roe. v. Wade were overturned that very few states would revert to that almost complete restriction. He blamed this cultural shift on an advancing and pervasive secularism and materialism.

Everett gave a statistical overview of Americans’ views on abortion. He noted that while people under 30 are the most pro-life Americans, that as a whole they “are characterized by an individualistic and relativistic morality, by a consumerist approach to life that minimizes helping others, and by a reluctance to become involved in political and civic affairs.”

Everett quoted Pope John Paul II in his encyclical “The Gospel of Life”: “The roots of the contradiction between the solemn affirmation of human rights and their tragic denial in practice lies in a notion of freedom which exalts the isolated individual in an absolute way, and gives no place to solidarity, to openness to others and service of them. … It cannot be denied that such a culture of death, taken as a whole, betrays a completely individualistic concept of freedom, which ends up being the freedom of ‘the strong’ against the weak, who have no choice but to submit.”

The pope also warned that moral relativism at work in politics and governments has led to the undermining of the inviolable dignity of the human person such that “democracy, contradicting its own principles, effectively moves toward a form of totalitarianism.”

Everett observed that “undoing Roe. v. Wade will not be possible unless we change the direction of our culture,” away from secularism and “turn back to God … only a New Evangelization of our nation will be able to change the hearts of our young so as to embrace a culture of life. Only when we return to God and His commandments will Roe v. Wade find itself in the ashbin of history.”

Key to this New Evangelization is for each person to have “an intimate friendship with Jesus Christ” driven by an ardent love and not some imagined burdensome obligation. “Only a love that is passionate will attract others to the truth.” Everett concluded. “What the pro-life movement most needs today are modern saints who radiate the truth and love of God. Nothing else will do. To this greatest of ends let us rededicate ourselves today.” 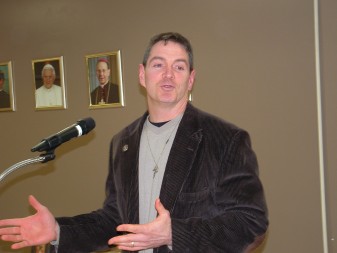 Attorney Shawn Sullivan has been the driving force behind a new pro-life venture known as the Life Center, located next to the South Bend abortion business. The new center, which is in the process of interior remodeling, will hold an adoration chapel and offices for Saint Joseph County Right to Life, 40 Days for Life, Natural Family Planning, Rachel’s Vineyard (post abortion forgiveness and healing) and Holy Family Catholic Adoption Agency.

Sullivan described his response in faith to a seemingly impossible quest when all efforts to find a building near the South Bend abortion business had failed. In a sudden and unexpected turn of events, the owner of the building next door to the abortion business, who had already entered into an agreement to sell it to another party, gave Sullivan 40 days to come up with the money for the purchase. The deadline was All Saints Day, which Sullivan took as a certain sign against all human odds that his effort would be successful.

The improbable did happen. Exterior remodeling has been completed and features two A-framed roofs, each topped by a Celtic cross. The Life Center is an outreach of the Apostolate of Divine Mercy in the Service of Human Life, which Bishop Kevin C. Rhoades has approved. Sullivan is the moderator.