A year after the death of abortionist Ulrich Klopfer, a ministry group located next door to his former South Bend clinic continues its mission of saving unborn babies and caring for mothers.

The Apostolate of Divine Mercy in Service of Life, Marriage and the Family began with the idea that a perpetual adoration chapel should be located next to the Women’s Pavilion, where Klopfer performed abortions three days a week.

Shawn Sullivan was the driving force behind the apostolate. Its members claim 102 victorious “saves” in the seven years since Bishop Kevin C. Rhoades dedicated the chapel’s altar. Sullivan explained how the idea first came about.

“I had a conversion in 2000 and it slowly escalated. Then I got into pro-life work … and it started climaxing into the call that God was asking me to build an adoration chapel next to the abortion clinic.” 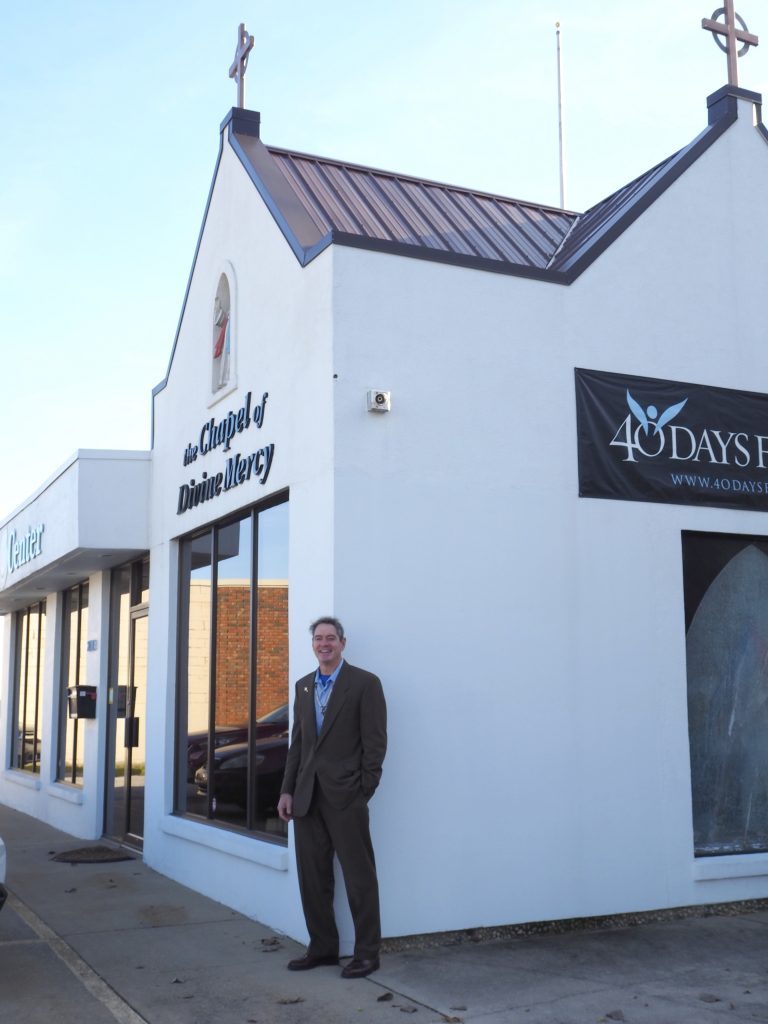 Jennifer Barton
Shawn Sullivan felt called to build a chapel next door to an abortion facility that was located in South Bend, forming the Apostolate of Divine Mercy in Service of Life, Marriage and the Family. In its seven years, the ministry has helped 102 mothers choose life for their unborn children.

The Life Center is born

Prior to the chapel’s existence, he said volunteers would set up a tent and engage in sidewalk counseling “before we even had a sidewalk.” Eventually, they were able to get permission to pour a sidewalk that contained the words “life begins at conception” inset in wooden letters. Klopfer ran over the letters the day after they were installed, but the words remain imprinted in the pavement.

Sullivan had begun spending much time in prayer at the convent of the Sisters of St. Francis of Perpetual Adoration in Mishawaka, so he understood the power of prayer in helping end the sin of abortion. He was unsure if he would get approval to begin such a large undertaking, but he began to pray. On Sept. 4, 2012, Bishop Rhoades gave his approval.

The difficulty came in finding a viable building and funding the construction. At first, Sullivan was unable to find a building in close proximity whose owner was willing to sell to him. Unsure of how to tell the bishop about this apparent failure, he turned to prayer again. Miraculously, he feels, he received an email from a bank that was foreclosing on the building directly next to the clinic, stating that if he could close in 40 days, the building was his.

Forty is a significant number in the pro-life movement, due to the 40 Days for Life campaigns in which Sullivan was already involved. “And the closing date would be Nov. 1, All Saints’ Day,” Sullivan remembered.

With the building lined up, the next step was obtaining the $250,000 needed to purchase the property. Word of the potential new chapel got around, and a television news crew came to the clinic to interview clinic staff about it. Sullivan was outside and told the media they should also interview him to balance the story.

The story broke on the day of the St. Joseph County Right to Life banquet, where he met a gentleman who wanted to fund the project. The building came to be known as The Life Center. 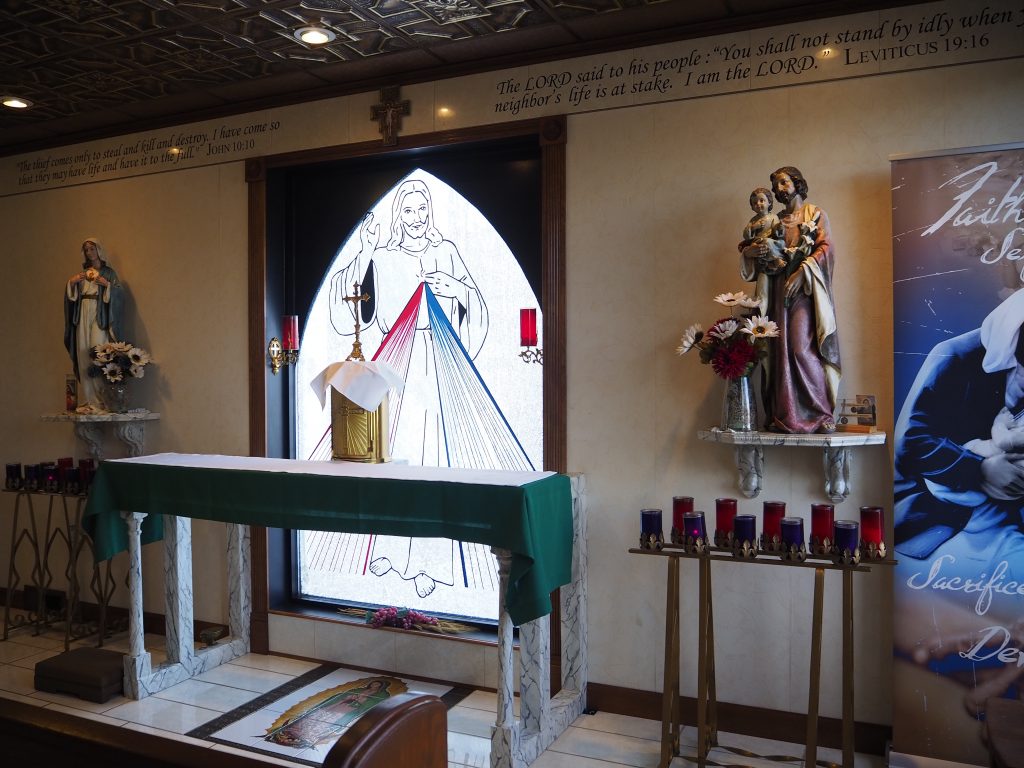 A chapel is the main feature of The Life Center. A large window covered with the image of the Divine Mercy faces the clinic, and renovations included providing a place where volunteers could see women going into the clinic and offer prayers for them before the monstrance. If a counselor spoke with a woman, runners were able to take the woman’s name to those inside, who could then pray for her specifically.

Even before the chapel was complete, the apostolate was saving unborn lives. Sullivan shared the story of a volunteer who had a “save” during construction. The volunteer noticed that women were walking up to the yet-unfinished window — sans the Divine Mercy image — to look inside, leaving their footprints in the snow outside. She told Sullivan and “sure enough, we’re in here working and you see this girl come to our front door.” He met her, asked if she was here for her appointment and walked her over to the Women’s Care Center located across the drive. Ultimately, the young woman chose life for her child.

Similar stories of women assisted by the apostolate are numerous and “all of them have their own unique flavor to them,” Sullivan remarked. Domestic abuse victims, women with medical conditions, women who feared losing their boyfriends all still live in Sullivan’s heart and memory. He remains in contact with a number of the mothers his apostolate has aided, checking in on them and hearing their success stories. One of them even became a sidewalk counselor and reaches out to women in similar situations to hers. 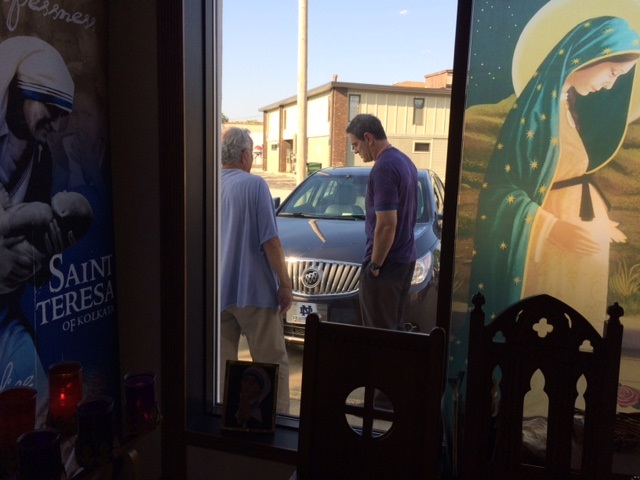 Provided by Shawn Sullivan
Sullivan said abortionist Ulrich Klopfer eventually began to warm up to his pro-life adversaries, and toward the end of his days would sometimes visit The Life Center, holding discussions with members of the apostolate.

Adoration hours were set to match those of Klofper’s working hours at the clinic. When abortion facilities in Niles, Michigan, and Ohio closed, pregnant women were sent to South Bend. Eventually Klopfer’s clinics in Fort Wayne and Gary both closed as well, flooding the South Bend office with mothers in crisis.

In the time between consecration of the chapel in October of 2013 and the Women’s Pavilion closing its doors, 102 women chose life for their unborn babies. In the first year of the chapel’s existence, abortions dropped from roughly 1,300 to 500.

Sullivan recalls the bishop telling him that they were going to have saves, but even Sullivan had not expected numbers that high.

“We didn’t think that we had a chance of making that kind of dent. … It was mainly as issue of reparation. We had to do something.”

At one time, the apostolate hosted an adoption agency, a natural family planning office and what Sullivan calls “TOBIT,” or Theology of the Body Intensity Training or Intellectual Training. He stated, “It’s got all these different levels of Theology of the Body. You go from the little capsule (of discussion) you’d use with somebody maybe at a coffeehouse where you’re just having a small conversation and you hand him a little brochure … to super advanced intellectual study of the matter and getting into (Pope St. John Paul II’s) works. Also because Tobit was one of the books that Luther took out of the Bible, it’s a great evangelical tool.”

The closure of Klopfer’s clinic did not automatically eradicate the apostolate’s mission. “What we’ve been doing is branching out and going to the other abortion clinics.” Since Planned Parenthood of Mishawaka does not perform abortions, dedicated members of the apostolate travel as far as Merrillville, where they are performed. 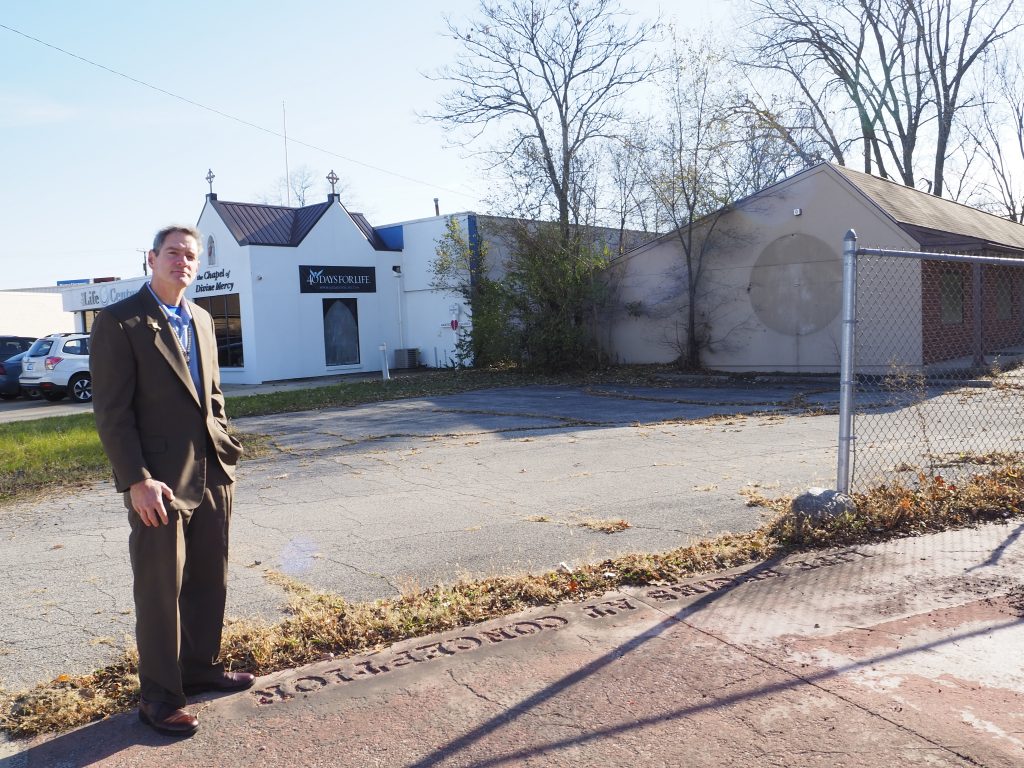 With the opening of Whole Woman’s Health of South Bend about 15 minutes away — a facility that offers chemical abortions — the team has gone into action with the same type of advocacy as before.

Prayer has always been at the heart of the apostolate’s mission. In 2015, when Sullivan helped file 42 complaints against Klopfer for health and safety violations, the group began a perpetual adoration novena.

“We ended it at 4 a.m. on a Friday morning, and then we’re all out there gearing up and notice no one’s coming to Klopfer’s place. He doesn’t open. We were floored.” According to Sullivan, Klopfer never missed a day of work. But that day, a letter came in the mail stating the complaints were substantiated and his license had been terminated.

Though he appealed and remained open until that November, the Women’s Pavilion was eventually closed for good. Surprisingly, Klopfer still came to the location and was known to speak to apostolate members and even pray in the chapel.

Sullivan and his team have chosen several saints as their patrons. St. Mother Teresa is their main patroness. On Sept. 4, 2016, her canonization date and the anniversary of the founding of the apostolate, Bishop Rhoades officially entrusted the ministry to her. “We were probably the first apostolate in the world entrusted to Mother Teresa. That’s an official, canonical thing,” Sullivan noted.

As a lawyer, he has made enemies in legal fights against abortion. He also knows he could make more money on other cases. “But all the miracles, though – that kind of helps propel you. When every day something was happening to let you know that God was pushing the buttons, he was orchestrating it – it just made it possible.”