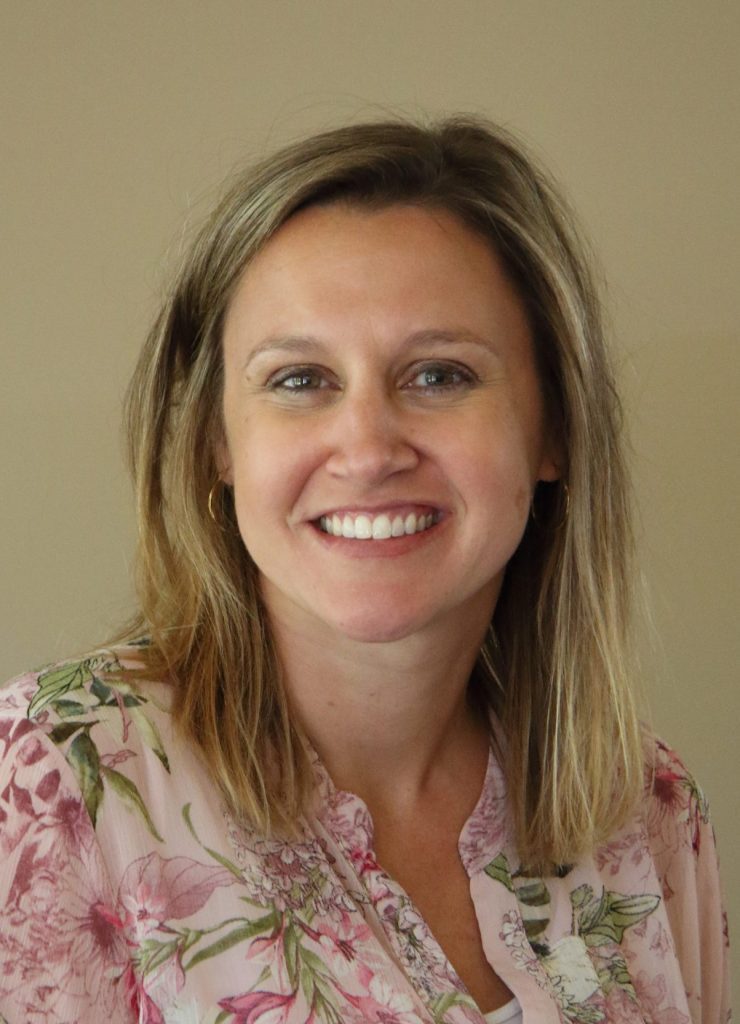 For Abigail Stanley, the administrative position of principal at St. Bernard School in Wabash feels like so much more than a job – it’s her home. “I grew up attending St. Bernard’s for grade school, and it is my home parish,” she shared.

Attending the school for first through fifth grades left an impression on her faith and her future vocation. “I wasn’t entirely sure what I wanted to do when I was in college,” she said, “but I remembered my time in youth group, and the opportunity to serve others in this community never left me.”

Stanley was raised Catholic. She is the third of four children, and all the siblings remain close, she said. They grew up attending youth group at St. Bernard.

Because the school is small, she was also very close to her classmates as a child. Her fondest memories include attending field trips and playing on the playground.

St. Bernard School stopped at fifth grade during her time attending, so Stanley then went to Wabash Middle School and Wabash High School. During her adolescence, she became very involved in the youth group at St. Bernard.

Once, the group went on a mission trip to New Jersey to renovate a school that had peeling wallpaper. They cleaned, worked with some of the students who attended there, and played with and tutored them.

“There was a lot of community service during those years,” she recalled, “which I look back and realize shaped where I am today.”

After graduating high school, Stanley chose Indiana University-Bloomington for postsecondary education. While there, she remained uncertain about her vocational direction.

“I knew I loved kids, partly because of my experiences in youth group,” she said. “Teaching never really stood out at first, but I had to make a decision and I chose to go into the field of education.”

Stanley finished, got her elementary educational license and then completed her student teaching at a local school near her home. She resumed attending Mass at St. Bernard with her parents during that time.

“I job-hopped a little,” she admitted, “but I honestly felt called to come home.”

Her teaching experience was formed by the different cultures, lifestyles, languages and socioeconomic statuses to which she was exposed in those days. She taught abroad in Australia, which helped her realize something powerful.

“Despite how differently Australians educate their kids and live, kids are kids. They want engagement, and they need our time and attention. They all just want to feel love from their teachers and administrators,” she shared.

Stanley and her husband married in 2013 at St. Bernard and agreed to settle down at the parish.

“There are other Catholic churches in the area we could have attended, but this was home,” she said. Stanley got her administrative license the same year from Purdue University-Fort Wayne. The couple have two children: Drew is 6 and will attend kindergarten at St. Bernard this fall, and Gwen is 3 and is “spunky.”

Once the children were born, she put school administration on hold for a while. She began praying, “God, where and when do you want me to do this?” Then followed a period of waiting for her calling and for the timing of the right job to fall into place.

When the job as principal at St. Bernard opened, she felt strongly it was meant for her, especially since her son will be starting kindergarten this fall.

“I feel I can have a true impact on the school, the families and the students, and try to spread the word in the community that this school is an excellent educational and faith option for their children,” she explained.

What makes St. Bernard stand out among other area schools and parishes is how welcome and accepted people feel at the parish, she said. The pastor, Father Levi Nkwocha, acknowledges visitors at every weekend Mass. Stanley loves the aesthetics of the cathedral-style church, too; she said that its beauty mesmerizes with high ceilings, organ music and stain-glassed windows.

She considers the ambiance to be a gift to her because it is conducive to prayer and worship. Entering the church helps elevate her heart and soul to a greater love for God.

“Other parishes I’ve attended were so busy and distracting for me,” she explained, “but at St. Bernard’s, I feel a sense of calm, which is conducive to a sense of interior peace. Knowing when the choir will sing and to be able to share this experience with my children and pass on these values to them is very special to me.”

Stanley said she didn’t appreciate her Catholic faith strongly as a child, but as an adult, she recognizes with gratitude how St. Bernard formed and shaped her. She loves how grounded in tradition it is.

What she is most looking forward to as principal is getting to know the families and children at St. Bernard. She knows they chose the school for a reason, and she wants to share her experiences as a child with these families, to form their children in their faith and character-building and set a standard for excellence in academics. She wants to help develop the whole person in mind, body and soul.

“I know why I was waiting for the right opportunity to come along,” she reflected. “I have seen what else is out there. I chose St. Bernard’s for my own children. That says a lot about the parish and the school.”