The universality of the Church unites Catholics all over the world, be they in the U.S., Africa or elsewhere. Forms of worship may appear slightly different throughout the world, but the sacrifice of the Mass is the same.

To shed light on the universal nature of the Church, Father Robert Garrow, pastor of St. Stanislaus Kostka, New Carlisle, invited Father Sunday Akuh, parochial vicar of Holy Family Parish and St. John the Baptist Parish in South Bend, to his parish to speak about Catholicism in Nigeria on March 16.

When Father Garrow took over as pastor of St. Stanislaus last year, he began sharing meals with Father Glenn Kohrman, pastor of Holy Family and St. John the Baptist, and Father Akuh. “During our meals, we discuss the universal Church and Father Sunday was telling us about his parish back home. I have also had an interest in the universality of the Church and felt our parish needed to hear the story of how faith is practiced around the world.”

Father Akuh agreed to speak about the faith life in his home country of Nigeria, which, sadly, has been the site of unspeakable violence against Christians, particularly Catholic priests and seminarians, for many years. In his talk, Father Akuh explained the political and economic situation in Nigeria.

Nigeria is a highly populous nation – the highest-populated country in Africa – with numerous natural resources, but it is the “home of good people and a great nation,” Father Akuh said. The government, however, has not been able to effectively run the country nor stop the violence against its people, much of it inflicted by the terrorist group Boko Haram.

“Even as the country battles with institutional corruption, frequent kidnapping, civil unrest and of course Islamic radicalism, as seen with Boko Haram insurgency, there is still a ray of hope because Jesus and the faith are alive in Nigeria,” Father Akuh stated.

He went on to describe the faith of Nigeria. “The northern half of the country is predominantly Muslim and the south is primarily Christian,” he said. Most of the Christians are of Protestant denominations, but Catholicism is also strong in Nigeria. “The faith is exceptionally vibrant and vital to the daily life of the people, though not without its unique tensions and challenges.” 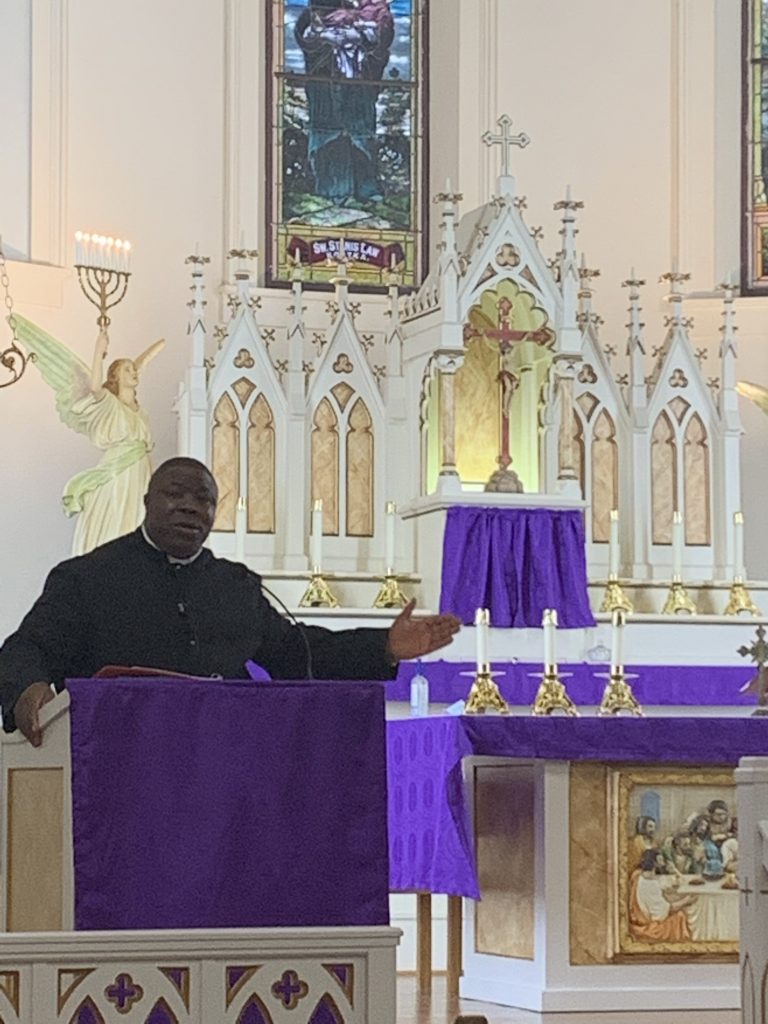 n Nigeria, a typical Mass can last over three hours. “Worship in Africa is often intense, with profound joyful singing and dancing, voiced prayer and fellowship with one another sharing the Gospel of Jesus.” — Father Sunday Akuh

Vocations to the priesthood are high yet funding sometimes leads to young men being turned away from the seminary.

“This is evident in the very many priests produced annually and even in the huge numbers of them on mission around the world as ‘fidei donum’ – gift of faith,” said Father Akuh. The Diocese of Fort Wayne-South Bend has received several of these missionary priests: They are serving within the diocese today, Father Akuh among them.

Family life is central to the Nigerian people. Families are often large, with many children. In Nigerian Catholic families, the faith is lived out joyfully. Daily life revolves around family prayer. The rosary, adoration and visits to the Mary grotto are all common devotions within the family.

The Church in Nigeria is also considered family, Father Akuh continued. “Preparation for the faith and catechism is very thorough and intense in Africa, this accounts for the deepening of the lived sacramental life in Nigeria. Both the parents and the entire faith community share in this pastoral and faith formation from conception through birth, baptism and until burial. “Parish life is very engaging and the faith is a shared experience in Nigeria.”

Father Akuh pointed to numerous parish groups and sodalities that engage the faithful of all ages. These carry out multiple functions within the parish and involvement in one of these groups is required, ensuring “that no one is expected nor permitted to be an anonymous parishioner.”

In Nigeria, a typical Mass can last over three hours. “Worship in Africa is often intense, with profound joyful singing and dancing, voiced prayer and fellowship with one another sharing the Gospel of Jesus,” said Father Akuh. Worship might look a little different, but the same readings are read, the same Eucharist celebrated.

Father Akuh noted that Catholicism in Nigeria extends beyond the church doors and into civil life.

“The daily lived faith extends to the workplace and the public sphere, for as the Mass is ended in church, the Mass continues in the lived experiences in the communities.” The Angelus is often recited publicly, and priests are invited to say Mass in workplaces. 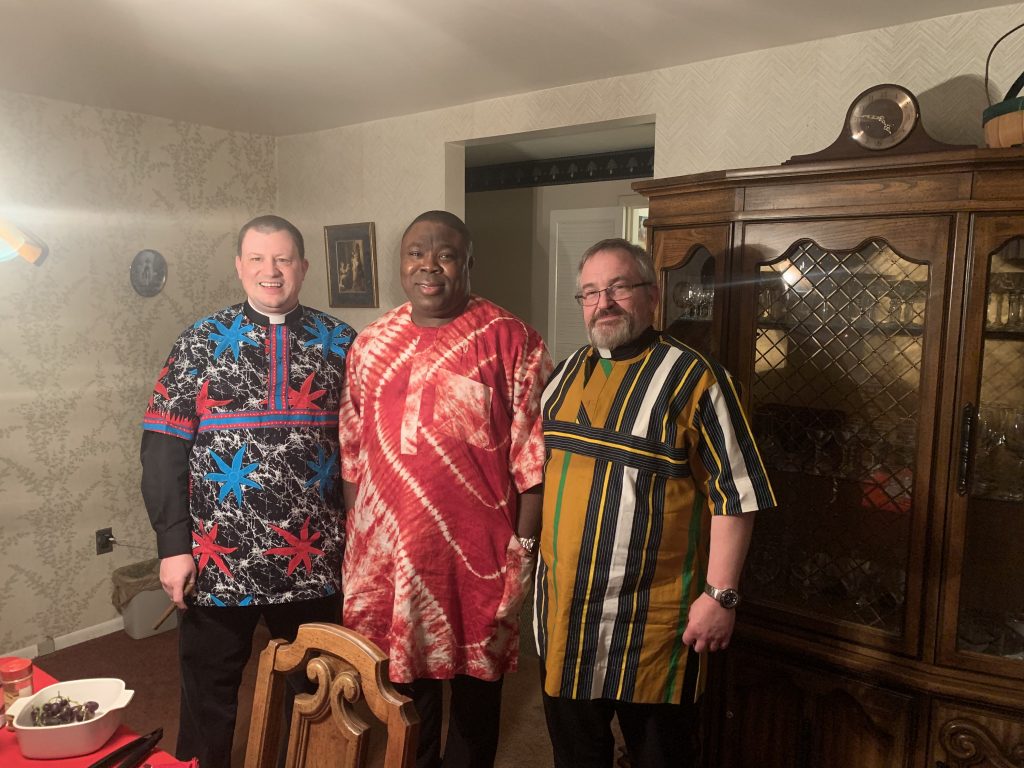 According to Father Garrow, the presentation was “excellent and well-received.” Not only did Father Akuh’s talk give parishioners of St. Stanislaus an opportunity to learn about the vibrant faith life of Nigerian Catholics, but it also gave them a chance to assist them financially. Despite the economic growth that Nigeria has seen in recent years, 40% of the population still lives in poverty. Father Akuh admits that individual resources are scarce, but the faithful are generous and give much to build and fund churches and financially support their priests.

He explained, “During the Lenten season, I always have my parish take up a collection for agencies or organizations that are helping spread God’s love.” He was proud to report that “This year, we helped the Christ Child Society, the Women’s Care Center, the St. Vincent de Paul Society, the Share Foundation, the New Carlisle Food Bank, along with Father Sunday’s parish.”

Through a collection taken up over the weekend following Father Akuh’s talk, the parish raised over $3,500 for St. Michael. This money will be used to purchase seven new stained-glass windows, one of which will feature St. Stanislaus Kostka in honor of the donor. Signs will be placed within the windows asking members of St. Michael to pray for the parish of St. Stanislaus.

St. Stanislaus parishioner Angela Schroeder has previously attended Masses said by Father Akuh at Holy Family Parish and enjoyed his joyful and vibrant homilies, particularly his singing. She was enthused about his witness at her church.

“The event prompted many conversations in our family and with co-workers about Catholic life in Nigeria,” she said. “It’s not often we have a first-hand account of how our ‘one Catholic’ faith is celebrated halfway around the world.”

She continued, “The talk helped us recognize our blessings, explained the impact our generosity can make to our brothers and sisters in Christ and offered constructive ideas for growing closeness in our parish family.”

Schroeder is hopeful that Father Akuh will hold similar talks in the future.

“Father Sunday has an inherent joy that represents the energy of his home congregation and his faith in God. His description of African culture and how the Catholic faith is celebrated in Nigeria was simply fascinating.”