This story, this adventure, begins in the form of a riddle. “What do you get when you combine a group of 12 Catholic men and 188.1 miles of trail with hundreds of prayer intentions?”
The answer was “Disciples on the Run” running group, whose members participated in the Reebok Ragnar Chicago Run June 9-10.
Ragnar Runs occur along plotted trails throughout the United States and are popular among running groups wanting a challenge. The idea to form a Ragnar Run team from among Fort Wayne-area Catholics had been hatched among some friends back in November 2016; the proximity of this year’s Chicago run lent an urgency for the idea in the mind of runner Tom Fean. During the Chicago Ragnar Run, numerous participant team groups would relay their way from Madison, Wis., east through the state and down to Lake Michigan, then continue further south to the beach along Lake Shore Drive in downtown Chicago. 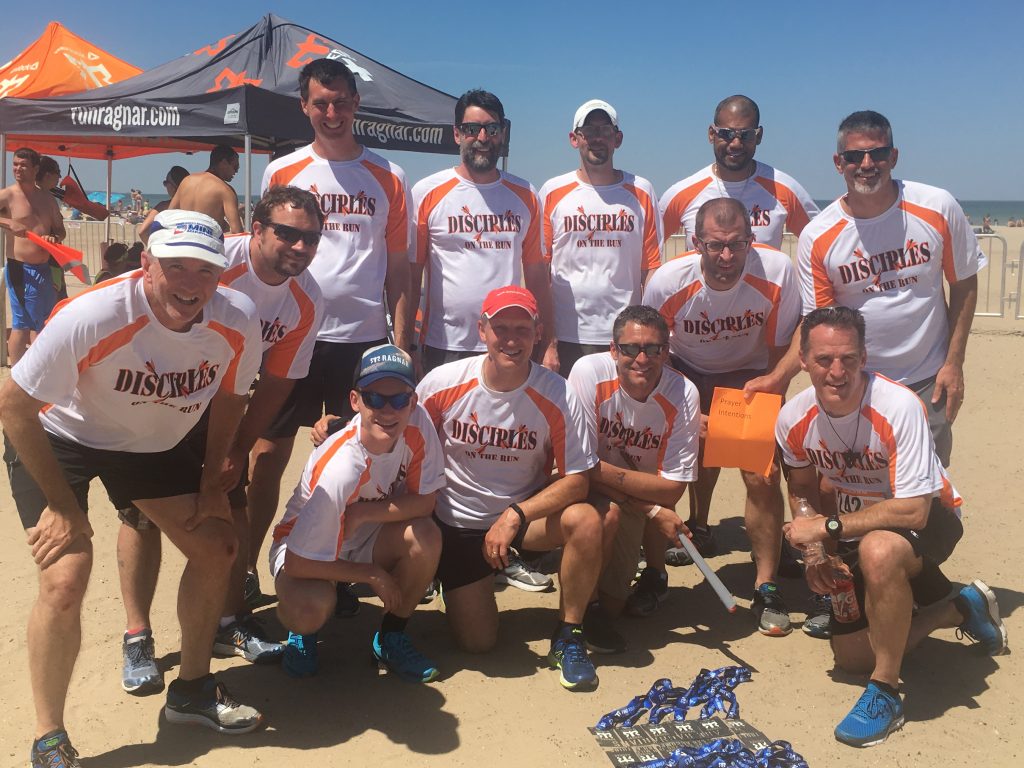 Some running teams do the Ragnar Runs in support of various causes, or to bring awareness to a cause. Fean’s idea to participate was grounded in his Catholic faith and desire to really do something worthwhile in conjunction the Madison to Chicago run. After weeks of thought and consideration, it occurred to him: “Why not run the relay carrying prayer intentions along the 188-mile route?”
Fean presented the idea to a few local Catholic runners and the idea gained “legs,” piquing the interest of a several of young men in his St. Vincent de Paul, Fort Wayne, parish. Father Dan Scheidt, an accomplished runner and pastor of the parish, joined the group, and soon Fean was captain of a group of 12 men committed to the run. 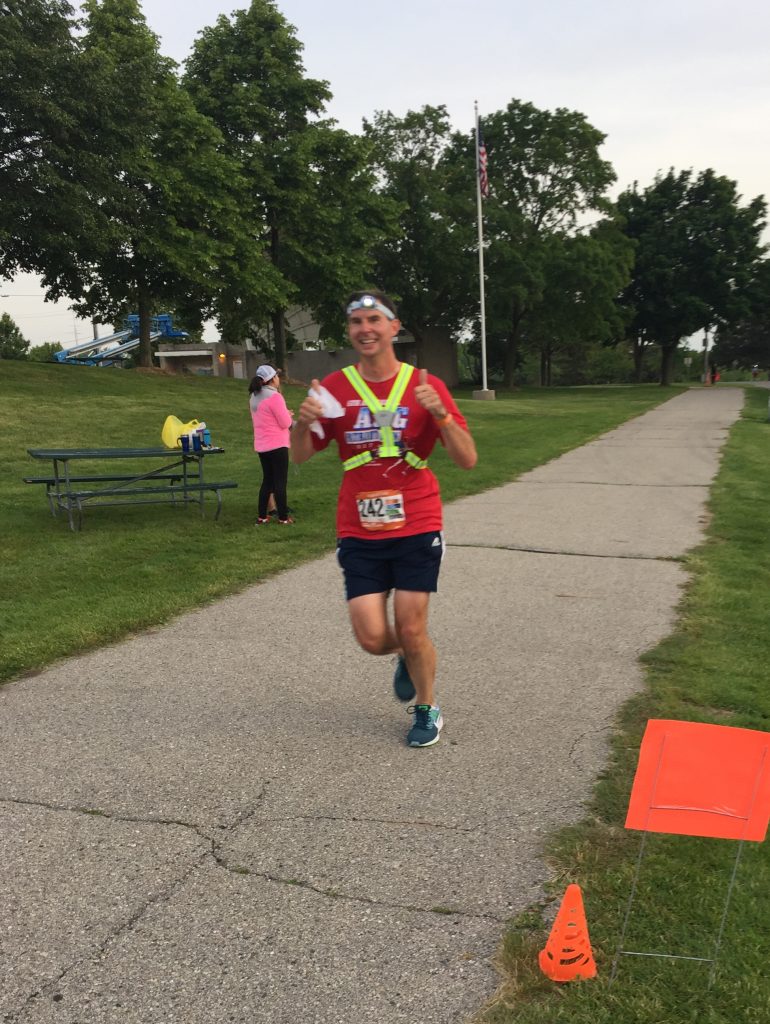 Father Daniel Scheidt, pastor of St. Vincent de Paul Parish, Fort Wayne, and a member of the Disciples on the Run team pushes through one of his designated stretches during the Reebok Ragnar Chicago Run in June. Father Scheidt and 11 other members of the team ran the 188-mile relay race while praying for 1,000 submitted prayer intentions.

The group’s mission became to gather prayer intentions from neighbors and parishioners, which would be carried along on the route. While running in relay fashion, the participants would focus on prayer intentions as they made their way through the trails, streets and roads of southeast Wisconsin and northeast Illinois. A name for the group also evolved: ”Disciples on the Run,” which seemed fitting for 12 men volunteering for prayerful running in support of a Christian mission.
As early June drew near, meetings were held to cement the team’s plans. Donations came to include the use of two vans as support vehicles and team T-shirts, both of which were decorated with arrows, a symbol of St. Sebastian, the patron saint of athletes. Prayer intentions also poured in. The team sensed real spiritual support in meetings as the event drew close. Hundreds of prayer requests were in hand by the time the two vans of six runners each headed north to Madison.
Thursday evening, June 8, Father Scheidt led the team in a Mass asking for safety and for God’s blessing on the endeavor. The Disciples on the Run found comfort in Isaiah 40:31: “But those who trust in the Lord for help will find their strength renewed. They will rise on wings like eagles; they will run and not get weary; they will walk and not grow weak.” The verse served as a focal point for the entire event, from the planning stages until the end.
Friday morning at Warner Park in Madison, the event commenced. Logistics of the relay dictated that the vans be numbered 1 and 2: “Van 1, runner 1” started the relay and ran an allotted number of miles, eventually relaying the responsibility for both the running and the praying to the “Van 1, runner 2” participant and so on. The six runners from Van 1 each took their turn during the first five exchanges, and at exchange No. 6 Van 2, runner 1 began a repeated endeavor in fashion. Runners ran through the night and in high temperatures during the 28-hour event, and each runner ran three times. Some ran and prayed along the waterfront, some ran and prayed along country roads. Some felt great; others did not, but they persevered in both.
The Disciples on the Run carried a thousand prayers through the day and night along the 188 miles. The unique nature and mission of the team also provided for opportunities for evangelization and fellowship along the run. It was an event that the participants will cherish and remember for years to come, they said.
Fean was amazed at the community support and the number of prayers the team felt honored to carry. “As we were putting our team together, I had to turn some away because we had our 12 runners. This made me think we could have multiple teams in the future,” he said. Anyone discerning the possibility of future races can contact Fean at [email protected]