By Chaz Muth and Jose Montoya

WASHINGTON (CNS) — James Senson grew up in the Virginia Beach, Virginia, area in the 1980s and his exposure to music in his home parish sounded remarkably similar to the tunes played on popular radio stations in the region.

“You know, there was nothing really special about the music, nor did it really say something about the Church to me in it,” said Senson, a Filipino-American who’s had a passion for music since he was a child.

Senson had drifted away from religion by the time he was a college-age adult, but his love of music flourished.

When he discovered Gregorian chant near the turn of the century, he was inspired to reconnect with the Church.

“This music was so different and mysterious to me,” Senson told Catholic News Service during a recent interview. “It was telling me something. It was leading me somewhere.” 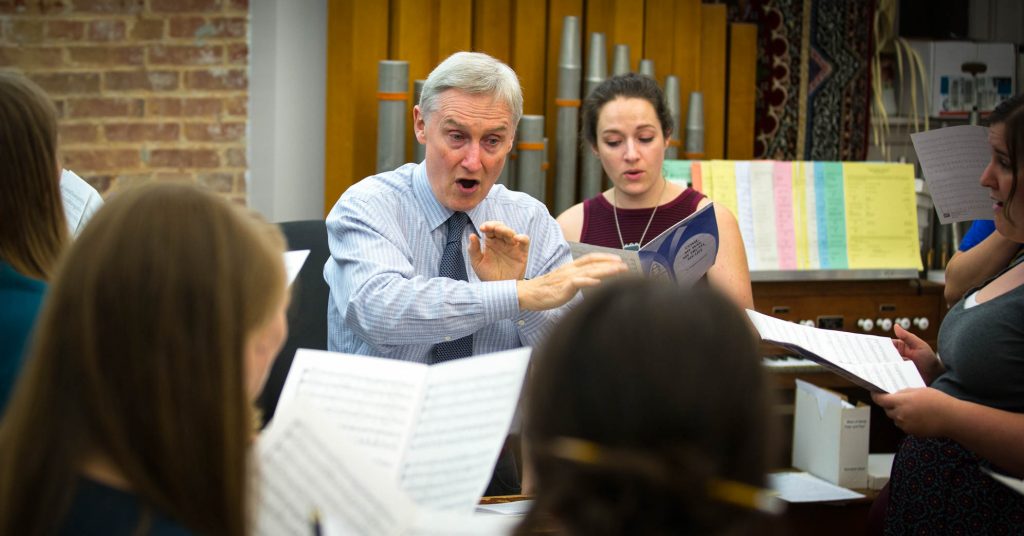 Thomas Stehle, director of music ministries at Washington’s Cathedral of St. Matthew the Apostle, conducts a Sept. 20 Gregorian chant rehearsal of the cathedral’s Schola Cantorum. Gregorian chant is the singing of the liturgy and its texts are almost entirely scriptural. (CNS photo/Chaz Muth)

It eventually led him to Catholic music ministry. The 33-year-old is now music director at St. John the Beloved Catholic Church in McLean, Virginia, a parish community where Gregorian chant is the principal sound.

This church community is unique in that the ancient sounds of Gregorian chant are deeply woven into its fabric, interlaced in every Mass, every choir and the education of the students in the parish school.

Church leaders at St. John the Beloved made the bold decision in 2005 to switch its music from the praise and worship genre to sacred music featuring Gregorian chant, decades after the practice fell out of favor following the Second Vatican Council.

It turns out that parish is part of a growing trend in American Catholic culture in which Gregorian chant is slowly being re-embraced.

That movement began following the success of a 1990s album titled “Chant,” recorded by the Benedictine monks of Santo Domingo de Silos, Spain, said Timothy S. McDonnell, director of the Institute of Sacred Music at The Catholic University of America.

That was a turning point for some Church officials who recognized the music had intrinsic value, he said. “That this is our proper music for our liturgy. That movement of recovery of this material I think started at that point when it was recognized more broadly as a tremendous treasure.”

Young Catholics — intrigued by the chant famous for its long melodic lines where several notes are sung on one syllable — began asking questions about the music, its history and how it enhances the liturgy, Turkington told CNS.

Turkington discovered that Gregorian chant was an effective tool in teaching children the importance of sacred music in the Church.

“If you give Gregorian chant to kids, they love it,” Turkington said.

With the help of the leaders of his parish, Turkington opened a summer camp in 2014 at the church dedicated to introducing youngsters to Gregorian chant.

Additionally, Turkington hosts a weeklong session for high schoolers, teaching them how to read chant notation and perform a concert at the end of the educational program at Holy Family.

He and other members of the Church Music Association of America continue to uphold the value of traditional music by actively teaching it to others.

Every year the association hosts a symposium that invites priests, musicians and choristers to immerse themselves in Gregorian chant.

Turkington was among the workshop leaders in St. Paul, Minnesota, last June.

The 250 conference attendees learned ways to teach Gregorian chant in their parishes. Turkington believes it is important for those participants to “go home and improve the liturgies of their own parishes.

The growing number of conferences and camps throughout the U.S. dedicated to Gregorian chant leads McDonnell to believe there is a bright future for the music in American Catholic Church communities.

Though documents from Vatican II are supportive of the use of Gregorian chant, church leaders in the 1970s faced difficulties in incorporating the music — all written in Latin — in a Mass that was now celebrated in the dominant language of the culture, he said.

The natural response was to adopt music in the native language, McDonnell said, much of which came in the form of genres popular in the culture.

Gregorian chant also was seen as something that was old at a time when liturgical reforms from Vatican II were transforming the Mass into something new, he said.

Senson said he understands the reasoning for implementing new musical styles in the Mass that fit that particular generation of Catholics.

However, in his view, what these parishes accomplished was generating music that sounded dated a decade later and wasn’t uniquely Catholic.

“You could walk into any Protestant church and hear the same kind of music,” Senson said. “When you hear Gregorian chant, you know you are hearing something connected to the ancient church and it’s timeless. It’s not dated, because it’s the music of the Catholic Church.”

Gregorian chant today isn’t just limited to Latin. During the course of the past few decades, composers have scored English arrangements and compositions in other languages, McDonnell said.

“There’s been a flowering of publication of English-language version of Gregorian melodies and changes that have emerged over the years,” McDonnell said. “Even if you are not using the original Gregorian chant in Latin, there is some sense of the chant style and the sacred nature of chant is being recaptured.”

Catholics now are used to hearing the Mass celebrated in their native tongue, Turkington said.

“Latin is not in the ears of (today’s) average man and woman who go to Mass on Sunday,” he said. “If you’re from France, you want to hear Mass in French. If you are from Colombia, you want to probably hear Mass in Spanish.”

The increased popularity of the chant in recent years has extended beyond the Catholic Church, McDonnell said. “There are people who don’t really have a connection to the institutional Church, but who find Gregorian chant as attractive.”

The appreciation of the chant’s beauty is more than just the resonances of the music, but resides in the text, which are prayers, Scripture and liturgy essential to the Mass, Turkington said.

“If the music in the church is really appropriate and mysterious,” he said, “the texts of the Gregorian chant … are really substantial.”