VATICAN CITY (CNS) — With the number of priests and religious dying from coronavirus-related illnesses rising, Pope Francis offered his prayers for those who died after being infected helping COVID-19 patients and their communities.

At least 50 priests, four nuns and at least 24 doctors have lost their lives and 5,000 health care workers in Italy were known to be infected as of March 24 because of the pandemic.

At the start of his morning Mass March 24, the pope said he was aware of the growing number of doctors, nurses and priests who have died after becoming infected while being “at the service of the sick.”

“Let us pray for them and their families. I thank God for the heroic example that they have given us in their care for the sick,” he said.

Archbishop Cesare Nosiglia of Turin told his priests in a letter they are called to a ministry in some ways similar to that of doctors, nurses and psychologists.

“The people turn to you with trust and hope, seeking help or even just a word of support, of accompaniment,” he wrote. 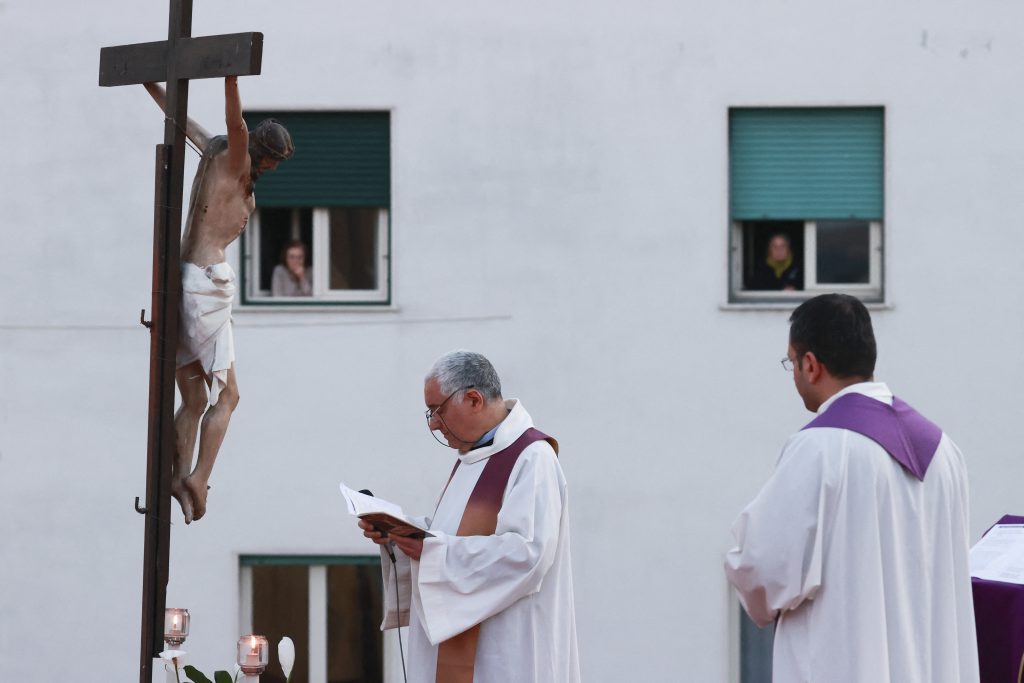 Two priests stand in front of a crucifix as they celebrate the Via Crucis (Way of the Cross) from the roof of their church, Santa Maria della Salute in Naples, Italy, March 20, 2020. (CNS photo/Ciro Napolipress, Fotogramma/IPA/ABACAPRESS.COMNo via Reuters)

Recognizing the difficulties and restrictions placed upon them for the safety of themselves and others, the archbishop said they were still shepherds, and Jesus teaches that when confronted by a wolf, a good shepherd “is not afraid and does not run away like a mercenary, but defends his flock.”

The Diocese of Bergamo website has a page dedicated to commemorating the more than 20 priests who have died after March 6.

Meanwhile, the Italian bishops’ conference daily newspaper, Avvenire, has a special section online paying tribute to the many deceased priests — with photographs and biographical details — using the hashtag #pretipersempre or #PriestsForever. After the worst-hit Diocese of Bergamo are the other northern dioceses like Milan, Parma, Cremona and Brescia.

At least three bishops, retired and active, were still being hospitalized, in quarantine or isolation for either testing positive or having contact with a person known to be positive, Avvenire reported March 18.

Dozens of priests have tested positive for the coronavirus, and some were in serious condition, it said. The number of religious men and women was still being tallied, it said, with at least four men and four women having died as of March 20.

Entire communities of women religious have been infected or are in quarantine or isolation.

In the northern city of Tortona, four members of the Little Missionary Sisters of Charity died and at least 20 were hospitalized; near Rome, in Grottaferrata, tests were conducted on members living in the motherhouse of the Daughters of St. Camillus, resulting in 59 sisters testing positive as well as one security guard. Local health authorities will be monitoring them as they remain isolated in their community, which also houses students and older nuns.

In another community in Rome, the Congregation of the Angelic Sisters of St. Paul, 19 of its 21 members tested positive for the coronavirus.

The cardinal brought fresh milk and yogurt produced by dairy cows at the papal villa of Castel Gandolfo. The same products were also donated to the John XXIII retirement home run by the Sisters of Charity Association; its residents were also put under quarantine after two health care workers tested positive.