MAPUTO, Mozambique (CNS) — When Jesus told his disciples to love one another and pray for their enemies, he meant it — even disciples in a nation like Mozambique, where political tensions have led to violence, war and death, Pope Francis said.

The pope ended his visit to Mozambique Sept. 6 with a visit to a health center founded to care for people living with HIV/AIDS and with a Mass nearby in Maputo’s Zimpeto Stadium, where a late winter rain fell intermittently.

Bernadete Silva Fungalane came to the Mass from the Diocese of Pemba, in the northern Cabo Delgado province, where outbreaks of violent killings and pillaging have terrorized the population for the past few years.

Wearing a headwrap and a skirt made of blue fabric with the pope’s image, she told Catholic News Service that the pope “can help stop the violence, first of all because he unites people. His words about reconciliation are very important for our people.” 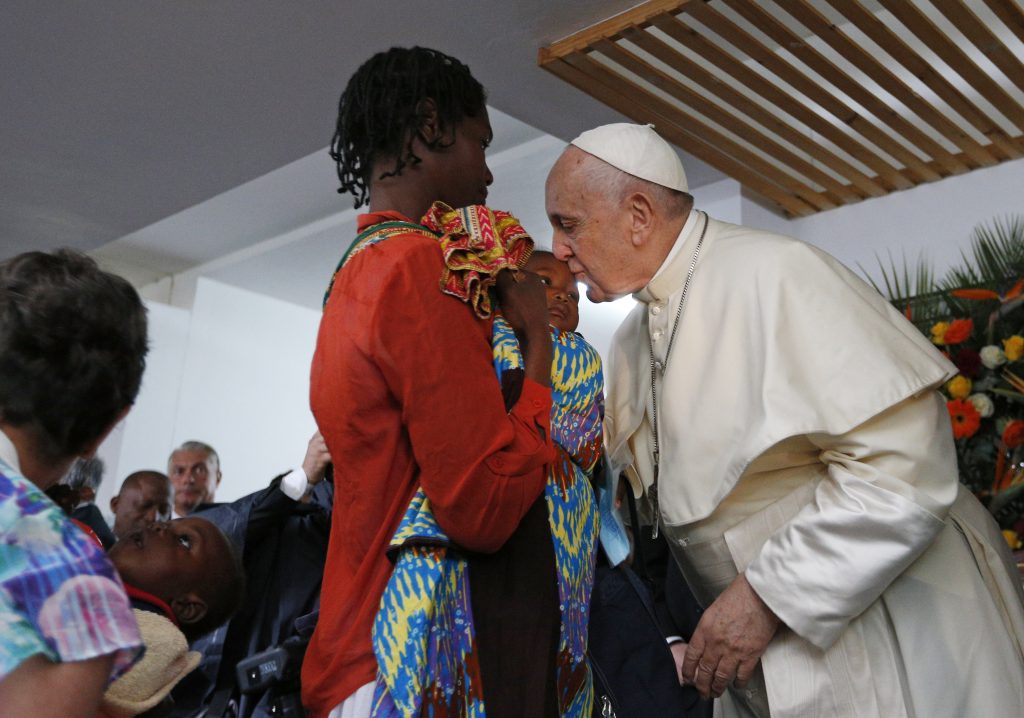 Before the recitation of the rosary began 90 minutes before the pope’s arrival, Silva Fungalane said, she knew in her heart that she would receive a blessing being at Mass and “all Mozambique will be blessed.”

In his homily, Pope Francis insisted Jesus’ message about love and turning the other cheek was not simply a lovely platitude, but a call to courage and strength and trust in God alone.

Jesus “is talking about specific enemies, real enemies, the kind he described” in the beatitudes: “those who hate us, exclude us, revile us and defame us,” the pope said.

Pope Francis said he knows people are frightened of renewed violence, and he made special mention of Cabo Delgado.

A true and long-lasting peace, he said, can be achieved only through reconciliation, which requires meeting with, speaking to, trying to understand and praying for those who had been enemies.

“Jesus wants to end forever that common practice of being Christians yet living under the law of retaliation,” the pope said. “We cannot look to the future, or build a nation, an equitable society, on the basis of violence. I cannot follow Jesus if I live my life by the rule of ‘an eye for an eye, and a tooth for tooth.’”

Pope Francis also used the occasion to condemn corruption, especially because it has kept so many Mozambicans in absolute poverty, despite the country’s natural resources. The pope did not mention specifics, but Mozambicans are still paying the price for a massive loan and bribery scheme that was revealed in 2016 and led to the suspension of international development funding.

With general elections scheduled for Oct. 15, the pope told people to look for those who show “concern for others, acknowledging and appreciating them as our brothers and sisters, even to the point of identifying with their lives and their pain.”

Before arriving at the stadium, Pope Francis paid a visit to the Zimpeto DREAM Center, a medical clinic sponsored by the Rome-based Community of Sant’Egidio, but now fully staffed by Mozambican doctors, nurses and laboratory technicians. Sant’Egidio, a lay movement, helped mediate the Mozambique peace talks in the early 1990s and, when the AIDS pandemic began, the community mobilized to help.

Some 20 percent of Mozambican adults are HIV positive and, in 2002 when the first DREAM Center opened, mother-to-baby transmission of the virus was commonplace. Sant’Egidio decided to start there, giving the women antiretroviral drugs at no cost, as well as providing them and their families with food assistance. The program boasts of more than 100,000 babies being born virus free.

Pope Francis met several of those newborns, offering a big smile to the proud mothers and gently stroking the chubby cheeks of the babies.

In a brief speech, the pope praised the program for listening to the needs of those suffering before designing the program and for always treating the patients with dignity. It was essential, he said, that someone hear “the silent, almost inaudible, cry of countless women, so many of them living in shame, marginalized and judged by all.”

Now those same women have formed an association where they support one another and go into their communities to educate other women about HIV/AIDS and accompany those being tested for the virus.

After the Mass, Pope Francis traveled to Madagascar, the second stop on his three-nation Africa visit. He also was scheduled to visit Mauritius before returning to the Vatican Sept. 10.