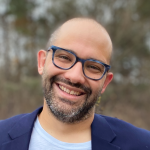 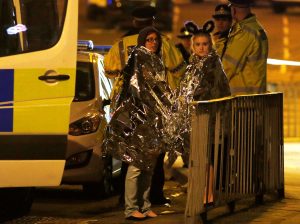 Two women wrapped in thermal blankets stand near Manchester Arena in England where U.S. singer Ariana Grande had been performing May 22. At least 22 people, including children, were killed and dozens wounded after an explosion at the concert venue. Authorities said it was Britain’s deadliest case of terrorism since 2005. (CNS photo/Jon Super, Reuters) See MANCHESTER-ARENA-REACT May 23, 2017.