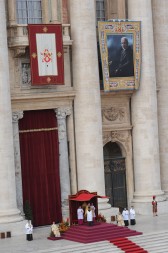 Pope Benedict XVI declares Blessed André Bessette a saint of the Catholic Church with the banner of Brother André above the entrance of St. Peter’s Basilica in Rome.

Calls them ‘shining examples’ of holiness

VATICAN CITY (CNS) — Pope Benedict XVI proclaimed six new saints, including an Australian nun and a Canadian brother, calling them “shining examples” of holiness and the power of prayer.

Canadians cheered the canonization of Holy Cross Brother Blessed André Bessette, 1845-1937, a doorman known for his devotional practices and his healing touch. He became known as the “Miracle Man of Montreal.”

The pope said St. Bessette “showed boundless charity and did everything to soothe the despair of those who confided in him.” Although he had little instruction, he “understood what was essential to the faith” and had an intense prayer life, the pope said.

“For him, everything spoke of God and his presence,” the pope said. Thanks to this simplicity, St. Bessette led many people to God, he added.

“His great devotion to St. Joseph,” Father Warner said, “led him to accomplish what was thought to be impossible — beginning the construction of a great shrine to St. Joseph in Montreal, Canada. Through his pastoral attention to those who sought his intercession for spiritual and physical challenges, many people were cured by the ‘Miracle Man of Montreal.’” 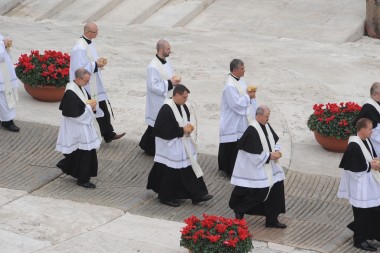 Holy Cross priests, wearing black capes, process off the altar before giving the Holy Eucharist to the pilgrims.

Father Warner added that over 1 million people attended his funeral, and today, more than 2 million pilgrims visit St. Joseph Oratory each year. “We invite our colleagues and friends to join us in our joy as we celebrate this extraordinary moment in the life of our congregation,” he said.

Holy Cross Father David Tyson, provincial of the Indiana Province of Priests and Brothers, said, “We are honored and moved beyond words at Brother André’s formal recognition as a saint, not only because this immensely humble man is the congregation’s first recognized saint, but because he is such an extraordinary example for every Catholic of every age.

“Not for him the trappings of power and status, of money and prestige; he was famous first as a ferociously hard worker at the high school where he served his whole life,” Father Tyson added. “He simply did everything and anything that was needed, from cleaning the floors to fixing shoes, from doing students’ laundry to cutting hair. What an example of prayer in action, of active service to others as the most eloquent and powerful prayer of all. And that is the essence of the Congregation of Holy Cross — we serve the Christ in every being, with our hands and hearts and souls, with all our might.”

Holy Cross Brother Chester Freel, provincial for the Midwest Province of Brothers at Notre Dame, said, “Throughout our 190 years of existence, the Brothers of Holy Cross have demonstrated their love for God by doing His work simply and humbly. Today, this canonization ceremony, I am very excited and proud that one of our own, Brother André Bessette, CSC, was canonized as the first saint of the Congregation of Holy Cross.”

He added, “Like all of us, St. André lived a simple life, followed his vows, and performed the tasks that were given to him by the congregation. His life’s work was to be the doorkeeper and porter for Notre Dame College in Quebec. He performed this work with such devotion and grace that people began to come to the college just to visit Bother André. He would greet them with friendship and anoint them with oil from the chapel lamp, which always burned before St. Joseph’s statue. Then he would pray that St. Joseph intercede for his visitors. As time went on, many miraculous healings were attributed to the friendly doorkeeper, but Brother André was always clear that the credit be given to St Joseph.”

Brother Freel said, “Now with his canonization, we can pray directly to St. André, CSC, of Montreal, for he demonstrated through consistent acts of hospitality and constant attention to prayer that sainthood can be found in living out the two greatest Commandments: ‘Love God above all else and love thy neighbor as thyself.’ In this way Brother André serves as a role model to all seeking holiness. And as members of the same religious community, we pray that the witness of Brother André’s life, his holiness, and his trust in the intersession of St. Joseph, will continue to be a source of inspiration and affirmation, as we follow in his footsteps as consecrated religious of the Congregation of Holy Cross.”

Canadians in the square spoke warmly of St. Bessette; some of the pilgrims even had personal connections to him.

Diane Guillemette of Montreal said that when her mother was 16 years old “she had a problem with her ear and she went to Brother André and he healed her.” Guillemette called St. Bessette “an example of patience, humility and love of work.”

One of 12 children, St. Bessette suffered from a chronic stomach ailment that kept him out of school. His father and mother died when he was young.

When he entered the Congregation of Holy Cross in 1870, his childhood parish priest, Father André Provencal, sent a letter to the novice master saying, “I am sending a saint to your congregation.”

Others canonized
Thousands of pilgrims from Australia applauded and waved their national flags after the pope pronounced the formula of canonization Oct. 17 in St. Peter’s Square for Blessed Mother Mary MacKillop, who educated poor children in the Australian outback in the late 19th century. She became the country’s first saint.

In his homily, Pope Benedict said St. MacKillop, 1842-1909, was a model of “zeal, perseverance and prayer” as she dedicated herself to the education of the poor in the difficult territory of rural Australia, inspiring other women to join her in the country’s first community of religious women.

“She attended to the needs of each young person entrusted to her, without regard for station or wealth, providing both intellectual and spiritual formation,” he said. Her feast day is celebrated Aug. 8.

Relics of the six saints were brought to the altar during the two-hour liturgy. Tapestry portraits of the newly canonized hung from the facade of St. Peter’s Basilica behind the papal altar, and many pilgrims carried their own personal pictures of the saints.

The others canonized were:
• St. Camilla Battista Varano, 1458-1524, the illegitimate daughter of an Italian nobleman, had to overcome her father’s initial objections to enter the convent of the Poor Clares. Known for her mystical experiences during prayer, she died in an outbreak of the plague.

• St. Stanislaw Soltys, 1433-1489, who devoted his life to caring for the poor in his native Krakow, Poland. Famed as a preacher and confessor, he was known as the “Apostle of the Eucharist” for his taking Communion to the sick and lonely.

• St. Giulia Salzano, 1846-1929, taught catechism to schoolchildren near Naples, Italy, and later founded the Catechetical Sisters of the Sacred Heart of Jesus to continue her work, which offered religious education to children of all ages, to their mothers and to regular laborers.

• St. Juana Cipitria Barriola, 1845-1912, was a champion of education for girls and young women in her native Spain. Known in some countries as Mother Candida Maria de Jesus, she founded the Daughters of Jesus with five other young women. She ran a special school on Sundays for girls who were employed as domestics, because Sunday was their only day off.

In his homily, the pope said the new saints exemplified the effectiveness of prayer as an expression of faith.

“Sometimes we get tired of praying, we have the impression that prayer is not very useful in life, that it is not terribly effective. So we are tempted to dedicate ourselves to activity, to using all human means to achieve our aims, and without turning to God,” he said.

The canonization brought some 8,000 Australian pilgrims to Rome, where Australian flags waved in abundance during the papal liturgy.
St. MacKillop, the oldest of eight children of Scottish immigrants to Australia, began at the age of 24 to work with a priest to provide free education to the rural poor of the country. Three years later, there were 60 sisters working in schools, orphanages and women’s shelters.

The nuns were also committed to following poor farmworkers, miners and other laborers into remote areas of the country to educate their children.

Local Church officials, however, disapproved of the sisters living in tiny, isolated communities — sometimes only two to a hut — frequently cut off from the sacraments in the remote Australian outback. She was even briefly excommunicated by the local bishops, who disbanded her order, the Sisters of St. Joseph of the Sacred Heart. But within a few months, the bishop lifted his censure, and a Church commission cleared the sisters of all wrongdoing.

In 1901, she suffered a stroke during a trip to New Zealand, and her health declined until her death in 1909.