By Elizabeth A. Elliott

ALEXANDRIA, Va. (CNS) — The last time Poor Clare Sister Rose Marie of the Queen of Angels hugged her mom or other family members was in 1994 when she made her solemn profession of vows to her religious order.

In June, when she renewed her solemn vows, more than 120 friends and family gathered to greet her at the Poor Clare Monastery of Mary, Mother of the Church in Alexandria. It was the first time she hugged many of her nieces and nephews.

“It was such a joy for all of us to celebrate this milestone in our sister’s life. For someone to persevere for 25 years in a hidden life of prayer and penance is a proof of God’s grace,” said Abbess Mother Miriam Love.

“It helps confirm all of us in our vocation to serve the Church with our prayer and with our lives,” she told the Arlington Catholic Herald, newspaper of the Diocese of Arlington. 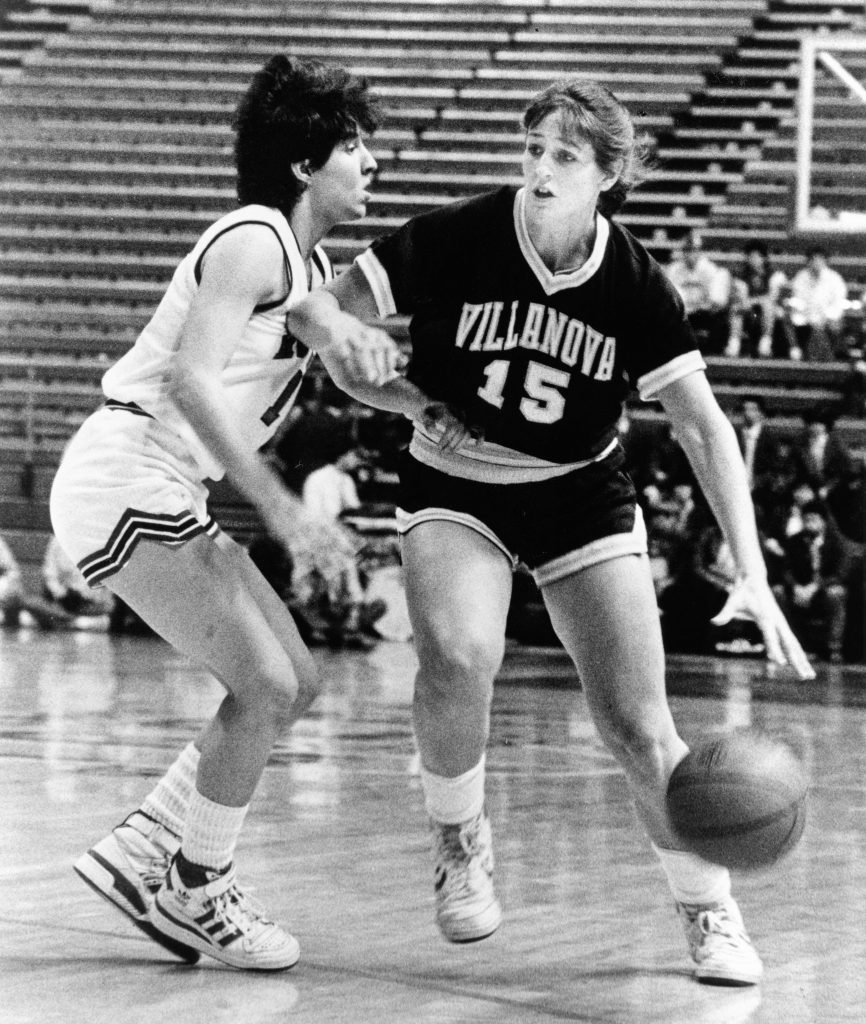 Before entering the convent, Sister Rose Marie, known as Shelly Pennefather, was a basketball star — in Catholic high school and during her college career at Villanova University in Pennsylvania. She played three seasons of professional basketball for the Nippon Express in Japan after graduating from Villanova.

Her skills on the court got a mention from Arlington Bishop Michael F. Burbidge during his homily at the Mass he celebrated on Pentecost, June 9, when Sister Rose Marie celebrated her silver jubilee and renewed her vows.

“Having so many opportunities in front of her for a successful and professional career in basketball and to cling to what the world deems necessary for happiness, the Spirit of God proved to be more powerful than such allurements,” Bishop Burbidge said.

“(This) allowed Sister Rose Marie to hear and to respond to God’s voice inviting her to a radical new way of living in his presence within a community of sisters devoted entirely to the Lord and dedicated to prayer for his Church and his people,” he said.

Sister Rose Marie “asks for the grace to be strengthened in faith, hope and love and to persevere faithfully in her consecration,” Bishop Burbidge said in his homily. “Together, we ask God ‘to send the fire of the Holy Spirit into the heart of his daughter that she may always be one with him in loving fidelity to Christ, her bridegroom.’”

He added: “How blessed we are as her sisters, family members and friends to participate in this sacred liturgy and to thank God for the gift that Sister Rose Marie has been and remains to the Church and to each one of us. I am sure that at the conclusion of this ceremony, we will all be able to say, ‘There was no doubt that the Holy Spirit was here today.’”

After the homily, Sister Rose Marie came to the open communion doors to the right of the altar and renewed her vows.

After Bishop Burbidge asked her what she asks of God and the Church, she replied, “I ask for the grace to renew my solemn vows, to be strengthened in faith, hope and love, and to persevere faithfully in my consecration.”

Then, one by one, 40 to 50 members of her family extended the sign of peace.

As Shelly Pennefather, her basketball career took shape during three years at Bishop Machebeuf Catholic High School in Denver. She led Machebeuf to three consecutive state championships and a 70-0 record. When her family she moved, her final year of high school was at Notre Dame High School in Utica, New York. She led Notre Dame to a 26-0 record, making for a no loss record for her entire high school career.

Pennefather was named to the Parade All-American High School Basketball Team. She was a U.S. Olympic Festival selection in 1981 and 1983. She turned out for the USA Women’s R. William Jones Cup Team in 1982 where she earned a silver medal.

Records she set at Villanova University (1983-87) include becoming the school’s all-time leading scorer for both men and women with 2,408 career points; and the program’s all-time leading rebounder with 1,171 rebounds. She received the Wade Trophy in 1987, given to the top player in NCAA Division One women’s basketball, and is one of six Villanova women’s basketball players to have her jersey retired.

During her off-seasons as a professional player with the Nippon Express, she volunteered at St. Teresa of Kolkata’s Missionaries of Charity mission in Norristown, Pennsylvania. She retired from basketball and entered the Poor Clare convent in 1991.

Elizabeth A. Elliott is a staff writer at the Arlington Catholic Herald, newspaper of the Diocese of Arlington.