The Indiana legislature passed a bill in 2017 that required women to undergo an ultrasound at least 18 hours before having an abortion. Planned Parenthood of Indiana and Kentucky was successful in asking for an injunction that prevented the law from being implemented, however; the organization claimed the law was unconstitutional and would prevent some women from getting abortions, especially low-income women who would be forced to travel to clinics located farther away because not all Planned Parenthood offices have ultrasound equipment.

The concession was the result of Planned Parenthood’s decision to offer the ultrasounds required by law at a clinic in Fort Wayne that no longer offers abortion procedures.

According to the attorney general’s statement, the concession made clear that if anything threatened women’s ability to obtain abortions, it was Planned Parenthood’s own business decisions, not the challenged law — “an argument that the State made all along.”

After the federal district court and court of appeals upheld a preliminary injunction against Indiana’s law, the U.S. Supreme Court on July 2 vacated the federal appeals court’s decision and sent the case back for further consideration in light of another recent U.S. Supreme Court precedent, June Medical LLC v. Russo.

“I’m pleased that Planned Parenthood saw the likelihood that this very reasonable law ultimately would be upheld,” Hill said. “To their credit, they recognized the merits of avoiding further legal wrangling over this matter.”

Lisa Everett, director of the Ministry for Marriage and Family in the Diocese of Fort Wayne-South Bend, said Catholics and Right to Life proponents in Northern Indiana were uplifted by the decision.

“We are heartened that Planned Parenthood has decided to drop its federal lawsuit against an Indiana statute requiring women to receive an ultrasound at least 18 hours before having an abortion,” she said Friday morning. “Ensuring that women are presented in a timely manner with all of the facts about the decision they face — including a real-time image of their child in the womb — is not only reasonable, but also an issue of justice for both mother and child. Hiding the truth about a matter so important serves the well-being of no one. We are proud that the state of Indiana leads the way in requiring truly informed consent before such a life-or-death decision.” 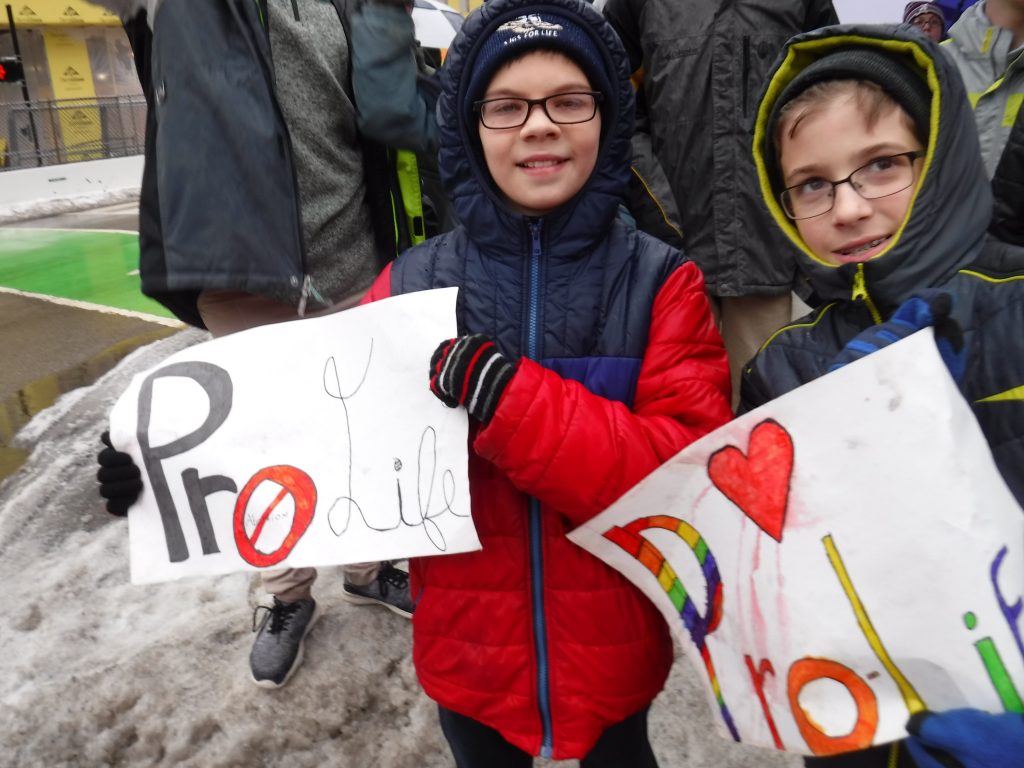 Jennifer Miller
Young people in South Bend voice their pro-life beliefs during a local March for Life in January. Pro-life advocates in the Diocese of Fort Wayne-South Bend were uplifted Aug. 20 by the defeat of an injunction brought against the state, which prevented a 2017 law from being implemented: The law requires an ultrasound at least 18 hours before a woman undergoes an abortion.

Lucy Papaik, a member of Immaculate Conception Parish in Kendallville and part of the core team of a newly formed Right to Life group in Noble County, described her reaction to the decision as “excitement.”

“It was an answer to prayer. Glory to God … We’re here to help our brothers and sisters to understand the decision they’re making when they decide to have an abortion — that there’s life there, it’s not just a mass of cells. And it’s another step toward reversing Roe v. Wade.”

Following the concession, Planned Parenthood stated publicly that it will continue to fight other threats to abortion access in the state, which ranks second nationally in terms of restrictions.

Indiana’s law is rooted in respect for women’s health and the sanctity of human life, concluded Hill’s statement.

“For women considering abortions, ultrasounds are an important part of informed-consent counseling. Anyone interested in protecting women’s health, including their mental health, should support giving them as much information as possible to aid their decision-making. Empowering women with knowledge is fully consistent with the U.S. Constitution.”