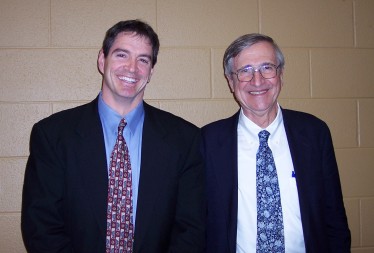 GRANGER — Philosophy Professor Peter Kreeft has given many pro-life talks, but the topic he addressed on Oct. 14 at St. Pius X Parish — how to change people’s minds about abortion —was a first for him. The Boston College and Kings College professor nevertheless embraced the topic because, he said, “I like hard questions.”

That “hard question” was put to him by the local organizers of the 40 Days for Life fall campaign. The 40 Days for Life is a national movement to pray, fast and witness for an end to abortion. Its fall campaign started Sept. 28 and runs through Nov. 6, and Kreeft’s talk at St. Pius X Parish Center marked the half-way point of this fall’s campaign.

Kreeft said that his topic was a “hard question” because people aren’t simple, and life itself is spiritual warfare involving a conflict of ideas, spirits, souls, persons and supernatural persons. Yet, Kreeft observed, if even one person got one idea from him to put into practice, the lifesaving potential would be enormous.

“If one person on one occasion will change one person’s mind about getting an abortion, and therefore that one baby will be saved, will grow up and get married and have kids, and they’ll have kids … and who knows … you might save millions of lives tonight if I happen to mention one practical thing.”

Rather than deal with abstract ideas, pro-life supporters have to ask the question “What is abortion?” Kreeft said. This question is especially difficult and threatening for pro-choice people, for it forces them to look at the reality of what it is they are aborting, he explained.

In addition to this “practical logic,” Kreeft said pro-life people must also realize that physical and mental wounds are present in the minds of pro-choice people.

Women are instinctively geared toward having babies, he continued, and those who choose abortion do so out of fear. Unwanted pregnancy almost inevitably causes confusion and uncertainty, and most women later regret their abortion, he said, but the pro-choice side doesn’t tell women that fact.

Pro-life people can try to lessen women’s existing fear of giving birth by showing the women alternatives, as crisis pregnancy centers do, Kreeft continued. These centers show love, and “Perfect love casts out fear,” he explained.

Kreeft added that, while one must acknowledge the fear of women considering abortion and listen to the person, one must also be honest and maintain two essential premises: It is always morally wrong to deliberately kill a human being, and abortion is wrong because it kills a human being.

Philosophers try to deny the premise that abortion kills innocent humans, Kreeft said, so they try to redefine who a human is in the same way that Hitler dehumanized Jews. One has to dehumanize the person before killing him — mental murder — before performing the physical murder, he explained.

“What terrifies me is the change in the thinking of the pro-choice community since Roe v Wade,” Kreeft said. “Almost all pro-choicers at first denied the second premise, that the fetus is a human being. Now, increasingly they’re denying the first premise — because the scientific data is very clear that the fetus is human … so they have to deny the first premise. So they say ‘It’s not always wrong to kill human beings, even though they’re innocent.’ In order to say that, you have to twist your basic moral intuitions into pretzels.”

If people think logically about abortion, they won’t remain pro-choice for long, Kreeft said, but getting people to think is the most difficult task. He then presented several strategies for changing people’s minds about abortion:

• When talking to pro-choice people, talk with absolute seriousness and show that abortion is a central issue of life and death, but don’t compromise the Christian absolutes of truth and love.

• Don’t focus on the legalities or politics. You can’t do everything at once, so focus on the concrete person in that concrete situation, for the person has a soul who will live forever.

• Take truth and love with seriousness, but respect and affirm the other person’s feelings, or you won’t get them to listen.

• Pray before and after you talk to people, realizing you are praying to our Father, who we can totally trust.

• Have patience, which leads to persistence. Patience is not weakness: “Never, never, give up.”

• Don’t require that person to change his mind, convert and admit it to you. Just hope that you plant doubts in the person’s mind so maybe he will admit to himself he has been wrong.

• Ask questions, which are less threatening than giving a lot of answers.

• Be creative and improvise, for most of life is unpredictable.

• Appeal to feminine principles: Listen to the inner woman and her intuition, and get her to realize that an unborn baby isn’t a problem to fix, but a tiny person in her care.

• Be there personally for them; make friends; sacrifice your time, your life. Actions make friends.

• Show them your kids, your babies. Every baby born into the world is made in heaven.