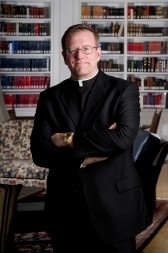 CHICAGO (CNS) — Television viewers across the country will get a glimpse into the rich history, culture and tenets of the Catholic faith this fall when 90 public television stations across the country air episodes of a series called “Catholicism” that was developed by a Chicago priest.

The series is hosted by Father Robert Barron, who runs the Chicago-based Word on Fire ministry. It includes 10, hourlong DVDs, leader and group study guides and a 300-page stand-alone book of the same title. Episodes also will be broadcast on the Eternal Word Television Network.

The priest’s goal was to show the history and treasures of the Catholic Church. The series was filmed in high-definition and spans more than 50 locations in 15 countries.

The global media ministry Word on Fire — which aims to “educate and engage the culture” — pitched all 10 episodes of “Catholicism” to PBS, but the network opted to run four shows: the revelation, God becomes man; the mystery of God; Mary, the mother of God; and Peter and Paul as missionaries. (Check local listings.)

No money was exchanged under the agreement, Father Barron said, and Word on Fire will promote the full DVD set and program at the end of each episode.

Father Barron, a priest of the Archdiocese of Chicago and a professor of faith and culture at the University of St. Mary of the Lake/Mundelein Seminary, said he was surprised PBS agreed to air “Catholicism.”

“I thought that maybe they would think it was too Catholic. They loved it right away,” he told the Catholic New World, Chicago’s archdiocesan newspaper.

The goal of “Catholicism” has always been to evangelize the culture, and media seemed the best vehicle to accomplish that, he added.

The priest also wants to reach people outside of the Catholic Church, such as fallen-away Catholics, secularists, non-Catholics and disinterested Catholics.

“That’s why I love that PBS is broadcasting it,” he said.

The program has a good chance of reaching people who are not part of the Church because it is a high-quality series done in an inviting way, said Eileen Daily, assistant professor at the Institute of Pastoral Studies at Loyola University Chicago.

“One of the biggest issues with evangelization is getting people not to put up a wall before your message gets to them,” said Daily, whose study includes using art for religious education. People will be more open to the message in “Catholicism” because it looks like the rest of the shows they are used to seeing on television, she said.