Receiving a four-year, full-ride scholarship to a Catholic university was unexpected for a young woman whose greatest desire is not to receive, but to give.

The University of Saint Francis, Fort Wayne, honored local student María Solis Dec. 12 as the winner of its Pay it Forward Scholarship to the school. A generous giver herself, Solis was stunned to be given such a large gift in return.

Following the surprise announcement at Bishop Luers High School, Solis said all her life she had been taught that “God will reward you more. I truly believe that is true, because I don’t need anything. I love to give what I give and I don’t expect anything ever. That’s why I didn’t really expect this.” 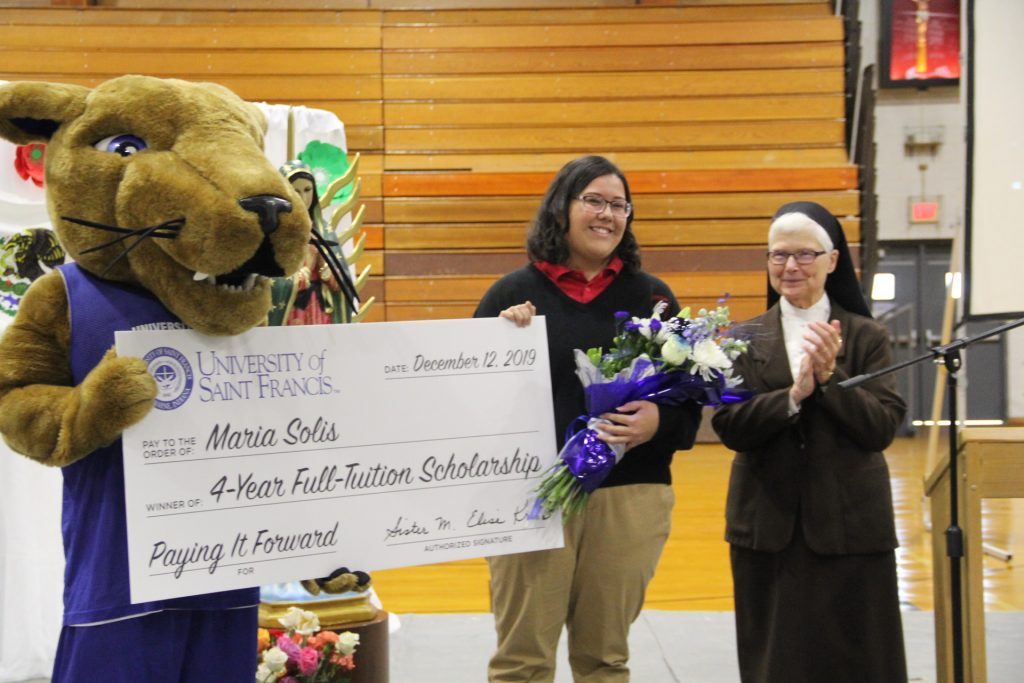 The hope of earning a scholarship was not why Solis began her life of service, however. In an essay she submitted earlier in the school year, Solis wrote about volunteering for the last two years at Community Harvest Food Bank in Fort Wayne as a way to give back to the organization that had served her family when Solis was a young girl. After being a client of the food bank she later visited it on school trips, and as soon as she was able to drive herself, she initiated the long-term commitment.

Her community involvement began even earlier, though. “What am I not involved in?” Solis asked with a laugh. She is an extraordinary minister of holy Communion at Bishop Luers and one of the leaders of the World Culture Club, which brings “a little bit of everything to school.” She enjoys learning about people and other cultures. At her home parish of St. Elizabeth Ann Seton, Fort Wayne, Solis is involved in, among other things, the Fidelis program, whose purpose is to help young women grow in lives of virtue.

Solis plans to study nursing at Saint Francis, hoping one day to serve the needs of those in poverty-stricken nations around the world.

“I get my inspiration from Mother Teresa. She went to the lowly and helped them get back up. I really hope I get the opportunity to travel to poor areas so I can be with those people that have nothing.” 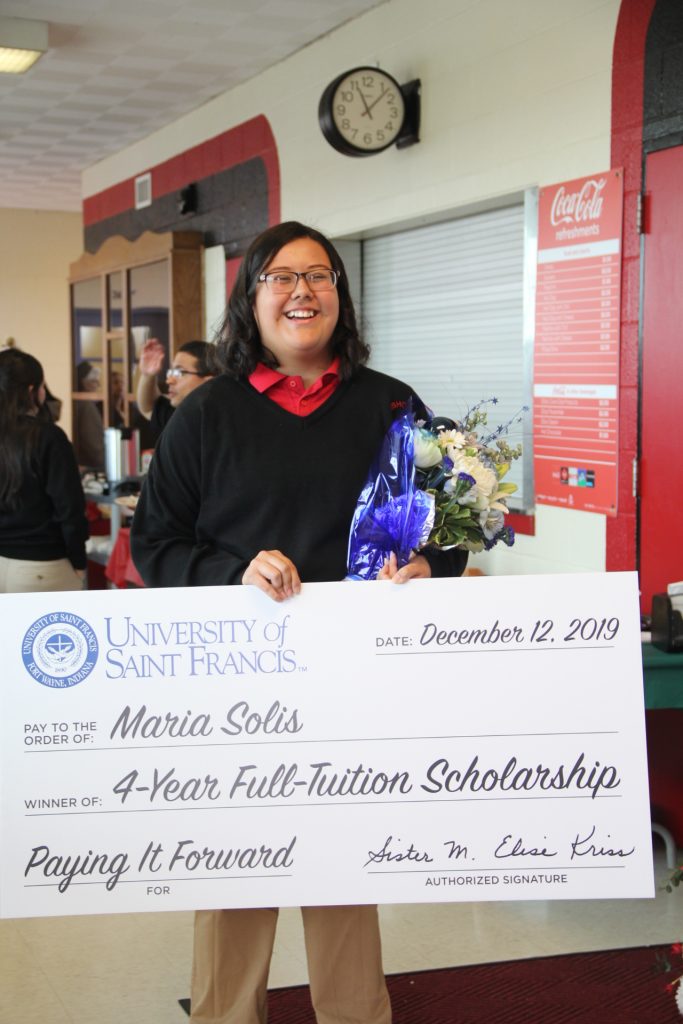 Her passion to work with the poor deepened in part through school presentations that showed the poverty experienced in underdeveloped nations, she said, along with witnessing the generous and hardworking nature of her parents.

“I love my parents. I’ve always seen that they work so hard, extremely hard, to get me where I’m at and to get me to the schools where I want to be.” Solis went through the process to become a legal U.S. citizen as a child.

Because of the cost of Catholic education, after Solis’ graduation from St. Elizabeth Ann Seton School in Fort Wayne her parents wanted to transfer her to a public high school, but Solis liked the Catholic school atmosphere in which she had grown up. She worked with her parents and Bishop Luers so that she could attend the school.

She also cites the faith she learned at home, through family prayer and lessons from her parents about generosity for her selflessness. The oldest of five children, she is a role model for her younger siblings. Over the summer, she and her younger sister spent a week at the Beauty Will Save the World retreat at Saint Francis, and both young ladies plan to attend the Diocesan World Youth Day as well.

Solis, her mother and sister share the first name of María, so at home Solis is called by her middle name of Lupe, short for Guadalupe. And it was on Dec. 12, after Mass celebrating the feast of Our Lady of Guadalupe, that Sister M. Elise Kriss, president of the University of Saint Francis, presented María Guadalupe Solis with the check for her education.

“I think, this is crazy, but I think this is my little miracle from God because I prayed so many times, ‘God, please show me where You want me to be,” said Solis. She had been interested in the Pay It Forward Scholarship, she said, but was told it would be unavailable this year due to lack of funds. About a month later, however, she learned that it would be available after all and immediately applied for it. “People cannot tell me there’s not a God, because I know there is.”

The response to seeing Solis on a big screen at Bishop Luers Dec. 12, and the announcement by WANE-TV anchor Terra Brantley of the award, was met with overwhelming applause and a standing ovation from an assembly of the student body. Solis was embraced by friends and teachers, all congratulating her on the blessing. Solis could find few words to express her extreme gratitude.

Lois Widner, principal of St. Elizabeth Ann Seton School, attended the surprise announcement in order to support her former student. She recalled how involved Solis was throughout her time at the school. “All her teachers would say the same thing. I think she will go further and become whatever she wants to become: She will help a lot of people.”

Solis wants to make a difference in the world, help others, and let the love of God shine through her life.

“I’m a people person,” she said. “I think we’re all made to love each other and help each other, no matter the race, culture and what you believe in or not. We have to show love to another person.”