Saint Joseph High School principal John Kennedy welcomed Bishop Kevin C. Rhoades for a pastoral visit on March 19, stating he could feel the presence of St. Joseph, the great saint, in the building that day. While the bishop often comes to the South Bend school on or near the solemnity of St. Joseph, this year’s visit was exceptional due to Pope Francis’ declaration of 2021 as the Year of St. Joseph.

In addition to saying Mass for the students, Bishop Rhoades led a prayer service to St. Joseph that was livestreamed and recorded from the school’s chapel on YouTube so Catholic schools throughout the Diocese of Fort Wayne-South Bend could participate. In it, Bishop Rhoades explained that, “We are celebrating a special Year of Saint Joseph because it is the 150th anniversary of the proclamation of St. Joseph as the Patron Saint of the Universal Catholic Church by Blessed Pope Pius IX.” 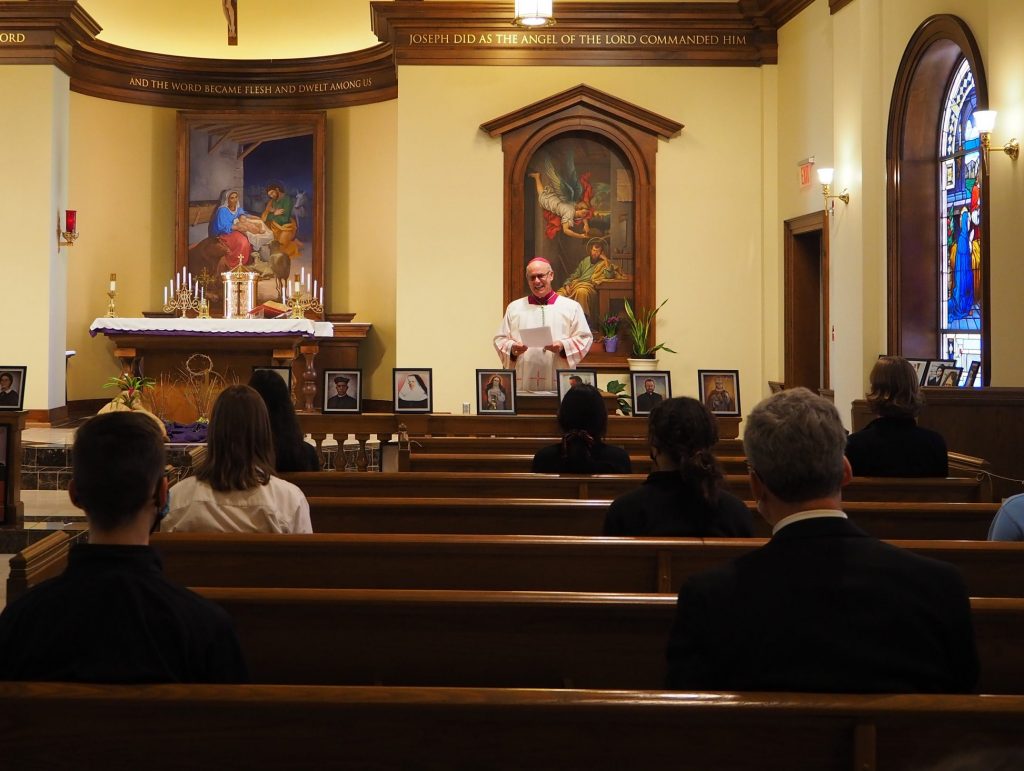 Several students joined the bishop in the school’s chapel for a prayer service to St. Joseph on his feast day, reciting the Litany of St. Joseph together. The service was livestreamed to all Catholic schools in the diocese and was also recorded in Spanish.

The bishop related that St. Joseph is recognized as the patron of the Church because of his protecting role over the Child Jesus and His mother, Mary, and for his unquestioning obedience to God. “St. Joseph trusted God’s word and was always ready to do God’s will. Mary and Joseph both teach us to have a strong faith in God and to be obedient to God’s will. They were always faithful to God’s call. They both loved and served God. They loved and served Jesus.

“That’s our call too – to have faith in God, to trust and obey God. When we do, we find joy and peace in our lives,” he said. The prayer service concluded with the Litany of St. Joseph.

Bishop Rhoades began his visit by meeting with the school’s theology teachers, then celebrated Mass for half of the student population in the gymnasium. The rest of the students remained in their classrooms and participated through the livestream.

Saint Joseph High School chaplains Father Terrence Coonan and Father Gilbrian Stoy, CSC, concelebrated. Nine students were confirmed during the Mass. Bishop Rhoades told the confirmed they would never forget the date of their confirmation because it took place on the solemnity of St. Joseph, patron of their school.

In his homily, Bishop Rhoades expounded on the virtues of St. Joseph, stating that, “We can look to him as a father and ask him to guide us and obtain for us grace, mercy and courage in our following his son, Jesus.” He spoke about the Gospel passage in which Mary and Joseph found the Child Jesus in the Temple and Mary’s anxious questioning of Him.

“Jesus said to His parents: ‘I must be in my Father’s house,’” Bishop Rhoades stated. “It was a necessity. Jesus was conscious of His identity, of His relationship with God. He must be about His Father’s business. This was central to Jesus’ life and mission on earth – to do His Father’s will, to follow His Father’s plan, which was ultimately to save us, to suffer and die for us and to rise from the dead. Jesus was not being disobedient to Mary and Joseph. He was being obedient to His Father in heaven.”

He continued by recalling for the students that Jesus did return to Nazareth with His parents and was obedient to them, learning many skills from St. Joseph.

“Joseph was a tender and loving father. In Joseph, Jesus saw the tender love of God the Father. When we pray through the intercession of St. Joseph, we can approach him as a loving father to us.” 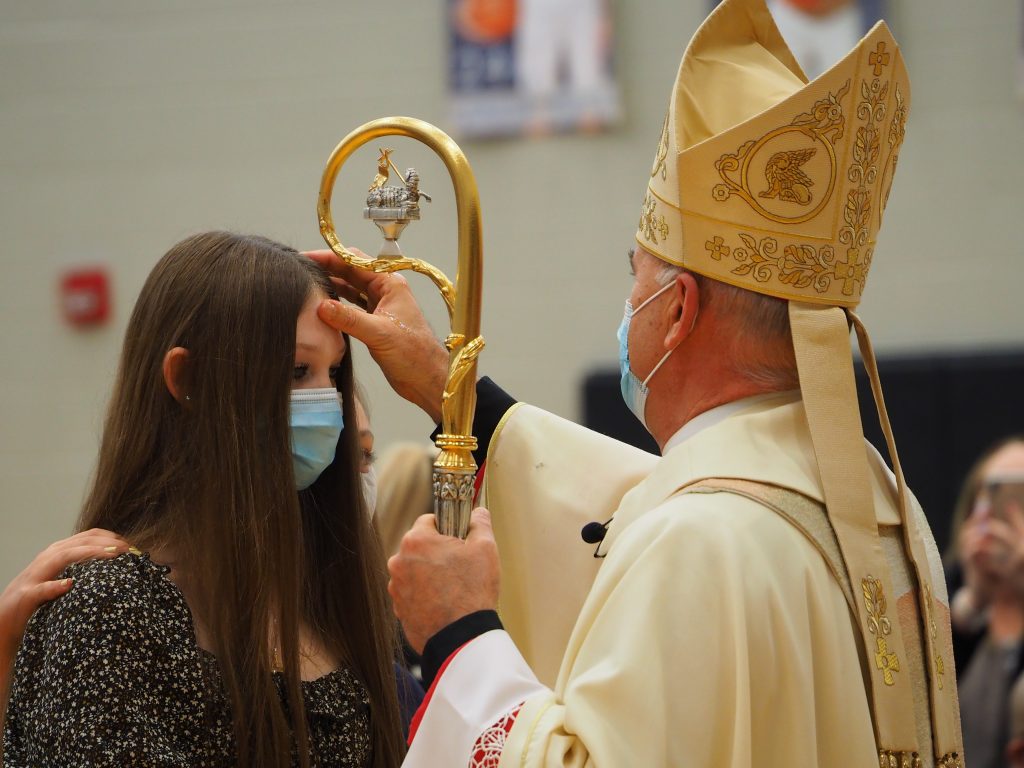 One of the newly confirmed, sophomore Genevieve Lake, expressed her joy at being confirmed in the presence of her classmates.

“It’s really exciting because it’s a special thing — it’s the feast of St. Joseph and we are Saint Joseph, so it’s a special day anyway.” For her sponsor, she chose upperclassman Mairi Weber-Hess because “I knew I could go to her when I needed an older person’s advice.”

Saint Joseph also honored several school teams after the Mass: the Quizball Team, which won the state championship for the ninth year in a row, and the girls swim team, which went to state. Swimmer Mary Cate Pruitt was singled out for being state champion for three years straight. 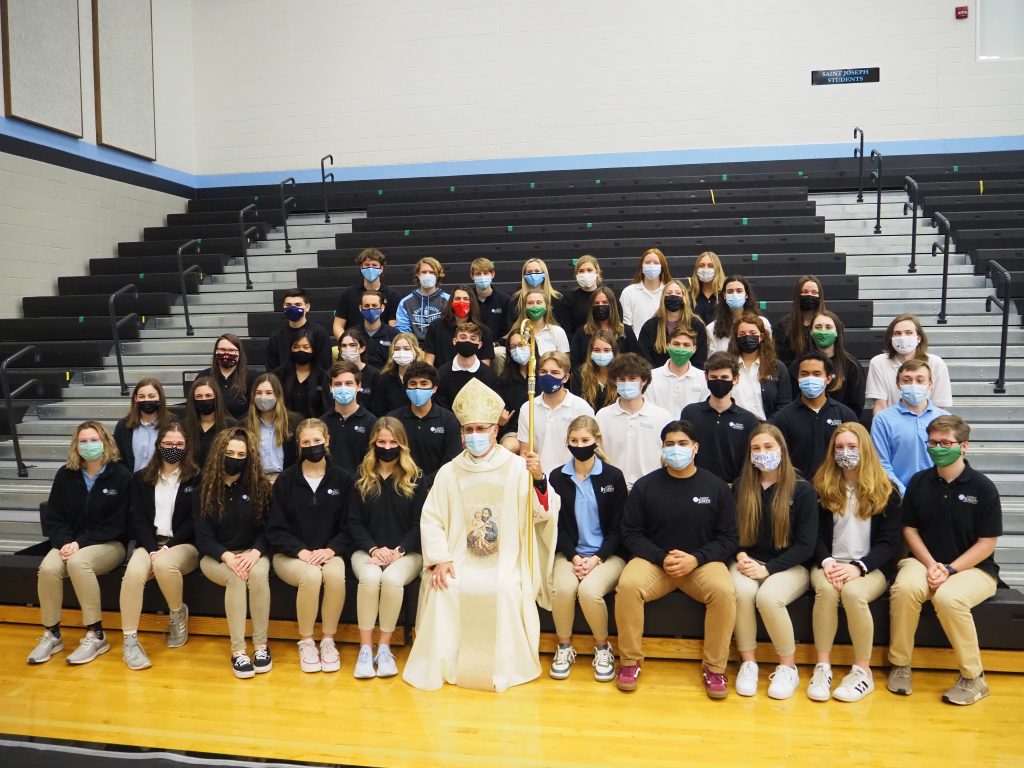 Bishop Rhoades poses for a photo with the 2021 Saint Joseph Scholars – students who have maintained a 4.0 GPA or higher throughout all four years at Saint Joseph High School.

Prayers were offered for the boys basketball team, which had won its first regional title since 1993. The Indians went on to semi-state play over the weekend but were defeated.

Bishop Rhoades joined members of the student council for lunch, discussing their favorite classes at Saint Joseph and extracurricular activities that they enjoyed. He was surprised to learn that some of them took Mandarin Chinese as a foreign language and joked with them about an upcoming production of “Godspell.”

Kennedy said he was proud of his school’s academic rigor, stating that Saint Joseph students are “well-prepared for college.” Saint Joseph is the only Catholic high school in the diocese to offer Mandarin Chinese and boasts a wide range of advanced placement courses, along with Project Lead the Way, a rigorous STEM curriculum that allow students hands-on learning in areas of science and engineering.

Beyond academics, Kennedy said he is proud of all his students. “They’re bright, they’re caring and compassionate, they’re faithful, and they have high standards for themselves. They’re amazingly talented and do amazing things, and they’ve been very cooperative and flexible this last year throughout the pandemic. I love them. They’re the best.”

He continued, “I shared with the students this week that this is a unique and memorable day to have the feast of St. Joseph in the Year of St. Joseph. It’s just special; we can feel the presence of St. Joseph here with us today. To have Bishop Rhoades here in the school saying Mass, delivering a prayer service that will be shared throughout the diocese — it’s just such a special day, and we’re blessed to be here.”

There is a legend at the school that on the solemnity of St. Joseph, his statue in the entranceway will be illuminated by sunlight from the windows above. This year, the sunlight streamed down upon him, confirming for many the presence of the school’s patron saint on a most memorable day.