Parishioners embraced their Irish history at St. Patrick Parish in Walkerton on March 14 with a Mass of dedication of an altar to mark the church’s 150th anniversary. Bishop Kevin C. Rhoades celebrated, asking the congregation to consider the anniversary an opportunity to “commit yourselves anew to the mission of evangelization.”

“Let’s not just celebrate the past today. I encourage you to look to the present and future of your parish,” he said.

Touches of Irish tradition colored the liturgy, along with splashes of shamrock green worn by those present in the small but full church, honoring the upcoming feast of their patron saint. The tribute was especially noticeable in the music, which was arranged in the Glendalough Mass style with songs set to Irish tunes and including one based on St. Patrick’s Breastplate prayer, as well as the addition of a flute accompanist.

Drawing on the weekend’s Gospel reading from the Book of John, in which Jesus meets the Samaritan woman at the well, Bishop Rhoades spoke in his homily of thirsting for God.

“What she’s thirsty for is what we all are thirsty for: for truth and goodness, for meaning in her life; for joy and peace. In every one of us there is this thirst in our souls for life and salvation, a thirst for the infinite, basically, the thirst for God.

“Jesus wants to quench our thirst. This is what Jesus is thirsty for: our faith and our love so that He can quench our thirst for life and joy, peace and salvation. … Jesus thirsts for our salvation like He deeply thirsted for the salvation of the Samaritan woman at the well.” 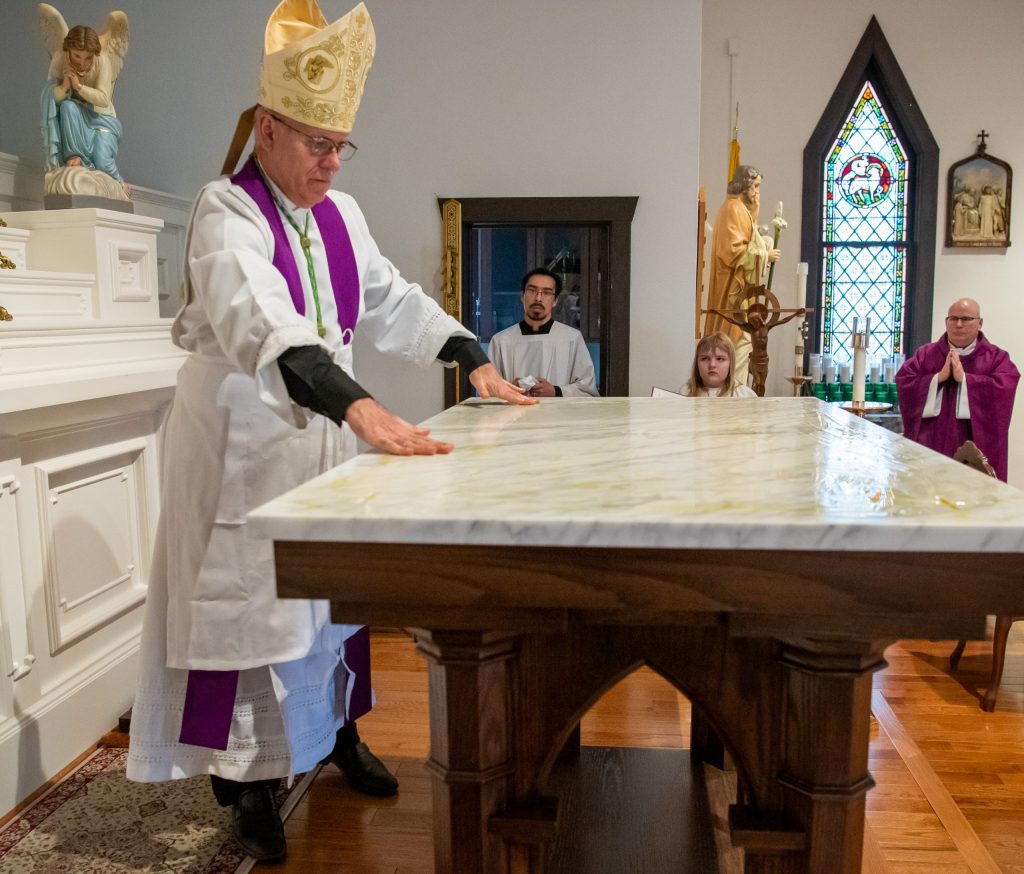 Photos by John Martin
Bishop Kevin C. Rhoades pours sacred chrism on the altar at St. Patrick Church, Walkerton, during a Mass celebrated March 14. The Mass marked the 150th anniversary of the church and included the Rite of Dedication of the new altar.

He spoke of the founding of the parish in 1856 and the building of the church in 1870, reminding those present of the faith of their founding members.

“My brothers and sisters, for 150 years, the faithful have come to this church to have their thirst for meaning, purpose, life, and salvation quenched. Here they have been refreshed by the living water which is the Holy Spirit. Here they have been nourished by the Body and Blood of Jesus. And from here, they have gone out to proclaim and witness to others in their families and community the joy of their faith.”

Bishop Rhoades gave the congregation of St. Patrick a mission: to emulate the Samaritan woman, whom Jesus “set on fire in her the flame of God’s love.” He beseeched them to let their lives be transformed by God’s work in their lives. “And may you and all the faithful of St. Patrick Parish leave the water jar behind at the well and take the Good News to your homes and communities!”

After singing the litany of the saints, Bishop Rhoades anointed the new altar with sacred chrism. He informed those present that dedication of an altar is the only time that sacred chrism is used on an inanimate object, demonstrating the importance of the altar. Participating in the cleaning and dressing of the altar were parish members Ben Jimenez, Vicki Krohn, Leonard Kuzmicz, Susan Rudecki and Pam Borton. 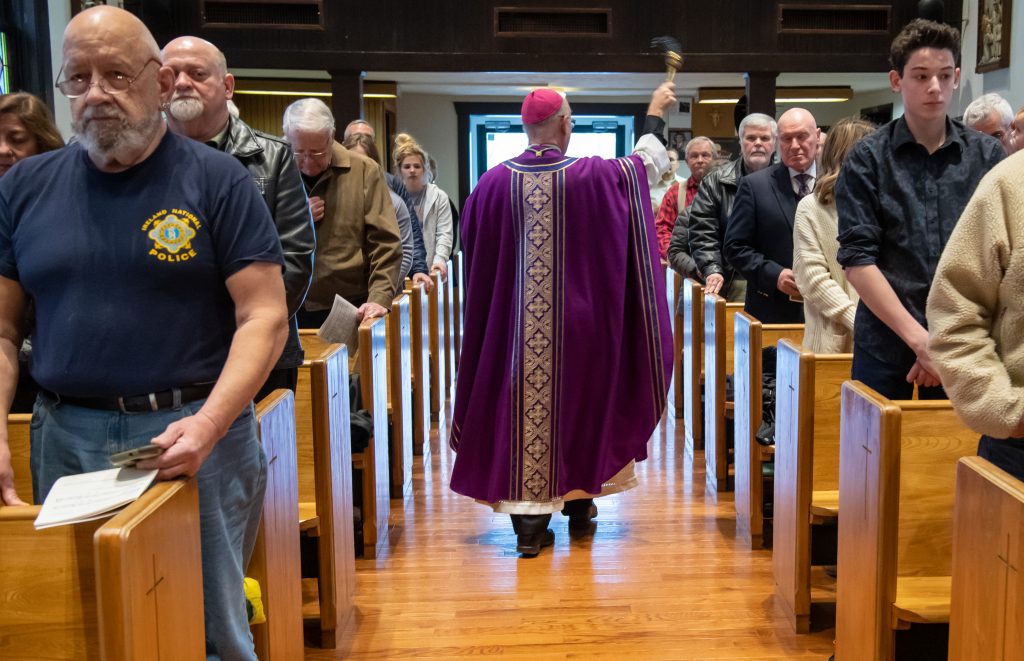 Prior to the Liturgy of the Word, Bishop Rhoades blesses those present with holy water.

Immediately following was the lighting of the altar. Pastor Father Eric Zimmer lit the altar candles amidst a haze of incense, highlighting the mystical beauty of the ceremony and the elegance of the high altar.

The original church was 45 feet by 22 feet in size, built by 19 families. It has been expanded throughout the parish’s history to the size it is today. Many of the founders of the church were Irish Catholics who worked on the Cincinnati, Peru and Chicago Railroad extension in the area.

In the parish’s early history, it was served by Holy Cross priests and priests of the Precious Blood order. 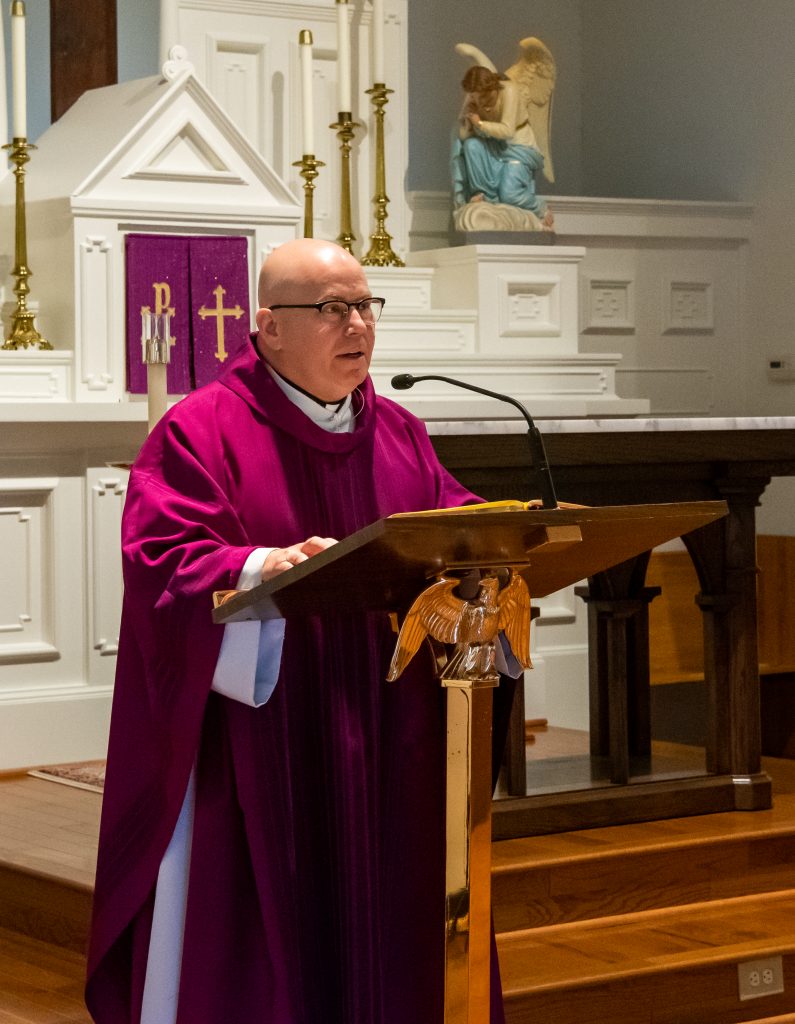 Pastor Father Eric Zimmer proclaims the Gospel reading, from the Book of John, during the anniversary Mass.

In addition to the new altar, Father Zimmer said the church itself has seen “quite a bit of renovations” in the last several years. Its stained-glass windows have been restored, including opening a wall that had hidden the rose window in the bell tower from view. Floors were redone and a new audio system installed, complete with a hearing loop for those with hearing aids, among other improvements. The parish hall and church grounds have also seen many upgrades.

Aside from physical improvements, St. Patrick has advanced in its community-building activities as well. Father Zimmer stated that the parish has grown over the last few years, gaining roughly 50 families. “Religious education has grown from about 30 children to 40-50,” he noted.

St. Patrick organizes an annual St. Patty’s Day dinner, a social event for the community that was held immediately after the dedication Mass. The dinner has been served since around 1947 and continues to be popular, with all 150 tickets selling out each year. Earlier this year a Super Bowl party and chili cookoff also took place, and participants watched the game on an 8-foot television screen. 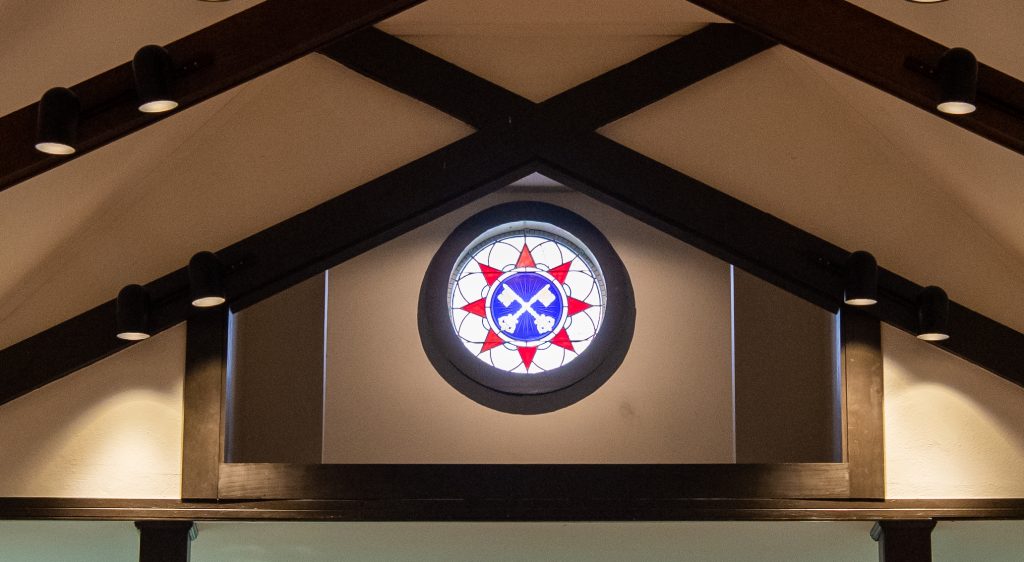 St. Patrick Church has seen its share of renovations since its humble beginnings. The most recent renovations have drawn to completion and include the opening of an interior wall, enabling worshippers to view the rose window in the steeple on the inside of the church.

The parish looks for ways to be good stewards of the earth, with one example being the use of real plates during fish fries. Evangelization is important as well, and those efforts include a ministry group dedicated to bringing Communion to parishioners who are unable to attend Sunday Mass.

Of the ceremony, Father Zimmer said, “It’s spectacular. It went beautifully.” Father Zimmer has served at St. Patrick for the past five years. “It’s been a wonderful experience for my priesthood. I think I’ve done a lot of good for the parish.” Indeed, parishioners have expressed thankfulness for his leadership.

The people of St. Patrick are proud of their small church and the upgrades made to it. Richard and Kathy Eichstedt have been members for almost nine years.

“It’s been a wonderful parish from the beginning,” Kathy said.

The couple spoke of the array of improvements to the church and parish hall, as well as the feeling of community present in the faith community. “We’ve had wonderful priests, and Father Zimmer has done so much for the parish. We love it here.”