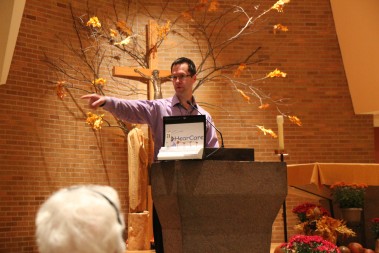 Patrick Paris, hearing instrument specialist for Hear Care Audiology, points out the location of the innovative hearing loop wire that runs the periphery of the sanctuary at St. Jude Parish during a presentation held on Oct. 26. The hearing loop works in conjunction with telecoil-equipped hearing aids and FM receiver devices to assist those with hearing loss.

FORT WAYNE — The induction hearing loop system, a new and innovative technology that assists those with hearing loss, has arrived in the Diocese of Fort Wayne-South Bend. Recently St. Jude Parish in Fort Wayne has installed the assistive listening device system that works in conjunction with telecoil-equipped hearing aids or cochlear implants and can also be used with streamers and FM receiver devices.

According to hearingloop.org, with the looping system, many of the 8.4 million people in the U.S. who struggle with hearing loss in churches, social arenas and conferences can now hear a broadcast straight from the source “without extraneous noise or blurring of the sound.” The induction loop system transmits magnetic energy to the telecoil in hearing aids or cochlear implants through a wire connected to the sound source that circles a room or arena. The sound is transmitted directly to the hearing aid or cochlear implant electromagnetically by the loop with no extra equipment save the telecoil.

Also known as T-coil, the telecoil is a small copper coil included in most hearing aids and cochlear implant processors. Originally designed to boost telephone handset signals, it functions as a wireless antenna, linking into a sound system, and is activated by a t-switch on the hearing aid. When paired with the loop system it can connect the listener directly to the sound source, eliminating background noise. According to hearingloop.com approximately 65 percent of the hearing aids used in the U. S. have telecoils with few consumers having working knowledge of them.

Mary Pohlman, pastoral associate at St. Jude, reports that the idea of the loop system had been discussed previously in response to the numerous requests by parishioners to improve the acoustics in the church. “We have a significant senior population at St. Jude,” says Pohlman, adding that after so many requests for hearing assistance, then-pastor Father Tom Shoemaker did some research and made the decision to install the hearing loop.

The installation marks St. Jude as the first Catholic church in Fort Wayne to employ this technology and a forerunner in Mayor Tom Henry’s Loop Fort Wayne initiative to eventually loop city churches, civic and entertainment arenas and more. First Presbyterian Church and Theater and Trinity English Church are currently looped and other possible venues include University of Saint Francis, the Embassy and the Foellinger Center.

Patrick Paris, hearing instrument specialist for Hear Care Audiology, and Sandy Riley, Hear Care marketing specialist and also a parishioner of St. Jude Parish, met with parishioners to explain the loop system and answer questions after Masses on Oct. 26-27. The wire installed under the rubber carpet trim creates a sound field, explained Paris, which is transmitted to the T-coils of hearing aids or the FM receiver devices that use ear buds or headphones.

Paris explained that any wireless device is subject to the elements. “T-coils only work as well as the hearing aid works. The hearing aid should be properly adjusted,” he encouraged.

Even though the system has only been in place for a few weeks, Pohlman says, “There are people who are already responding that they can hear so much better in church. If there is only a handful who can hear the homily and participate better in Mass then it’s worth it.”

St. Jude parishioner Randy Bandor is trying out a new high-tech hearing aid and said of the loop at Mass, “I heard excellent with it. I’m definitely sold on it. I sang in the choir and even was able to hear myself.”

Parishioner Ernest Evans agrees, saying, “I think it’s excellent. You have to get used to it, but any place I’ve sat in church it’s like the person was sitting next to me.”

Current St. Jude pastor Father Jacob Runyon says of the system, “There are two real benefits to the system. It helps people hear better. Any kind of big space can have echoes. I’ve already heard from people that they can hear more clearly. The second benefit is they use their own equipment. They have their own hearing aids.” Father Runyon said St. Jude has also purchased seven FM receivers for those in the congregation without hearing aids who would like to use the system using headphones. “It works really great,” concludes Father Runyon.