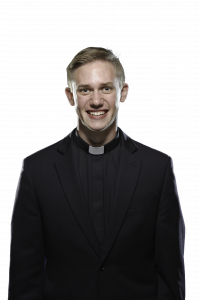 Deacon Daniel Niezer anticipates his ordination to the holy priesthood at the Cathedral of the Immaculate Conception on June 1. He has been formally preparing for this day throughout the last seven years of his education. The seed of a vocation was planted and cultivated much earlier than that, however.

He was raised Catholic and was born the same year that his home parish, St. Elizabeth Ann Seton in Fort Wayne, was built. His parents were committed to raising their family in the faith by catechetical education offered in the parish and at home, and by receiving the sacraments. Deacon Niezer says he “did not personally understand nor invest in the faith given to me,” though, in his early years.
He attended the public schools of Haverhill Elementary and Summit Middle School in Fort Wayne before attending and graduating from Bishop Dwenger High School. It was not until he graduated from high school and began thinking about what path he should take that he began discerning a vocation.

Deacon Niezer said his parents were certainly a catalyst in his decision to enter the seminary, and they have been his ongoing supporters. They are people of great faith, perhaps greater than his at the time, he said.

When he graduated from high school, he initially did not plan on participating in his faith other than by going to Mass on Sundays. But his parents encouraged him to go on a pilgrimage to World Youth Day in Madrid, Spain, during the summer of 2011. Other young people, priests and religious from throughout the Diocese of Fort Wayne-South Bend went also. Deacon Niezer said that throughout the pilgrimage he “received great graces, which opened up a whole new life of faith in the Catholic Church. This happened because of the encouragement of my parents, and through this experience, I was able to enter college with a very graced perspective on life and discernment.”

The joy he witnessed among millions of young Catholics at World Youth Day pushed him to re-examine his faith with a renewed spirit. He was led to a life of prayer and consequently to consider the seminary.

It was then that his pastor, Father James Shafer, took him under his wing and guided him through the discernment process. Deacon Niezer said, “He was instrumental in my decision to enter the seminary, and ever since I started my studies seven years ago, I can’t tell you the countless priests from our diocese who have been exemplary role models, confessors and guides in my discernment.”

During the Rite of Ordination he will make promises to the bishop and his successors to assume the responsibility of the office of the priesthood.

“These promises have been daily reminders of my lifelong obligation to the Lord and His Church, and I have no doubt that by having striven to live these promises here in my last year of seminary, the Lord will continue to support me as I am ordained a priest to faithfully and lovingly carry out these promises.”
Deacon Niezer never lost joy or zeal about pursuing the priesthood and striving in holiness during his days in the seminary, he said, and he can’t wait until he becomes a priest. He is very much looking forward to holding the Lord in his hands each and every day as a priest.

“Through the sacraments of the Eucharist and penance, I am most looking forward to living intimately with Christ as His priest who is privileged to say, ‘This is my body,’ and ‘Your sins are forgiven.’ To know that there will be many people seeking Christ, seeking His love and mercy, and to know that I will be given a role in that encounter as His priest … it is truly exciting to think about.”