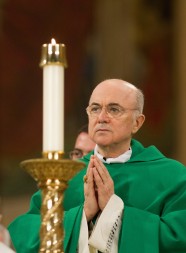 Archbishop Carlo Maria Vigano, apostolic nuncio to the United States, attends the opening Mass of the National Prayer Vigil for Life at the Basilica of the National Shrine of the Immaculate Conception in Washington Jan. 22.

Will offer keynote address at the Seeds of the Church conference

SOUTH BEND — Archbishop Carlo Maria Vigano, the apostolic nuncio to the United States, will preach the homily at the 11 a.m. Mass at St. Matthew Cathedral in South Bend on Sunday, Nov. 4. Bishop Kevin C. Rhoades will celebrate the Mass.

A nuncio is a Vatican diplomat with the rank of ambassador. He is responsible for diplomatic relations with the government, but also serves as the pope’s representative to the Church in a given country, which includes responsibility for coordinating the search for and vetting of candidates to become bishops.

Archbishop Vigano will also be a keynote speaker at the Seeds of the Church: Telling the Story of Today’s Christian Martyrs conference at the University of Notre Dame from Nov. 4-6. John Allen, senior correspondent for National Catholic Reporter will also offer a keynote address.

The conference intends to raise consciousness inside and outside the Church regarding the widespread persecution of Christians around the world and to explore how the Church has responded and might respond vigorously and faithfully in the future.

The Institute for Church Life at the University of Notre Dame will host the conference. The event, to be held at McKenna Hall, is open to the public. Registration is now under way and is required for all participants. Conference registration is free.

A complete list of speakers as well as registration information is available at http://icl.nd.edu.

Archbishop Vigano was named the apostolic nuncio to the United States on Oct. 19, 2011. Born in Varese, in Italy’s far north, he was ordained a priest in 1968 for the Diocese of Pavia. He entered the Vatican’s diplomatic service in 1973 and served at Vatican embassies in Iraq and in Great Britain before working in the Vatican Secretariat of State in 1978-89.

He was the Vatican’s permanent observer at the Council of Europe in Strasbourg, France, from 1989 to 1992, when Pope John Paul II named him an archbishop and nuncio to Nigeria. Pope John Paul personally ordained him a bishop.

Archbishop Vigano — who speaks Italian, French, Spanish and English — was still serving as nuncio to Nigeria in 1997 when Pope John Paul visited the country.

Returning to the Vatican Secretariat of State in 1998, Archbishop Vigano coordinated the appointments of nuncios and papal representatives around the world.

In 1999, he led a five-man Vatican delegation to Iraq to try — unsuccessfully, it turned out — to make arrangements for Pope John Paul to visit. The pope had wanted to go to Ur, the city thought to be the birthplace of Abraham, as part of a biblical pilgrimage for the year 2000. At the time, Iraq was under an economic embargo by the West and Ur was under a no-fly zone being enforced by U.S. and British military.

In November 2010 the archbishop was called upon to represent the Vatican at the general assembly of Interpol, the international cooperative organization for police agencies. In his speech to the assembly, he highlighted the ongoing violence against Christians in Iraq, but also spoke more generally about the Vatican’s conviction that the promotion of human rights is the best strategy for combating inequalities that lead to crime and terrorism.