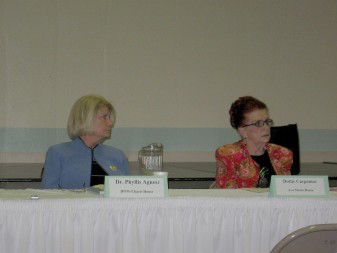 FORT WAYNE — What is the face of homelessness?

A group of local experts on the topic attempted to answer questions like this at a panel session April 29 at St. Jude Catholic Church.

The panel was presented as an educational offering from the St. Jude Social Action Committee. This committee, headed by Shelia Bruening, invites parishioners to learn about social issues and participate in the corporal works of mercy through various efforts like this panel.

Mollie Cripe opened the discussion with a look at how the homeless are counted annually, as mandated by the government. This population, she noted, is rather hard to count due to various factors, therefore it is difficult to ascertain an accurate number. What’s more, she noted a sad reality: There are a lot of “first-time homeless.” These are hardworking people who might have lost their homes due to the weak economy.

The minister debunked some myths about the homeless. The stereotype of the unkempt, drug addicted man is not always the reality. First of all, he cited a statistic that 36 percent of the homeless are families. Sadly, children under 18 are the fastest growing segment in the United States. In short, Anderson called to mind a “new face of homelessness … people like you and I.”

St. Jude’s parishioner Ann Helmke is the director of the transitional shelter Vincent Villages in Fort Wayne. The organization is unique in that it is the only transitional shelter in Allen County, serving two-parent families and single-male headed families without requiring the families to split up in order to access transitional shelter.
Echoing Anderson’s comments, she said, “The face of homelessness to me is a young child.”

Helmke spoke firsthand about her work with needy families. “Each family brings a different story to the door,” she said. While some of her clients are stricken by generational poverty, many are newly homeless, former homeowners who have lost everything.

Still, in the face of a grim reality, Helmke has not given up. Vincent Village has taken a proactive approach to homelessness. According to the organization’s Web site, the Vincent Village Rental Housing Program was created to fill this affordable housing gap. In the past 15 years, Vincent Village has purchased and renovated 32 vacant and abandoned single-family houses in the three-block area surrounding the original Vincent House Transitional Shelter.

“It has created a community,” she said about the housing development.

Phyllis Agness provided both an analytical and personal account of this social issue. In Fort Wayne Community Schools alone, 340 students were reported as homeless, she said.
And as a volunteer at the Charis House, a local shelter for women, Agness has witnessed changes in recent years. She said 100 women and children are typically turned away in a given month, a dramatic contrast from a few years ago when the shelter had capacity to serve almost everyone who walked in the door.
“There’s nowhere for them to go,” she said.

Yet it’s in times of despair that people like Dottie Carpenter triumph. Carpenter founded the Ave Maria House in 2008 as a ministry of St. Mary’s Catholic Church.
The house welcomes homeless men six days a week. Over the past two years, Carpenter has become acquainted with several of the regular visitors. “That’s their house,” she said.
Above all, she said that these men want to know that someone cares. And that someone is her.

“I have found when you treat people with dignity and respect they turn around,” she said.

In her work she has come to believe in the power of education and employment to overcome homelessness.
Following the discussion panelists answered questions from the crowd.