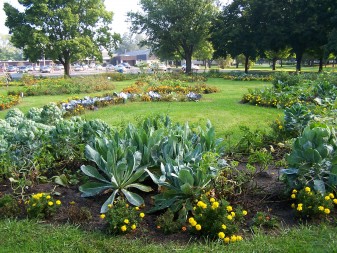 Our Lady’s Garden in bloom during the summer.

MISHAWAKA — Designed in the shape of a rosary, Our Lady’s Garden at Queen of Peace Parish intertwines the elements of flora and faith in its landscape and scope. With perennial and vegetable gardens providing color and refreshment, and a serene grotto for spiritual nourishment, the community garden welcomes parishioners and visitors year round.

Our Lady’s Garden co-chairs Barb Holderbaum and Debbie Anthony, recall that in March 2008 Queen of Peace pastor Father Daniel Scheidt announced to the congregation plans to construct a community garden that would serve parishioners and also those in need.

Holderbaum, who has a degree in landscape architecture from Purdue University, came up with three designs for the garden. The design chosen by Father Scheidt, was Holderbaum’s favorite.

“I think the garden has brought a lot of people together from Queen of Peace,” says Anthony. Holderbaum adds, “The cross-generational aspect is fabulous. I love when some of the older members of the parish intermingle with my kids while gardening.”

A diagram of Our Lady’s Garden shows its rosary shape.

Father Scheidt encourages parishioners to become good stewards when they harvest their produce. “If you want your entire plot to go to the St. Vincent de Paul Society, that’s fine,” says Holderbaum. “If you want the harvest mainly for yourself, father just asks that the first fruits be given to the poor.”

Another path to stewardship involves bringing produce from Our Lady’s Garden and placing it in a container in the back of the church. “People can also bring produce from their own gardens at home to add to those from the garden. This helps many of the older members who may want fresh produce but aren’t able to harvest it themselves,” Anthony emphasizes.

Our Lady’s Garden also provides a venue to socialize with other parishioners or neighbors that live close to the parish. “On the third Wednesday of every month we have a garden social meeting. It helps new people feel more welcome and get to know those that have already worked in the garden,” says Anthony.

Those living in the surrounding parish neighborhood use the garden pathways for walks in the evening. Some neighbors have brought over seedlings, started in their homes, for planting in the vegetable and garden areas.

The parish school also has their own section within Our Lady’s Garden. “In fourth grade the kids study the Indian culture and learn about the Three Sisters; corn, beans and squash. They plant those items at the end of that school year and harvest the produce as fifth graders,” says Holderbaum.

Anthony adds that for the last two years students have planted marigolds (from seeds started in the classroom) around the vegetable gardens to help keep pests away due to the flower’s smell. Parishioners also have purchased flats of marigolds from the church plant sale in May to finish bordering the entire garden.

Several improvements to Our Lady’s Garden include a sprinkler irrigation system donated by Anthony Irrigation. A fence for the children’s garden area, which encloses small playground equipment for youngsters to use while parents are working the garden, was also donated by a parishioner. 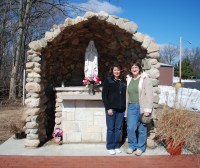 Queen of Peace garden co-chairpersons Debbie Anthony and Barb Holderbaum stand in front of the grotto in Our Lady’s Garden.

Last October, a grotto that had been in the planning stages since the garden’s conception, was completed. The majority of the rocks used for the Marian shrine came from the Holderbaum farm. A “per standard altar,” designed by Father Scheidt, is used for outdoor Masses, and a pavement of bricks, with some purchased by parishioners and engraved with their names, are set in front of the grotto.

Since the design of the garden is in the shape of a rosary, plans for paved walkways between markers representing 10 rosary beads, are being developed. According to Holderbaum, the beads would be made from large square pavers with an embedded mosaic on each.

A parishioner donation of a marble plaque, which is set in the brick pavement of the grotto, embellishes the beauty and reverence that Our Lady’s Garden represents. A quote from St. Augustine on the plaque reads, “In the Lord’s garden are to be found not only the roses of His martyrs. In it are also the lilies of the virgins, the ivy of wedded couples, and the violets of widows. On no account may any class of people despair thinking that God has not called them. Christ suffered for all. What the Scriptures say of Him is true. He desires all men to be saved and to come to the knowledge of the truth.”