Now is a time of grace: a time when the miracle of change is possible through living testimony that people have no lasting place here. We make use of earthly realities, while not being at home in them.

The Order of Malta looks beyond besieged fortresses worn by conflict to the boundless spaces within people and the salvation of their souls. From the extract of its traditional rule comes this imperative: “When a sick person arrives, receive him thus: First having confessed his sins to a priest of the Religion, give him Holy Communion …”

Such is the Order of Malta’s motivation in conducting Lourdes Days of Grace and Healing. The outreach is an extension of an annual pilgrimage to Lourdes, but with a twist. Members of the order “re-present” the Lourdes experience with a rosary, washing and Mass for friends and neighbors in northern Indiana. 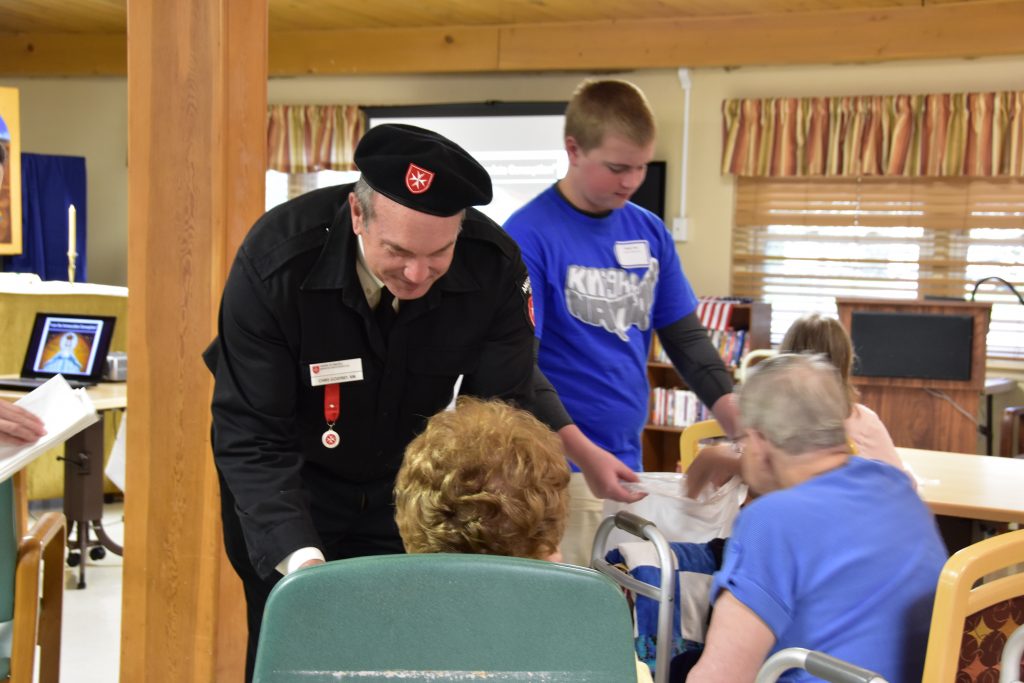 The tradition came in existence many years ago at one of the better-known Lourdes replicas: the grotto at the University of Notre Dame. Father Robert Dunn of the Westchester Area was so impressed that he adapted the devotion for use at an assisted living residence, adding a beautiful rosary meditation that equated the experience of its residents with that of St. Bernadette.

“Outremer” was a term for the Holy Land when the Knights of Malta were present and caring for pilgrims. Being a vast and inhospitable territory, they built a string of fortresses to serve as centers of respite and refuge. While northern Indiana is no longer the Wild West, it can still present difficulties for pilgrims on their way to the heavenly city.

St. Teresa of Kolkata often spoke of the aged and infirm. She encouraged her sisters to be “God’s light” for them during their final days, like encouraging a runner who is tempted to quit before reaching the finish line. Without God’s light, an enfeebled person can find it difficult to continue.

Like their Outremer predecessors, members of the Order of Malta are also geographically challenged. The Diocese of Fort Wayne-South Bend is a two-hour drive between its two principal cities, so the order’s activities have remained largely in South Bend. But with Outremer in mind, they are beginning to string events across the territory, with plans for further expansion. They have also formed partnerships with other chivalry-minded Catholics, like the Knights of Columbus and chaplains from the Equestrian Order of the Holy Sepulcher.

Members wear their work uniforms and sometimes gowns while they show images from Lourdes and play soul-lifting music. A retable, or decorated panels, was commissioned for behind a portable altar created for the occasion. Presently the panels depict the Lord’s crucifixion, Mary and Elijah, with a guardian angel and St. Michael the Archangel soon to join them.  A booklet was created with related prayers, including instruction for saying the rosary, and an explanation of the artwork’s elements and how they might apply to the residents’ lives. Filling the panels is the deep blue sky, which, like God, is silent but unmistakably present.

After a particularly difficult time, Elijah was tired of living and wanted to die. But he, like the residents we visit are still around, meaning God’s plan for them continues to unfold. During this time God cared for Elijah tenderly and simply, thereby preparing him for the journey ahead. Elijah is an example of prayerful, faithful patience.

The graces won by Jesus are distributed by Mary like the roses at Guadalupe, and her messages at places like Rue du Bac, Lourdes and Fatima. They flow as the water of life without cost to all who thirst. Mountains represent faith rising from the desert of this world, while John stands at the foot of the cross looking to Mary for wisdom. The white dog represents faithfulness, the prerequisite of wisdom.

A guardian angel accompanies and lead all to eternal life, while St. Michael quiets rebellious attitudes. Both are invisible but powerful allies in the wilds of Outremer.

The order has received many positive follow-up reports from the residents and activity directors of the centers members have visited. One resident, many months later during a raucous Oktoberfest celebration, wistfully said, “It is so beautiful.” The director asked, “Oktoberfest?”

“No, Lourdes Day!” she replied.

At another center, a resident was accompanied by her daughter, who took a bottle of the Lourdes water for her infant daughter going in for tests. Rather than identifying her disease, the tests failed to find any disease at all. Another woman decided to take instruction in the Catholic Faith, while another went to confession and returned to the Church. One gentleman said it was the best thing his residence had done in years. Not a bad return for a small amount of effort.

A follow-up, weekly rosary also has begun, taking its inspiration from anchorites like Julian of Norwich who lived apart from the world to devote herself to prayer, meditation and study. In time, members of the Order of Malta hope Lourdes Days will become seeds for Outremer-like fortresses of prayer intercession for all, providing a vision for life and reassuring with Julian’s words: “All will be well, all manner of things shall be well.”