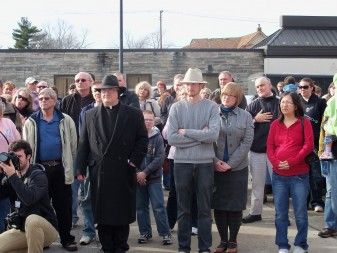 Men, women and children from all over Elkhart County gathered for a rally and march for life on Jan. 12, which concluded with prayer at the Women’s Care Center. Shown among the crowd gathered are, in front from left, Father Glenn Kohrman of St. Vincent de Paul Church in Elkhart, Noah Schmucker (in hat) and his wife Ruth of Goshen and Ani Wallach, also a parishioner at St. John the Evangelist in Goshen.

ELKHART — They came from all over Elkhart County — Elkhart, Goshen, Nappanee, Millersburg and more — to rally together in support for life and the end to abortion. The Rally for Life was held at the Lerner Theatre in Elkhart by The Elkhart County Right to Life organization. Representatives from RETA (Reason Enough To Act) and Hannah’s House were on hand.

The emcee for the event was Chuck Freeby. Pastors from several churches who offered prayers throughout the event included Father Glenn Kohrman, pastor from St. Vincent de Paul Church in Elkhart, Pastor Mike Fisher of Grace Bible Church and Pastor Gregg Lanzen of First Baptist Church of Goshen. Organizers said the number attending has grown since last year. Many were first time attendees.

Julie Senger of Millersburg was there with her family — husband Jack and children Jamie, Jarrett and Jenna. The family attends St. John the Evangelist Church in Goshen.

“I wanted to be here to show our kids how important it is — that this is part of our faith and we need to stand up for what we believe in,” she said.

Senger said she couldn’t imagine life without any of her children and she believes the time is right to share this issue especially with her teenage sons.

Jane Hoover of Goshen also was a first-time attendee. Hoover said she was there to “affirm the sanctity of life. I want to pass on a legacy to my grandchildren that they are God’s precious children.”

She believes continuing to have such rallies is important “because society has become desensitized to what is now the norm in the U.S. Abortion will never be right,” Hoover said. “It’s time to bring back the sanctity of life.”

Congresswoman Jackie Walorski spoke briefly to the crowd, saying, “This is a great day to declare life in Elkhart County. We’re here for those who don’t have a voice.”

The keynote speaker was teacher, author and radio show host Peter Heck, who told the audience he believes this will be “the generation that will end the abortion holocaust.”

“Fifty-five million lives taken since Roe v Wade in 1973 — more than Hitler or Stalin. Every 94 seconds an abortion was performed in 2011. Those were human beings who were denied the inalienable right to life,” Heck said. “Every day in this country a slaughter worse than 9-11 goes on. We lost 3,000 lives on 9-11, 4,000 children are sacrificed a day,” according to Heck. 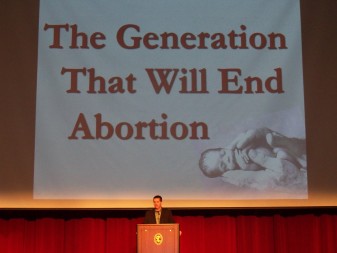 Keynote speaker for the Rally for Life event held at The Lerner Theatre in Elkhart on Jan. 12, Peter Heck, stands beneath a slide that projects his belief that this will be the generation that puts an end to abortion.

Heck said it was time for pro-lifers to get tough. “When laws that we enact end with, ‘and then you can kill the baby’ we have utterly failed.”

He was referring to laws such as those passed that require a young girl to have parental consent before an abortion is performed. He also said he believes when those in the pro-life movement make the argument that we could be losing the next Einstein or Beethoven to abortion that could actually be hurting the cause.

However, he said he believes this will be the generation to end abortion because the key point of what is in the womb has been established. He said the legislature for Roe v. Wade even states that “if the case is made that a fetus is a person then the fetus’ right to life is guaranteed by the 14th amendment.”

Heck said that case has been made and any argument that is made against it sounds absurd. He said if those who are pro-life stick to the fact that the unborn child is a living human when engaging in any discussion on the subject, it will force people to confront the truth and put an end to the inhumanity, such as what happened when slavery was abolished.

Women from an organization called Silent No More who have experienced abortions also spoke at the rally. Two from Fort Wayne shared their personal stories, sharing the physical and emotional pain that no one prepared them for, the years of regret, shame and guilt until they found God, redemption and the road to healing. Both went through the Forgiven and Set Free program.

Father Tony Steinacker, pastor of St. John the Evangelist Church in Goshen, attended the event and said it was “extremely powerful — the numbers were very impactful,” He said the statistics about abortions being performed every 94 seconds and hearing the BBs drop were particularly poignant. “Those things were huge for raising awareness,” he added.

Darlene Leitz of Goshen has been a board member on the Elkhart County Right to Life for approximately five years and is also a member of the Holy Innocents Pro Life Group, which has members from St. John the Evangelist, St. Vincent de Paul, St. Thomas the Apostle in Elkhart and St. Mary in Bristol.

Leitz said her hope is that “people will work harder, like Peter Heck said, to see the truth and be part of the solution.” Leitz believes in protecting life for all, from the moment of conception to natural death.

After the program the group marched to the Women’s Care Center where they concluded with prayer for the unborn and those affected by abortion.

Silent No More offers these resources for those recovering from abortion: