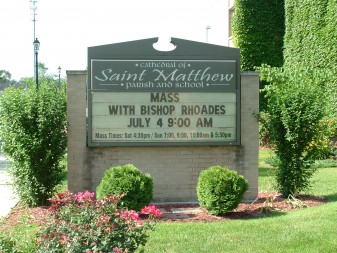 Bishop Kevin C. Rhoades will celebrate a Mass concluding the Fortnight for Freedom on July 4 at 9 a.m. at St. Matthew Cathedral, South Bend.

SOUTH BEND — The Aug. 1, 2013 deadline is rapidly approaching for religious institutions to comply with the Affordable Care Act, commonly known as “Obamacare,” Health and Human Services (HHS) Mandate. This regulation requires religious employers and employees to pay for contraceptives, sterilizations and abortion inducing drugs — one way or the other. In response to this and other threats to religious freedom, the U.S. Conference of Catholic Bishops has organized a Fortnight for Freedom, June 21 to July 4, a two-week period of prayer, sacrifice and citizen education for the cause of religious liberty.

Notre Dame law professor Richard Garnett will speak on the critical issue of religious freedom in America, “Why Religious Freedom Matters,” to local Catholics and others concerned with the erosion of religious freedom. The event, scheduled Wednesday, July 3, at 7 p.m. at St. Matthew Cathedral in South Bend, is free and open to the public.

The HHS Mandate is an open and flagrant attack on the First Amendment right to the free exercise of religion because it was a well known fact prior to the enactment of this mandate that the use of contraceptive and abortion inducing drugs and sterilization procedures was gravely contrary to the faith of Catholics and other people of faith, and still others with no particular faith. Forcible coercion by the government to pay for these drugs and procedures is a direct attack on religious liberty and conscience rights.

The American Catholic Bishops have categorically stated, “We cannot and will not comply” with the HHS mandate.

Bishop Kevin C. Rhoades will celebrate a Mass concluding the Fortnight for Freedom on July 4 at 9 a.m. at St. Matthew Cathedral.

Professor Richard Garnett is an associate dean for Faculty Research and Professor of Law and a Concurrent Professor of Political Science at Notre Dame. The university website notes that he “teaches and writes about the freedoms of speech, association, and religion, and also about constitutional law more generally. He is a leading authority on questions and debates regarding the role of religious believers and beliefs in politics and society.”