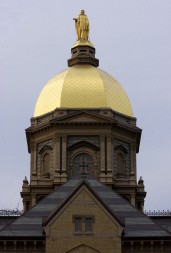 SOUTH BEND (CNS) — The University of Notre Dame released a pastoral plan “grounded in the Catholic mission” of the university that will expand support and services for students “who identify” as gay, lesbian, bisexual and transgender and those “questioning” their own sexual orientation.

The plan, released Dec. 5, is titled “Beloved Friends and Allies: A Pastoral Plan for the Support and Holistic Development of GLBTQ and Heterosexual Students at the University of Notre Dame.”

The plan calls for Notre Dame to establish a “new support and service student organization for GLBTQ students and their allies,” as well as a new advisory committee and to create a full-time student development staff position focused on issues of concern to these students.

“I appreciate the careful and thoughtful work of this review that considered both the needs of our students and the teachings of the Catholic Church,” Father Jenkins said in a statement.

Quoting the U.S. Conference of Catholic Bishops’ 2006 document, “Ministry to Persons with a Homosexual Orientation: Guidelines for Pastoral Care,” it says the university “endorses the emphatic pastoral teachings … that all people are created in the image and likeness of God and thus possess an innate human dignity that must be acknowledged and respected.”

“At the same time, the university also adheres to the Church’s teaching concerning homosexual actions, that ‘homosexual persons are called to chastity’ and to ‘friendship,’ and should cultivate ‘the virtues of self-mastery that teach them inner freedom,” it continues. “Indeed, each and every student at Notre Dame is called to nothing less. All Notre Dame students are urged to understand and live the teachings of the Church relative to their lives and expressions of sexual intimacy.”

As the Church teaches, sex outside of marriage “is essentially contrary to its purpose,” the plan says.

Since the 1990s, Notre Dame has had a student standing committee, most recently called the Core Council, to advise the vice president for student affairs on issues with regard to gay, lesbian, bisexual, transgender and “questioning” students.

In an interview with The Observer, the campus newspaper, Father Jenkins said Notre Dame has “made real progress” over the years serving these students, but he asked Erin Hoffmann Harding, the current student affairs vice president, and her office to conduct a comprehensive review of “everything we do, all the support structures, and find out how we can do things better.”

“The first one was consultation with Church teaching,” she told The Observer. “The parameter for this solution needed to serve our students well but be grounded fundamentally in our Catholic mission as a university. So we’ve spent time with theologians and members, in particular, of our faculty, who have given us advice on this matter and on Church teaching — that’s activity number one.”

Secondly, there were “extensive conversations” with undergraduate and graduate students, she said, and the third element was a look at “the breadth of structures” other Catholic institutions have in place.

Bishop Kevin C. Rhoades of Fort Wayne-South Bend said that Notre Dame in its pastoral plan “clearly affirms its fidelity to Catholic Church teaching on human sexuality by affirming that ‘sexuality is ordered to the conjugal love of man and woman’ and that the fulfillment and proper context of human sexual love is to be found in the marital covenant.”

It also affirms that “men and women who have homosexual tendencies ‘must be accepted with respect, compassion and sensitivity,’” he said in a Dec. 6 statement.

“It is my hope and prayer that the rich Catholic teaching on sexuality, teaching that serves the true good and happiness of the human person,” he said, “will be embraced by the students and all involved” in carrying out the pastoral plan.

He added he hoped the new campus organization would provide the support students need to prevent them from feeling isolated and alienated, which are “risk factors for an unhealthy life, including unchaste behaviors.” The plan should be a help to all students live “a chaste and holy life,” he said.

The plan’s implementation calls for several actions, including:

• Training of student leaders and staff and faculty, and the education of all students, “so as to create and sustain a safe and supportive environment for all members of the Notre Dame community.”— Support for “out or questioning students” within programs and initiatives coming from multiple units on campus, such as the Gender Relations Center, campus ministry and the Institute for Church Life; and relevant student groups. Initiatives will include conferences, retreats and support groups.

• Opportunities intended to assist all members of the Notre Dame community “in their ongoing exploration of and conversation concerning a Catholic understanding of sexual intimacy and the calls to chastity and holiness of life.”