The annual University of Notre Dame Forum on topics of importance began its 2019-20 season with the difficult issue of clergy sex abuse in a Sept. 25 keynote panel entitled “The Church Crisis: Where Are We Now?”

The four panelists have a wide spectrum of experience with the topic. Archbishop William E. Lori of Baltimore was appointed to the U.S. Bishops’ Ad Hoc Committee on Sexual Abuse in 2002 and helped write the “Charter for the Protection of Children and Young People.”

Kathleen McChesney had a long career in law enforcement, capped by service as FBI executive assistant director. She was appointed in 2002 as the first executive director of the US Bishops’ Office of Child and Youth Protection. She continues to consult on the topic.

Juan Carlos Cruz is a clergy sex abuse survivor from Chile and outspoken advocate for survivors, Cruz travelled to Rome and successfully convinced a skeptical Pope Francis that complaints about Chilean priest abusers were credible and should not be dismissed.

Journalist and educator Peter Steinfels has reported on the sex abuse crisis for 30 years. He is a former columnist for The New York Times and continues a long career with Commonweal. He also has taught at Notre Dame, Georgetown University and Fordham.

Moderating the panel was journalist John Allen, longtime Vatican correspondent for The National Catholic Reporter and now editor of Crux.

Steinfels led off the panel by discussing the precipitous drop in the number of clergy sex abuse cases, declining by almost 97 percent over the past 60 years. Such statistics should not blind us to the “excruciating” devastation caused by a single case of abuse, he continued, but the statistics cannot be ignored.

The sex abuse scandal will always remain one in the long list of betrayals of Jesus Christ over the centuries, Steinfels said. But if the danger to children in U.S. Catholic institutions has been dramatically reduced, he asked: “Why are we talking about not just a lasting scandal but about a pressing crisis?”

Steinfels concluded by observing that the Church needs an accurate history of the sex abuse scandal, based on archives, oral histories and studies, and he asked Catholic colleges and universities to take on the task.

Cruz told the audience that he speaks from the heart, as a survivor of clergy sex abuse. He acknowledged that it is difficult to speak out, but he said he was honored to have such a platform to encourage other survivors to seek help from the many good people who are dedicated to helping abuse survivors, and it is those people and other survivors who give him courage.

Referring to the U.S. statistics, Cruz said that while things have improved in the U.S. they have gotten worse in other parts of the world, including both Chile and Peru. He said he thought the abuse would end with Pope Francis’s 2019 Motu Proprio of norms for sex abuse, but it has not.

Cruz charged that some bishops bow to the pope when they are in Rome, but when they go back home, it is business as usual and nobody holds them accountable.

Archbishop Lori observed there are many learning curves for a bishop, but “I don’t think any of the learning curves have been as steep as discovering, learning, struggling to deal in some adequate way with the ugly specter of child abuse.”

He said that various policies had been in place since the 1980s, and the 2002 charter was an attempt to have all bishops deal with victims compassionately and try to prevent future abuse.

“But it’s one thing to have policies and procedures in place and another thing to draw out from them . . . the moral imperative to address this in the way that God only knows it deserves to be addressed.”

Archbishop Lori said the numbers of abuse cases are significantly down, “but one case is still too many.” He stressed that it is necessary always to see the charter and norms not just as policies to be complied with. Rather, he said bishops and their coworkers need to have “a conversion of mind and heart.”

The protection of children and care for survivors has to be as much a part of the Church’s life as evangelization, Catholic education and raising up vocations, Archbishop Lori said. 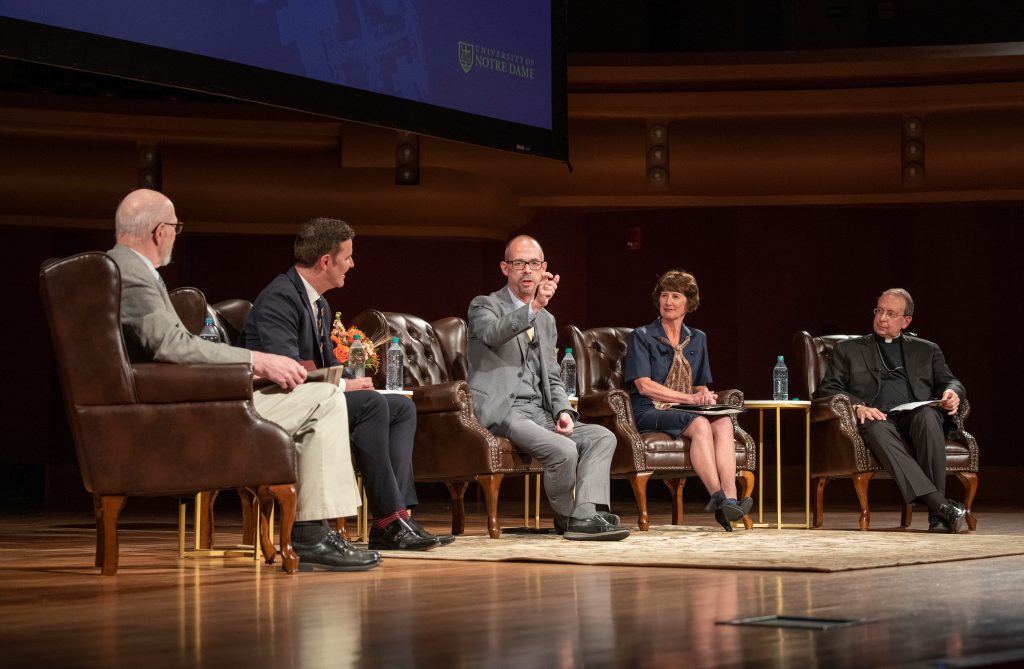 Moderator John Allen, editor of Crux (center), presents a question to panelists (left-right) Peter Steinfels, journalist and educator who has written for Commonweal since 1964; Juan Carlos Cruz, survivors advocate from Chile; Kathleen McChesney, former FBI executive assistant director who investigated victim allegations; and Archbishop William E. Lori, Archbishop of Baltimore, during the 2019-20 Notre Dame Forum titled Rebuild My Church: Crisis and Response, with a discussion on The Church Crisis: Where Are We Now? held at the DeBartolo Performing Arts Center. (Photo by Barbara Johnston/University of Notre Dame)

McChesney offered several observations, disappointments and predictions, based on her nearly two decades consulting on clergy sex abuse. First, she said it is “critical” for helping survivors heal to hold someone accountable for their abuse; yet she emphasized that not all Catholic abusers have been priests, for lay Church workers and volunteers also have been guilty.

She related that she has observed a serious lack of oversight of priests. Bishops do not have the time to see each priest every day, she said, and the lives of many priests are very isolated. Laity can play a role in observing priests, she suggested, and can help priests have healthy social relationships.

Regarding seminaries, McChesney warned that the Church has been emphasizing seminary formation, but selection of the men for the priesthood is far more important than formation: “To have a healthy presbyterate, you need to start with a healthy man.”

Among her disappointments were: some failures to act on many of the recommendations of lay review boards and survivors; a lack of research into the causes of abuse since the charter and why oversight failed; failure by the Church to embrace technology and to effectively use data and provide disclosure lists; and a lack of vision in ways to structure seminary formation.

McChesney predicted cases will continue against living bishops who are thought to be negligent in the way they handled the abuse claims; additional scandals will happen, either financial or sexual, whether in schools, other ministries or seminaries; a harder line will be taken by Church authorities due to Francis’s Motu Proprio; conservatives and liberals both will continue to use this issue to promote their own agendas; and civil, canon and criminal law will change, with a greater emphasis on vulnerable adults.

McChesney’s final prediction was “The Church will continue to be slow to reform. I think that shouldn’t be an option, but I think that sadly, that is the way this Church works.”

The University of Notre Dame also released last week the results of a study by McGrath Institute for Church Life and the Center for Applied Research in the Apostolate, “Sexual Harassment and Catholic Seminary Culture.” The results of the survey can be read at https://news.nd.edu/assets/335261/micl_cara_report_1_.pdf.