WARSAW, Poland (CNS) – A Ukrainian priest described escaping from his bombed-out parish in Mariupol and said he still hopes some Catholics will survive the relentless Russian onslaught.

Pauline Father Pavlo Tomaszewski said the decision to leave was not easy, “but when they started shelling the whole city, we realized we’d have to go.”

“They bombed and shelled us without any break for four days – since our monastery had no cellar for hiding in, we could see tall apartment blocks exploding in front of us,” said the priest, who comes from the western city of Kamenets-Podolsky but studied in neighboring Poland.

“Although there’d been water, food and gas and electricity supplies at the beginning, these were deliberately hit to cut off what people needed for daily survival. By the end, with no sense of time, we’d lost any contact with parishioners or with the outside world.” 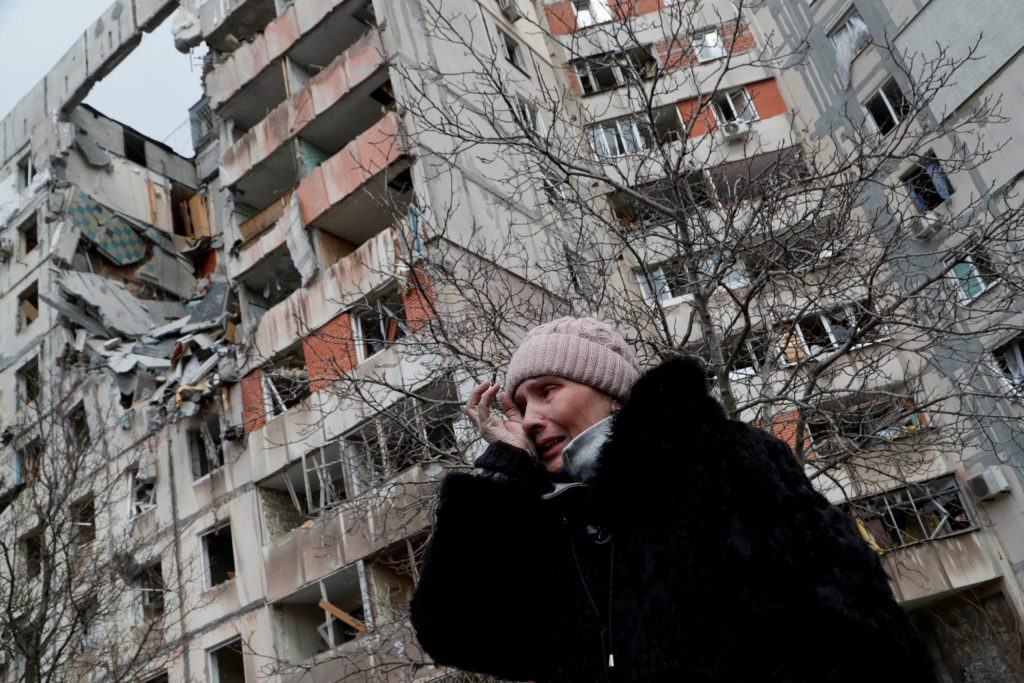 A woman reacts in front of destroyed apartment buildings in Mariupol, Ukraine, March 17, 2022. A theater in Mariupol, where hundreds of people are said to have taken shelter, has sustained heavy damage after it was bombed by Russian forces. (CNS photo/Alexander Ermochenko, Reuters)

The priest spoke at a March 18 virtual news meeting organized by the pontifical agency Aid to the Church in Need, as Russia’s Defense Ministry confirmed its forces were “tightening the noose” around Mariupol, a port city on the Sea of Azov. Up to 90% of all buildings in the city were reported damaged.

Father Tomaszewski said he had headed Mariupol’s Our Lady of Czestochowa Parish, incorporating multiple ethnicities, including Ukrainians and Russians, since 2011. He worked with two other priests and two St. Vincent de Paul nuns.

He said Catholics had begun leaving, “insecure and frightened,” in 2014, when fighting erupted with Moscow-backed separatists in the self-declared Donetsk People’s Republic, but said Russia’s Feb. 24 invasion had been “completely unexpected” and inflicted “unimaginable suffering.”

Since the invasion, Russian troops have attempted to capture Mariupol, a city of 446,000 between the Crimean Peninsula and Ukraine’s separatist-controlled Donbas region.

Father Tomaszewski said Russian forces had targeted civilians from the outset, bombing and shelling Mariupol’s eastern districts, but had intensified “atrocities against the innocent population” in retaliation for Ukrainian resistance.

The priest added that he had seen three women torn apart by an artillery shell when they went out in search of water.

In a March 16 TV message, Ukrainian President Volodymyr Zelenskyy said remaining inhabitants were now without food and water, and he compared the situation to the 1941-44 German siege of Leningrad, now St. Petersburg, Russia.

Russian forces were accused of bombing a Mariupol maternity hospital on March 9 and a historic theater sheltering local people on March 16, as well as shelling a Mariupol swimming pool complex housing women and children and a convoy of cars evacuating civilians. Although the incidents have been documented on video, Russians have denied the claims.

Father Tomaszewski said he and another Pauline priest had feared taking icons, chalices and other valuables with them, for fear of being robbed, when they headed north by car toward Zaporizhzhia.

He added that he had witnessed people “behaving like wild animals” on the way, along with leveled residential buildings and burned-out tanks. He said he and other refugees, now in a convoy of 100 cars, had expected to be shot when they were stopped by 40 heavily armed separatists at a checkpoint and told only women and children could pass.

“Some families had already run out of petrol. Though I saw women begging the soldiers on their knees to allow their menfolk to accompany them, the military insisted they’d received orders,” the priest said.

“Hours later, as if sent by God, a local villager arrived and offered to take us in so we wouldn’t freeze to death. Although some people were initially afraid to follow him off the main road, he and others were very kind, even giving us warm beds.”

Father Tomaszewski said most Catholic priests and nuns had resolved to stay with their communities nationwide, but added that some had been forced to flee as Russia’s “scorched-earth policy” destroyed local infrastructure.

He said he was unaware how many Mariupol Catholics had been killed and injured, but added that the war had created a “huge gulf” between Ukrainians and Russians who previously lived together peacefully.

“No images, pictures or videos can ever reproduce what it’s like to be caught up in this war – but our Church will always be with people, showing the face of Christ,” the priest said.

“While there’s no peace, all the diplomatic talks and discussions won’t help the ordinary men, women and children now being bombed and killed daily. Though I’m worried about the beautiful monastery and church I left behind, I’m also hopeful some of our parishioners may still be alive.”