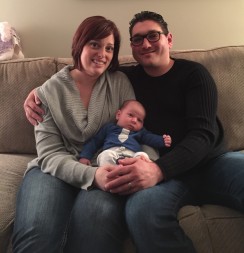 Pam and Nick Zehr are shown with their newborn son Max, who along with his father, will be baptized at the Easter Vigil Mass on April 4 at St. Vincent de Paul Church, Fort Wayne.

FORT WAYNE — Unpretentious and enthusiastic, Nick and Pam Zehr are counting their blessings alongside the days until both Nick and their newborn son, Maxwell, will be baptized at the Easter Vigil at St. Vincent de Paul Church in Fort Wayne.

Married just last year, the young couple has had an emotionally charged 10 months. Their diligent commitment to Mass and the weekly RCIA sessions has allowed God to deeply enhance their Catholic faith. There is an unmistakable presence, a spiritual energy in their home; and, the addition of their four-week-old son appears to have only made this spiritual journey all the more treasurable.

While Pam tended to the baby, Nick shared what originally brought him to his decision to become Catholic.

“From the beginning I loved how important Pam’s faith was to her, and her commitment to living it out,” Nick said. “She wanted the assurance that we would raise our children in the faith. As for me, she was happy to have me go to church with her, but never judged me when I didn’t. Nobody in her family cared that I wasn’t Catholic; they accepted me because of me.”

Expressing that it was community that drew him in, Nick said, “It was the St. Vincent community, but also Pam’s family with her siblings belonging to several neighboring parishes. I watched how they interacted with each other and even with strangers. Their hearts are all alike and open to love. That’s a community I wanted to be a part of.”

One of six children and the daughter of Bill and Ellen Gephart of St. Vincent Parish, Pam later reiterated Nick’s assessment of her family’s example. “It makes me very happy that he sees a faith practiced in our family that attracts him,” Pam said. “We try to not just preach our faith, but live it in our lives so that people might see something good.”

Nick clearly recalled what moved him from his decision to join the faith to the action of signing up for the RCIA program last fall.

“What pushed me over the edge was finding out we were having Max,” he said. “I had been attending church faithfully for over a year and I knew that I wanted us to be united under Christ’s love as parents.”

One week later Father Andrew Budzinski, parochial vicar, who had married the couple, made a pitch in his homily for those who were considering becoming Catholic. “When I met him in the gathering space after Mass, he just smiled and asked if I was ready to make the plunge,” Nick said.

Reflecting on the vast amount of knowledge the classes have offered, Nick said, “In one particular session, Father Andrew went through each part of the Mass, explaining the reasons behind everything we do. I had learned early on when to stand and what to say, but it was very powerful to finally know the theological reasons for doing everything.” Pam, who has accompanied her husband to every session, found the explanation of the one word response, “Amen,” very profound. “Now, whenever I say ‘Amen’ I remember it is my ‘yes,’ my way of saying in one word that ‘I believe and I would stake my life on that belief.’”

As one of the elect, Nick will receive the sacraments of Baptism, Confirmation and first Communion at the Easter Vigil. Joined by candidates for full communion (those who were baptized in another faith) there will be over 30 adults and children welcomed as new members into the faith community at St. Vincent.

Present with them, as they have been the entire journey, will be their sponsors.

“What a great guy. He has been so helpful and such an inspiration,” Nick noted of his own sponsor, Mark Wilder, who came into the Church only two years ago.

Julia Thill, in charge of the adult program, reflected on the role of sponsors in the RCIA process. “Mark and the others who come forth are just ordinary people. Usually a stranger who soon comes to be their confidant; parishioners who by the grace of God, live out their call and accompany the candidates and catechumens as they make this leap of faith.”

Teary eyed when they were first asked if they would like Maxwell to be baptized at the vigil, Nick elaborated, “We want our faith to be just as important to our children, and Max can always look back and say, ‘I was baptized with my dad!’ I pray that God will give us strength to continue on the path He has planned for us.”

Filled with anticipation, Nick has never experienced the Easter Vigil; Pam can scarcely contain her excitement knowing how the culmination of this journey will transform her family.