VATICAN CITY (CNS) — The ordination of Bishop Anthony Yao Shun of Jining in China’s Inner Mongolia autonomous region was the first episcopal ordination in the country following the provisional agreement signed in 2018 between China and the Vatican. The Aug. 26 ordination was “the first to take place in the framework of the provisional agreement” on the appointment of bishops, Matteo Bruni, director of the Vatican press office, said in a written statement Aug. 27. Details of that agreement were never made public. Bruni confirmed that Bishop Yao “received the papal mandate, as was also stated by the ordaining bishop during the ceremony” in China. Two days later, a second bishop was ordained; Father Stephen Xu Hongwei, 44, was ordained Aug. 28 as coadjutor bishop of Hanzhong in the northern state of Shaanxi. The Vatican approved Bishop Xu as a candidate in April, but, like Bishop Yao, there was a monthslong wait for the government to give the appointments the go-ahead, according to ucanews.com. Bishop Yao was ordained bishop by Bishop Paul Meng Qinglu of Hohhot, a vice chairman of the Chinese Catholic Patriotic Association. Three other bishops and more than 120 priests concelebrated, and 50 nuns and more than 1,000 Catholics attended the Mass.

SEATTLE (CNS) — The bishops of the Archdiocese of Seattle reiterated the Catholic Church’s opposition to assisted suicide in response to a news report about a man who used a fatal drug combination to end his own life under Washington state’s Death with Dignity Act. The Associated Press report Aug. 26 included a photo of Robert Fuller receiving a blessing at St. Therese Parish in Seattle a few days before his death and asserts that “Fuller’s decision (to end his life) was widely known and accepted among the parishioners.” Fuller was terminally ill and administered two syringes into his feeding tube to take his own life, the report said. The report raised concerns among Archbishop J. Peter Sartain and Coadjutor Archbishop Paul D. Etienne “because it may cause confusion among Catholics and others who share our reverence for human life,” the archdiocese said in a statement. At the time the photo was taken, “parish leadership was not aware of Mr. Fuller’s intentions,” it said. The priest in the photo, Jesuit Father Quentin Dupont, “was told Mr. Fuller was dying and wanted the blessing of the faith community.”

WASHINGTON (CNS) — The 1919 “Bishops’ Program for Social Reconstruction” was showcased in this year’s Labor Day statement to demonstrate how so many of the issues the bishops touched upon a century ago in the wake of World War I’s end still resonate in improving the conditions of workers today. “It is worth revisiting the ‘Bishops’ Program,’ which presented three themes from Catholic social teaching,” said Bishop Frank J. Dewane of Venice, Florida, chairman of the U.S. bishops’ Committee on Domestic Justice and Human Development, in the statement. The three themes Bishop Dewane highlighted were “subsidiarity, monopoly power and wage suppression”; “the universal destination of goods and employee ownership”; and “solidarity and unions.” Titled “On the Hundredth Year of the United States Bishops’ Program of Social Reconstruction,” the message, dated Sept. 2, was released Aug. 28. “Today’s economy, if measured by the stock market, has the most money and wealth it has ever had, and unemployment is around the lowest it has been in 50 years. And yet, roughly four in 10 Americans cannot afford an unexpected $400 bill, and would fall below the poverty line after three months without income,” Bishop Dewane said.

INDIANAPOLIS (CNS) — When Bishop Lucius Hre Kung of Hakha, Myanmar, visited St. Barnabas Parish in Indianapolis two years ago, a mere six families comprised the parish’s Hakha Chin Catholic refugee community. Visiting the refugees and parish again in early August, he was struck by the difference two years has made. “There is now a lot of joy and confidence and integrity in the (refugee) community,” Bishop Hre Kung said of the 200 Hakha Chin members of the parish. “There is a big difference. You can read it on their faces.” There was a smile on the bishop’s face as he spoke of his joy at the improvement among the people whom he knows have endured hardship and trauma. First came the flight for their lives from the violence, destruction and bloodshed of the decades-long conflict between Myanmar’s oppressive military junta and rebels opposing the government. Next came the hardship of living in refugee camps. St. Barnabas parishioner Paul Hnin, 35, recalls his own seven-year experience surviving in such conditions. “They have 15, 20 people living in a room this size,” he said, looking around the roughly 8-foot by 10-foot meeting room at St. Barnabas where he spoke with The Criterion, newspaper of the Archdiocese of Indianapolis. “And only one bathroom for these people. It is no good.” Then there was the struggle of adjusting to a new home with new challenges and a new language. Through it all, Father Daniel Mahan, St. Barnabas pastor, said, the Hakha Chins’ Catholic faith has been their refuge. “Many of them have suffered greatly through the years leading up to their arrival in the U.S,” he said. “And they have shown me that their faith is what has sustained them and what they treasure most.”

PROGRESO, Honduras (CNS) — Jesuit Father Ismael Moreno has watched migrants leave a crossroads in northern Honduras for decades, starting with his own brother, who left for the United States in 1989. In recent months, he has watched people close to him leave: a colleague at Radio Progreso — a station giving voice to social causes — the daughter of the radio station’s cleaner and his sister’s caretaker. The departures have come despite rhetoric toward migrants from U.S. President Donald Trump and his administration’s attempts to discourage asylum-seekers and turn the countries to the south of the U.S.-Mexico border into filters for impeding the path of migrants. “Trump can build all the walls he wants, can put the entire army along the length of the U.S.-Mexico border, can move the border south to Guatemala, can increase the dangers (of migrating), but it’s not going to diminish migration,” the priest said in the offices of Radio Progreso. “Migration is sustained here by an internal wall of accumulation, exclusion and violence.” Migration has marked the northern triangle countries of Central America for decades. But the outflow from Guatemala, Honduras and El Salvador has accelerated in recent years, taking the form of caravans at times and causing detentions to soar along the U.S. border.

VANCOUVER, British Columbia (CNS) — When archdiocesan Catholic Cemeteries director Peter Nobes first heard composting might emerge as an eco-friendly burial alternative, he thought it was a crazy idea. “I thought that would never be approved,” said Nobes. Then, it was. Washington became the first U.S. state to approve composting human remains May 21. The legislation, which will take effect by 2020, allows the body of a deceased person to be mixed with materials like wood chips and straw in a controlled environment to be composted. It also now allows alkaline hydrolysis, a process where a body is dissolved with chemicals and which is already legal in 19 other states. “There are some more environmentally friendly and safe ways of disposing of human remains” besides burial and cremation, Washington state Sen. Jamie Pedersen of Seattle said before the bill became law. He called recomposition and alkaline hydrolysis “wonderful options” that can show the world “a better way of dealing with this universal human experience” of death. But Nobes, who runs Gardens of Gethsemani cemetery just north of the border in Surrey, British Columbia, said these alternatives might make a smaller footprint on the environment, but do not offer a body the dignity it deserves. 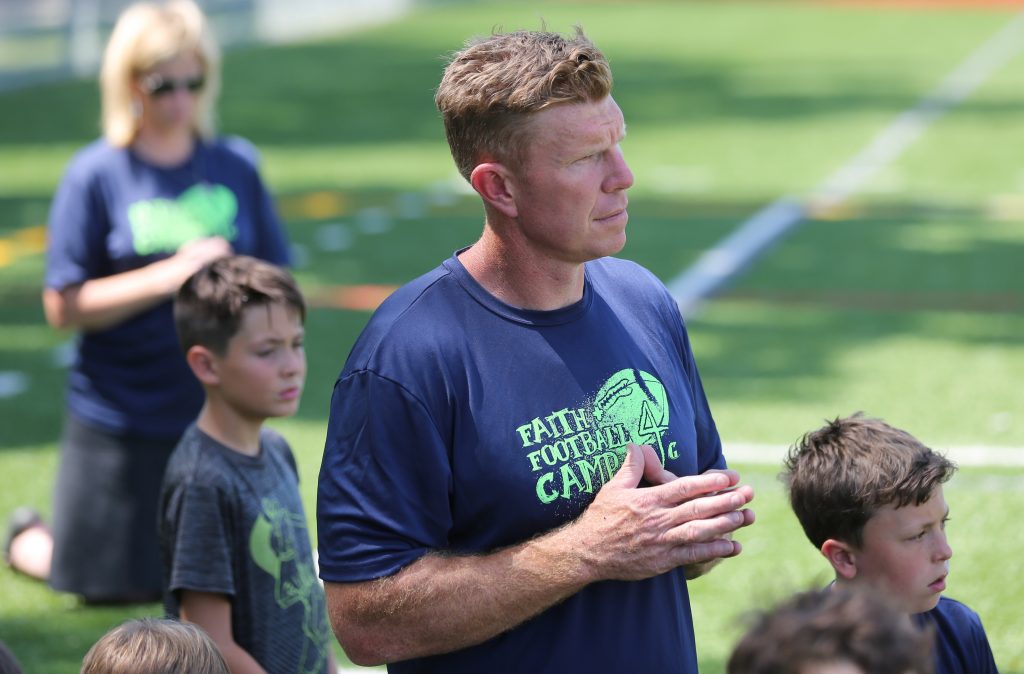 Matt Birk prays during eucharistic adoration at Faith and Football Camp Aug. 7, 2019, at Cretin-Derham Hall High School in St. Paul, Minn. Birk played for both the Minnesota Vikings and Baltimore Ravens; winning a Super Bowl with the Ravens. The three-day camp featured football drills and scrimmages mixed in with Mass, rosary, Stations of the Cross and adoration. (CNS photo/Dave Hrbacek, Catholic Spirit)